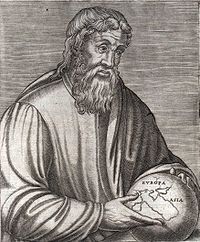 The Greek geographer Strabo in a 16th century engraving.

Strabo was born to an affluent family from Amaseia in Pontus (modern Amasya, Turkey),[2] a city which he said to be situated the approximate equivalent of 75 km from the Black Sea. Pontus had recently fallen to the Roman Empire, and although politically he was a proponent of Roman imperialism, Strabo belonged on his mother's side to a prominent family whose members had held important positions under the resisting regime of Mithridates the Great.[3] 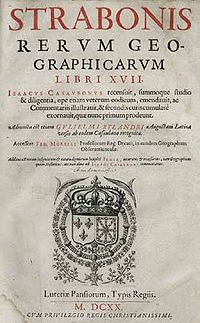 A page from Isaac Casaubon's 1620 edition of Geographica.

Strabo's life was characterized by extensive travels to Egypt and the Kingdom of Kush; as far west as coastal Tuscany and as far south as Ethiopia; in addition to his traverse of Asia Minor and time spent in Rome. Travel throughout the Mediterranean and Near East, especially of scholarly purposes, was popular during this era , as facilitated by the relative peace enjoyed throughout the reign of Augustus (27 BC - AD 14). He moved to Rome in 44 BC, and stayed there, studying and writing, until at least 31 BC. In 29 BC, on his way to Corinth (where Augustus was at the time), he visited the island of Gyaros in the Aegean Sea for several years. Around 25 BC, he sailed up the Nile until reaching Philae,[4] after which point there is little record of his proceedings until 17 AD, when he returned to Rome to finish compiling a final draft of his Geography during his final years.

It is not known precisely when Strabo's Geography was written, though comments within the work itself place the finished version within the reign of Emperor Tiberius. Some place its first drafts around 7 AD, others around 18 AD. Last dateable mention is given to the death in 23 AD of Juba II, king of Maurousia (Mauretania), who is said to have died "just recently".[5] On the presumption that "recently" means within a year, Strabo stopped writing that year or the next (24 AD), when he died.

The first of Strabo's major works, Historical Sketches (Historica hypomnemata), written while he was in Rome (ca. 20 BC), is nearly completely lost. Meant to cover the history of the known world from the conquest of Greece by the Romans, Strabo quotes it himself and other classical authors mention that it existed, although the only surviving document is a fragment of papyrus now in possession of the University of Milan (renumbered [Papyrus] 46).

Several different dates have been proposed for Strabo's death, but most of them conclude that he died shortly after 23 AD.

Strabo studied under several prominent teachers of various specialties throughout his early life[6], at different stops along his Mediterranean travels. His first chapter of education took place in Nysa (modern Sultanhisar, Turkey), under the master of rhetoric Aristodemus, who had formerly taught the sons of the very same Roman general who had taken over Pontus.[7][8] Aristodemus was the head of two schools of rhetoric and grammar, one in Nysa and one in Rhodes, the former of the two cities possessing a distinct intellectual curiosity of Homeric literature and the interpretation of epics. To this effect it should be noted that Strabo was indeed an admirer of Homer's poetry, perhaps a consequence of his time spent in Nysa with Aristodemus.[9]

Around the age of 20 Strabo then first moved to Rome, where he studied philosophy with the Peripatetic Xenarchus, a highly respected tutor in Augustus' court. Despite Xenarchus' Aristotelian leanings, Strabo later gives evidence to have formed his own Stoic inclinations.[10] In Rome he also learned grammar under the rich and famous scholar Tyrannion of Amisus.[11][12] Although Tyrannion was also a Peripatetic, he was more relevantly a respected authority on geography, a fact obviously significant considering Strabo's future contributions to the field. The final noteworthy mentor to Strabo is Athenodorus Cananites, a philosopher who had spent his life since 44 BC in Rome forging relationships with the Roman elite. Athenodorus endowed to Strabo three important items: his philosophy, his knowledge, and his contacts. Unlike the Aristotelian Xenarchus and Tyrannion that preceded him in teaching Strabo, Athenodorus was Stoic in mindset, almost certainly the source of Strabo's diversion from the philosophy of his former mentors. Secondly, from his own experiences he provided Strabo with information of regions of the empire that would eventually be incorporated in his Geography, specifically the cities of Tarsus, further south on Asia Minor than Strabo's Pontus, and Petra, just north of the Red Sea. Finally, Athenodorus' noteworthy relationship with individuals of influence, including Cicero and the Roman Emperor, undoubtedly aided Strabo's integration into Roman high society.

In general Strabo was very reverent of the academic process and valued his own education as integral for his various works. He is even quoted in expressing a responsibility that he felt to refer 'legends that have been taught us from boyhood' in his writings. Strabo supported the notion of a broad and multifarious education, consistent with the Greek and Roman approach to education characteristic of the Hellenistic era, that recommended an encyclopedic acquisition of knowledge as a means of attaining learned status in any of the primary realms of study. Given the multitude of respected intellectual mentors with which he was provided study, Strabo accumulated a substantial knowledge of terrestrial and celestial sciences, in addition to a worldly knowledge as developed from frequent interaction with eclectic but like-minded scholars. From this foundation he was thus prepared to contribute to the environment of popular knowledge, especially geographical knowledge, such as he did.

Strabo is mostly famous for his 17-volume work Geographica, which presented a descriptive history of people and places from different regions of the world known to his era.[5] 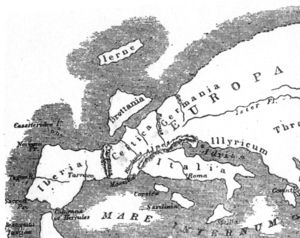 Map of Europe according to Strabo

Although the Geographica was rarely utilized in its contemporary antiquity, a multitude of copies are found throughout the Byzantine Empire. It first appeared in Western Europe in Rome as a Latin translation issued around 1469. Isaac Casaubon, classical scholar and editor of Greek texts, provided the first critical edition in 1587.

Although Strabo referenced the antique Greek astronomers Eratosthenes and Hipparchus and acknowledged their astronomical and mathematical efforts towards geography, he claimed that a descriptive approach was more practical, such that his works were designed for statesmen who were more anthropologically than numerically concerned with the character of countries and regions.

As such, Geographica provides a valuable source of information on the ancient world, especially when this information is corroborated by other sources. Within the books of Geographica is a map of Europe (see image at right).