From wiki.gis.com
Jump to: navigation, search
This article discusses surfaces from the point of view of topology. For other uses, see Differential geometry of surfaces, algebraic surface, and Surface (disambiguation). 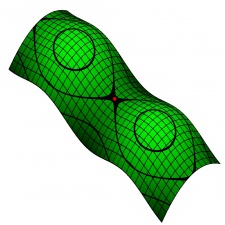 An open surface with X-, Y-, and Z-contours shown.

In mathematics, specifically in topology, a surface is a two-dimensional topological manifold. The most familiar examples are those that arise as the boundaries of solid objects in ordinary three-dimensional Euclidean space R3 — for example, the surface of a ball or bagel. On the other hand, there are surfaces which cannot be embedded in three-dimensional Euclidean space without introducing singularities or intersecting itself — these are the unorientable surfaces.

Surfaces find application in physics, engineering, computer graphics, and many other disciplines, primarily when they represent the surfaces of physical objects. For example, in analyzing the aerodynamic properties of an airplane, the central consideration is the flow of air along its surface.

More generally, a (topological) surface with boundary is a Hausdorff topological space in which every point has an open neighbourhood homeomorphic to some open subset of the upper half-plane H2. These homeomorphisms are also known as (coordinate) charts. The boundary of the upper half-plane is the x-axis. A point on the surface mapped via a chart to the x-axis is termed a boundary point. The collection of such points is known as the boundary of the surface which is necessarily a one-manifold, that is, the union of closed curves. On the other hand, a point mapped to above the x-axis is an interior point. The collection of interior points is the interior of the surface which is always non-empty. The closed disk is a simple example of a surface with boundary. The boundary of the disc is a circle.

The term surface used without qualification refers to surfaces without boundary. In particular, a surface with empty boundary is a surface in the usual sense. A surface with empty boundary and is compact is known as a 'closed' surface. The two-dimensional sphere, the two-dimensional torus, and the real projective plane are examples of closed surfaces.

In differential and algebraic geometry, extra structure is added upon the topology of the surface. This added structures detects singularities, such as self-intersections and cusps, that cannot be described solely in terms of the underlying topology.

Historically, surfaces were initially defined as subspaces of Euclidean spaces. Often, these surfaces were the locus of zeros of certain functions, usually polynomial functions. Such a definition considered the surface as part of a larger (Euclidean) spaces, and as such was termed extrinsic.

A surface defined as intrinsic is not required to satisfy the added constraint of being a subspace of Euclidean space. It seems possible at first glance that there are surfaces defined intrinsically that are not surfaces in the extrinsic sense. However, the Whitney embedding theorem asserts that every surface can in fact be embedded homeomorphically into Euclidean space, in fact into E4. Therefore the extrinsic and intrinsic approaches turn out to be equivalent.

In fact, any compact surface that is either orientable or has a boundary can be embedded in E³; on the other hand, the real projective plane, which is compact, non-orientable and without boundary, cannot be embedded into E³ (see Gramain). Steiner surfaces, including Boy's surface, the Roman surface and the cross-cap, are immersions of the real projective plane into E³. These surfaces are singular where the immersions intersect themselves.

The Alexander horned sphere is a well-known pathological embedding of the two-sphere into the three-sphere. 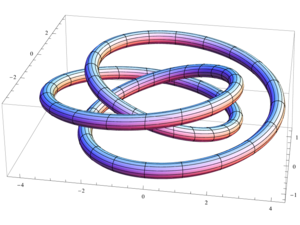 The chosen embedding (if any) of a surface into another space is regarded as extrinsic information; it is not essential to the surface itself. For example, a torus can be embedded into E³ in the "standard" manner (that looks like a bagel) or in a knotted manner (see figure). The two embedded tori are homeomorphic but not isotopic; they are topologically equivalent, but their embeddings are not.

If f is a smooth function from R³ to R whose gradient is nowhere zero, Then the locus of zeros of f does define a surface, known as an implicit surface. If the condition of non-vanishing gradient is dropped then the zero locus may develop singularities.

Each closed surface can be constructed from an oriented polygon with an even number of sides, called a fundamental polygon of the surface, by pairwise identification of its edges. For example, in each polygon below, attaching the sides with matching labels (A with A, B with B), so that the arrows point in the same direction, yields the indicated surface.

Any fundamental polygon can be written symbolically as follows. Begin at any vertex, and proceed around the perimeter of the polygon in either direction until returning to the starting vertex. During this traversal, record the label on each edge in order, with an exponent of -1 if the edge points opposite to the direction of traversal. The four models above, when traversed clockwise starting at the upper left, yield

The expression thus derived from a fundamental polygon of a surface turns out to be the sole relation in a presentation of the fundamental group of the surface with the polygon edge labels as generators. This is a consequence of the Seifert–van Kampen theorem.

Gluing edges of polygons is a special kind of quotient space process. The quotient concept can be applied in greater generality to produce new or alternative constructions of surfaces. For example, the real projective plane can be obtained as the quotient of the sphere by identifying all pairs of opposite points on the sphere. Another example of a quotient is the connected sum.

of M # N is the sum of the Euler characteristics of the summands, minus two:

The sphere S is an identity element for the connected sum, meaning that S # M = M. This is because deleting a disk from the sphere leaves a disk, which simply replaces the disk deleted from M upon gluing.

Connected summation with the torus T is also described as attaching a "handle" to the other summand M. If M is orientable, then so is T # M. The connected sum is associative so the connected sum of a finite number of surfaces is well-defined.

The classification theorem of closed surfaces states that any closed surface is homeomorphic to some member of one of these three families:

The surfaces in the first two families are orientable. It is convenient to combine the two families by regarding the sphere as the connected sum of 0 tori. The number g of tori involved is called the genus of the surface. Since the sphere and the torus have Euler characteristics 2 and 0, respectively, it follows that the Euler characteristic of the connected sum of g tori is 2 − 2g.

Relating this classification to connected sums, the closed surfaces up to homeomorphism form a monoid with respect to the connected sum. The identity is the sphere. The real projective plane and the torus generate this monoid. In addition, there is a relation P # P # P = P # T – geometrically, connect sum with a torus (# T) adds a handle with both ends attached to the same side of the surface, while connect sum with a Klein bottle (# K = # P # P) adds a handle with the two ends attached to opposite sides of the surface; in the presence of a projective plane, the surface is not orientable (there is no notion of side), so there is no difference between attaching a torus and attaching a Klein bottle, which explains the relation.

There are a number of proofs of this classification; most commonly, it relies on the difficult result that every compact 2-manifold is homeomorphic to a simplicial complex.

A closely related example to the classification of compact 2-manifolds is the classification of compact Riemann surfaces, i.e., compact complex 1-manifolds. (Note that the 2-sphere, and the tori are all complex manifolds, in fact algebraic varieties.) Since every complex manifold is orientable, the connected sums of projective planes do not qualify. Thus compact Riemann surfaces are characterized topologically simply by their genus. The genus counts the number of holes in the manifold: the sphere has genus 0, the one-holed torus genus 1, etc.

Polyhedra, such as the boundary of a cube, are among the first surfaces encountered in geometry. It is also possible to define smooth surfaces, in which each point has a neighborhood diffeomorphic to some open set in E². This elaboration allows calculus to be applied to surfaces to prove many results.

Two smooth surfaces are diffeomorphic if and only if they are homeomorphic. (The analogous result does not hold for higher-dimensional manifolds.) Thus closed surfaces are classified up to diffeomorphism by their Euler characteristic and orientability.

Smooth surfaces equipped with Riemannian metrics are of fundational importance in differential geometry. A Riemannian metric endows a surface with notions of geodesic, distance, angle, and area. It also gives rise to Gaussian curvature, which describes how curved or bent the surface is at each point. Curvature is a rigid, geometric property, in that it is not preserved by general diffeomorphisms of the surface. However, the famous Gauss-Bonnet theorem for closed surfaces states that the integral of the Gaussian curvature K over the entire surface S is determined by the Euler characteristic:

This result exemplifies the deep relationship between the geometry and topology of surfaces (and, to a lesser extent, higher-dimensional manifolds).

Every closed orientable surface admits a complex structure. Complex structures on a closed oriented surface correspond to conformal equivalence classes of Riemannian metrics on the surface. One version of the uniformization theorem (due to Poincaré) states that any Riemannian metric on an oriented, closed surface is conformally equivalent to an essentially unique metric of constant curvature. This provides a starting point for one of the approaches to Teichmüller theory, which provides a finer classification of Riemann surfaces than the topological one by Euler characteristic alone.

A complex surface is a complex two-manifold and thus a real four-manifold; it is not a surface in the sense of this article. Neither are algebraic curves or surfaces defined over fields other than the complex numbers.