In a graphical user interface on a computer monitor a toolbar is a GUI widget on which onscreen buttons, icons, menus or other input or output elements are placed.

Earlier forms of toolbars were defined by the programmer and had set functions, and thus there was no difference between a toolbar with buttons and just a row of buttons. Most modern programs and operating systems however, allow the end user to modify and customize toolbars to fit their personal needs. Some prominent examples of customizable toolbars are panels of the GNOME and KDE desktop environments, functions of which range from expandable menus and buttons for applications, window lists, notification areas, clocks and resource monitors to volume controls and weather report widgets. 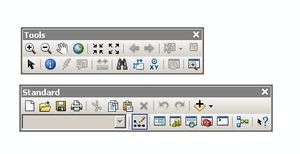 Some applications, e.g. graphics editors, allow their toolbars to be detached and moved between windows and other toolbars.

The first toolbar appeared on the Xerox Alto computer in 1973.[citation needed]

Toolbars are seen in office suites such as OpenOffice.org, graphics editors such as Inkscape and Web browsers such as Mozilla Firefox.

Toolbars implemented as Web browser plug-ins have become a popular advertising platform for major brands such as Google and Yahoo, as well as smaller spyware and malware vendors. Browser toolbars are commonly bundled with installers for other "partner" products as an "opt-out" default without the user's explicit consent.[1] Not all toolbars are bundled with spyware or malware. Toolbars from search engine providers such as the Google Toolbar or from toolbar creators such as Conduit_(Web_site) are certified spyware and malware free.

Browser toolbars provide helpful and useful functionality such as additional search fields, form-fill, links back to popular sites, malware detection, etc. However, their primary purpose is generally to collect anonymous marketing statistics or reinforce a brand (by displaying the logo at the top of each browser window).[2] As plug-ins to the web browser application, toolbars can also sometimes degrade performance or create compatibility problems.[3]

An example of a web browser toolbar, the Google toolbar, in Firefox

A bookmarks toolbar or favorites toolbar features in a number of modern web browsers, including Mozilla Firefox,[4] Safari, and Google Chrome, and serves as a means of persistently presenting a user's most necessary Web bookmarks. Folders of bookmarks (and, in the case of Firefox, live bookmarks of web feeds) are represented in a bookmark toolbar as drop-down lists which display the titles and (if the site was already visited and cached) favicons of bookmarked websites.