Topography as the study of place 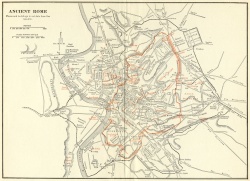 The Topography and Monuments of Ancient Rome

Starting in ancient Greece, places have been described in topography (τοπογϝαφία), and an author of such writing has been called a topographer (τοπογϝάφος). Greek and Roman topographers provide much of the basis of modern reconstructions of the fabric of the cities of Classical times, and especially that of Rome.[1]

The first systematic topographer was the English antiquary, John Leland (1503–1552). King Henry VIII gave him a warrant to search all the libraries of monasteries and colleges of the kingdom to rescue the records of ancient writers of England and other nations.[2]

This inspired Leland to record other particulars of the places where the records were kept and which the records mentioned.

In 1546, he wrote that he had so travelled by the sea coasts and the middle parts for six years, that there was "almost neither cape nor bay, haven, creek or pier, river or confluence of rivers, breaches, washes, lakes, meres, fenny waters, mountains, valleys, moors, heaths, forests, woods, cities, boroughs, castles, principal manor places, monasteries, and colleges, but I have seen them, and noted things very memorable".

His intention was to make a great map of England and Wales, and to write the first detailed topographical description of them – but he died in 1552.

However, his researches laid the foundations on which others were to build: Lambarde's "Perambulation of Kent" (1576), Richard Carew's "Survey of Cornwall" written in the 1590s and George Owen's "Description of Pembrokeshire" (1603), established in the world the science and art of Topography.

The most famous of these topographers then was William Camden, who was praised by both Edmund Spenser and Ben Jonson.

While topography remained a subject of some interest, by the 19th century much of its work had been taken up by the authors of guide books such as Baedeker, the predecessors of modern tourguides. Thus topography as a serious descriptive field "degenerated" into tourist literature. Much of the serious work in topography evolved into what we today call local history.

In the twentieth century, while a few remnants of the old usage remained (see for example the London Topographical Society), in general topography came to refer to the study specifically of landforms.