From wiki.gis.com
Jump to: navigation, search
Not to be confused with topography.

A Möbius strip, an object with only one surface and one edge. Such shapes are an object of study in topology. 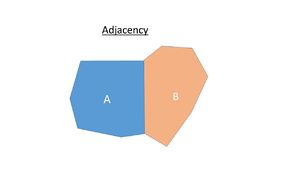 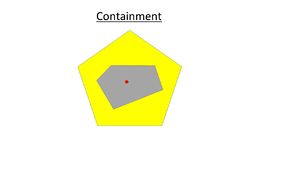 In geodatabases, a topology is a set of rules that defines how point, line, and polygon features share coincident geometry. Topology describes the means whereby lines, borders, and points meet up, intersect, and cross. This includes how street centerlines and census blocks share common geometry, and adjacent soil polygons share their common boundaries. Another example could be how two counties that have a common boundary between them will share an edge, creating a spatial relationship.

Common terms used when referring to topology include: dimensionality, adjacency, connectivity, and containment, with all but dimensional dealing directly with the spatial relationships of features.

Topology defines and enforces data integrity rules (there should be no gaps between polygons). It supports topological relationship queries and navigation (navigating feature adjacency or connectivity), sophisticated editing tools, and allows feature construction from unstructured geometry (constructing polygons from lines).

Addressing topology is more than providing a data storage mechanism. In GIS, topology is maintained by using some of the following aspects:

2. Most GIS programs include a set of tools for query, editing, validation, and error correction of topology.

3. GIS software can navigate topological relationships, work with adjacency and connectivity, and assemble features from these elements. It can identify the polygons that share a specific common edge; list the edges that connect at a certain node; navigate along connected edges from the current location; add a new line and "burn" it into the topological graph; split lines at intersections; and create resulting edges, faces, and nodes.

Elements of a geodatabase topology

In a geodatabase, the following properties are defined for each topology: 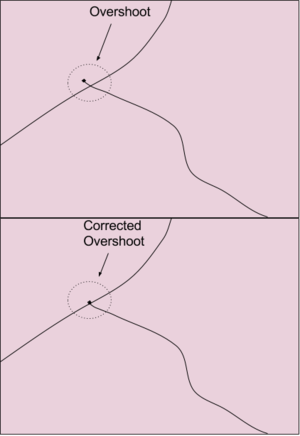 An example of overshoot before and after topological correction.

Topological errors can occur when data is scanned or digitized. They can be the result of human or computer error. They can also occur when raster data is turned into vector data. In both cases, vector lines are created but then must be further processed to form topologically correct relationships, especially when creating polygons [4]. Some examples of this include: overshoot, undershoot, sliver polygons, unclosed polygons, and mismatching adjacent polygons. Topological errors are dangerous to geographic information systems because they break the relationship between features which prohibits correct analyses from being performed[5]. These errors can be corrected by a variety of tools available in different geographic information systems. Most of these tools are able to look at problem areas and extend lines that don’t quite meet or fill in gaps in polygons within a certain tolerance that is set by the user.