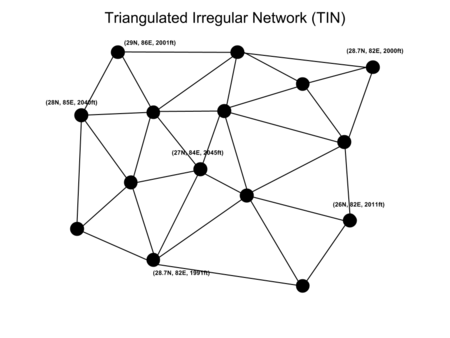 A simple example of how the triangulation of (x,y,z) coordinates works.

A Triangulated Irregular Network (TIN) (triangulate ['traɪæ ɳgjʊleɪt] verbo transitivo triangular) is a digital data structure used in a geographic information system (GIS) for the representation of a surface. A TIN is a vector based representation of the physical land surface or sea bottom, made up of irregularly distributed nodes and lines with three dimensional coordinates (x,y, and z) that are arranged in a network of nonoverlapping triangles. TINs are often derived from the elevation data of a rasterized digital elevation model (DEM). An advantage of using a TIN over a DEM in mapping and analysis is that the points of a TIN are distributed variably based on an algorithm that determines which points are most necessary to an accurate representation of the terrain. Data input is therefore flexible and fewer points need to be stored than in a DEM with regularly distributed points. While a TIN may be less suited than a DEM raster for certain kinds of GIS applications, such as analysis of a surface's slope and aspect, TINs have the advantage of being able to portray terrain in three dimensions. However, TINs have disadvantages and are not suitable for every project. When using TINs, details on the actual triangles may be lost. Also, because TINs are linear, many edges will appear jagged, distorting the image. [1]

Triangulated Irregular Network represents a topographic elevation surface by a tessellation of non-overlapping triangles, with elevations at their corners. Three-dimensional visualizations are readily created by the rendering of the triangular facets. In regions where there is little variation in surface height, the points may be widely spaced whereas in areas of more intense variation in height the point density is increased.

A TIN is typically based on a Delaunay triangulation but its utility will be limited by the selection of input data points: well-chosen points will be located so as to capture significant changes in surface form, such as topographical summits, breaks of slope, ridges, valley floors, pits and cols.

It is technically possible to generate a TIN with overlapping facets.[2] Such TINs can be useful for modelling certain geographic features, including overhangs and caves; however, not all GIS packages are designed to handle such TINs. The portion of a TIN that does not self-overlap is sometimes referred to as functional terrain.

A TIN showing both land and the sea floor

Although usually associated with 3-dimensional data (x,y, and z) and topography, TINs are also useful for the description and analysis of horizontal (x and y) distributions and relationships.

The first triangulated irregular network program for GIS was written by Randolph Franklin at Simon Fraser University in 1973.[3]