A typeface is a set of characters that share common visual characteristics. Each typeface consists of different symbols, or glyphs, that have symbolic meaning. A character may symbolize a single letter in an alphabet or an entire phrase or object.

The term typeface is frequently interchanged with the term font. However, these two words describe different typographic elements. While typeface is a set of characters that share common traits, font is the term used to distinguish typefaces with varying characteristics. A typeface can be considered a family of fonts. The font describes appearance changes that are applied to those characters. See Font for more details.

Cartographers must be aware of how different typefaces will appear in different mediums. When selecting a typeface, one should consider how it will be displayed. The two main typeface classes are text and display.

Letter style has evolved through the centuries, beginning with Roman times. Modern-day alphabets descend from capital letters Romans carved into stone, and later wrote on manuscripts.[1] The first movable-type printing press was invented in the fifteenth century by Johannes Gutenberg [2]. By the year 1500, many type foundries were in operation across Europe. Craftsmen would first engrave a letter-punch, which was used to make a matrix. The matrix served as a cast for the creation of sorts. Sorts were the small, square bits of metal that served as the "stamps" that could be arranged on a composing stick and transferred to a form, which was inked and pressed into a sheet of paper or vellum [3]. These craftsmen created some of the first typefaces in history and paved the way for modern type foundries that design and distribute typefaces, usually as digitized fonts.

Text typefaces are designed to be readable at small sizes in large blocks of printed material. Legibility is the main function of text type. These are usually designed to be clean, and simple, and practical rather than fancy. That said, well-designed text faces are not necessarily boring, but can add a subtle aesthetic feel to text such as map labels. In fact, some cartographers, such as National Geographic, have designed their own proprietary typefaces to add a unique corporate feel to their maps. 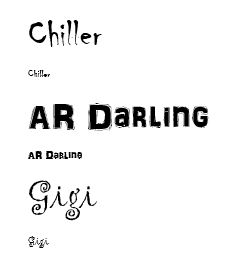 Examples of display type in 30pt font and 12pt font.

Display typefaces are designed primarily for an aesthetic effect, with legibility often being of secondary importance. These are often more ornate and stylized and are typically difficult to read in small sizes or in large blocks. Therefore, they are typically only used in large sizes for specific purposes. In maps, they are typically avoided for map labels but can be used in limited uses such as in a Map Title to convey a particular aesthetic.[4].

Type style defines the design character of the type.[5][6] This includes elements such as serifs, which finish off the main stroke of a letter with a smaller line with varying line thickness. Sans-serif, sans meaning "without", is a type style that contains only straight lines. 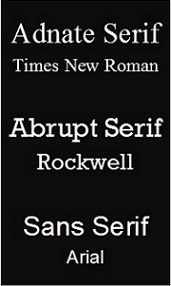 Examples of serif and sans-serif.

While there are numerous kinds of serif typefaces, there are two main types: adnate and abrupt. Adnate serif is more organic and "flowing" with the font and is commonly distinguished with its use of curves. Abrupt serif, as the name suggests, is squarer and more rigid and does not flow into the base letter form. Sans-serif fonts are the more modern of the two fonts.

Both styles of typeface have their advantages and disadvantages. The main, and often most important, is the ease of readability. Serif typefaces are known for helping a reader when found on printed material, such as a novel. On the other hand, sans-serif typefaces are much easier to read when found on screens, such as in a blog post. For these reasons, when selecting typefaces it is important to keep in mind on which medium your type will be viewed most frequently.

Serif fonts are typically used in the body of printed works because the individual letters are distinct and easy to read. Therefore, serifed fonts are the overwhelming typeface choice for lengthy text printed in books, newspapers and magazines. Generally, serif fonts are utilized to create a more regimented block body of text, similar to those used in traditional printing. Serifs are widely used for historical information or on a historical map.

Books produced for children are often printed with sans-serif text on account of teachers claiming that the simplicity of the letter shapes makes them more recognizable. On the same facet, sans-serif fonts are optimal for a cleaner appearance in places such as headers, titles, legends, or natural features.

Sans-serif fonts are typically used for online work because they have a less complex shape and are easier to read at lower resolutions. [8].

Generally, sans-serif fonts are not for large bodies of text in print, but instead are ideal for the internet. When typefaces are digitized for use on computers, the letter forms have to fit within a relatively small pixel grid, often leading to what are called the “jaggies”. Many web professionals claim that this relatively low resolution cannot render effectively enough the fine finishing strokes of serif typefaces, and that sans-serif typefaces come out cleaner and thus more legible.