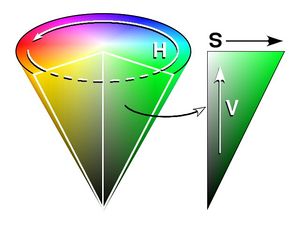 In this illustration of the HSV color model, value is represented by the vertical axis (labeled by V)

The Value' (also called lightness or luminosity) of a color is a measure of how light or dark a color is while its hue is held constant. [1]

There are various scales that record the value of lightness. One of these scales is called the CIE lightness scale. This scale is used in Photoshop and other programs. The scale is made from, “CIE luminance by a modified cube root relationship (Yn= luminance of white):”[2] 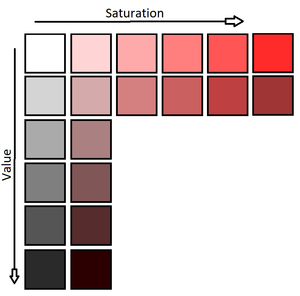 Value is often combined with saturation to design maps using either a color or a grayscale model [3]. Normally darker values and more saturated colors indicate more of a certain quantity on a map. Quantity can also be shown in the absence of color by delineating shades of gray [4]. For example, a map displaying population density across a region will have higher color values and more saturation as the density becomes higher. The choice of which value to use and what it represents is left up to the cartographer.

Value may be combined with hue and/or saturation to provide more clarity or convey more information in maps. A map displaying income may employ two hues, red and green. As colors increase in value, they display distance from the mean income. Red may represent all values lower than the mean, while green represents values greater than the mean.