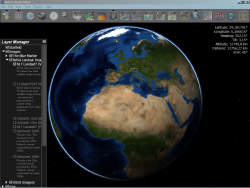 A virtual globe is a 3D software model or representation of the Earth or another world. A virtual globe provides the user with the ability to freely move around in the virtual environment by changing the viewing angle and position. Compared to a conventional globe, virtual globes have the additional capability of representing many different views on the surface of the Earth. These views may be of geographical features, man-made features such as roads and buildings, or abstract representations of demographic quantities such as population.

Virtual globes may be used for study or navigation (by connecting to a GPS device) and their design varies considerably according to their purpose. Those wishing to portray a visually accurate representation of the Earth often use satellite image servers and are capable not only of rotation but also zooming and sometimes horizon tilting. Very often such virtual globes aim to provide as true a representation of the world as is possible with worldwide coverage up to a very detailed level. When this is the case the interface often has the option of providing simplified graphical overlays to highlight man-made features since these are not necessarily obvious from a photographic aerial view. The other issue raised by such detail available is that of security with some governments having raised concerns about the ease of access to detailed views of sensitive locations such as airports and military bases.

Another type of virtual globe exists whose aim is not the accurate representation of the planet but instead a simplified graphical depiction. Most early computerized atlases were of this type and, while displaying less detail, these simplified interfaces are still widespread since they are faster to use because of the reduced graphics content and the speed with which the user can understand the display.

As more and more high-resolution satellite imagery and aerial photography become accessible for free, many of the latest online virtual globes are built to fetch and display these images. They include:

As well as the availability of satellite imagery, online public domain factual databases such as the CIA world factbook have been incorporated into virtual globes.

Although by default the World Wind download only comes with public domain imagery from the USGS and Landsat 7, Community members have made available high resolution imagery for New Zealand and New York, here and additional countries, as well as Microsoft's Virtual Earth data (for non-commercial purposes)

Google Earth, NASA World Wind and Norkart Virtual Globe save a cache of downloaded imagery to the user's hard disk, enabling them to be used offline to view previously viewed areas. However, you cannot activate Google Earth without logging into its server for the first time.

The Google Earth's cache size is limited to 2000 MB whereas World Wind has no limit on cache size. In Norkat Virtual Globe the disk cache can be set by the user.

World Wind is also capable of displaying MODIS imagery from the JPL Aqua and Terra satellites. An Add-on allows for near-real-time MODIS imagery.

Google Earth and Virtual Earth 3D are both capable of displaying many more urban areas in high-resolution thanks to their private image sources. Both companies also hire chartered flights over major cities of the U.S. to take aerial images.

Marble (KDE) is designed for use in lightweight environments without 3D hardware acceleration and is capable of not only being used as a standalone application, but also as a component in other applications, such as in a "World Clock" Plasma (KDE) and for geolocation in the photo management software Digikam.[1]

The use of virtual globe software was widely popularized by (and may have been first described in) Neal Stephenson's famous science fiction novel Snow Crash. In the metaverse in Snow Crash there is a piece of software called Earth made by the Central Intelligence Corporation. The CIC uses their virtual globe as a user interface for keeping track of all their geospatial data, including maps, architectural plans, weather data, and data from real-time satellite surveillance.

Virtual globes (along with all hypermedia and virtual reality software) are distant descendants of the Aspen Movie Map project, which pioneered the concept of using computers to simulate distant physical environments (though the Movie Map's scope was limited to the city of Aspen, Colorado).

Many of the functions of virtual globes were envisioned by Buckminster Fuller who in 1962 envisioned the creation of a Geoscope which would be a giant globe connected by computers to various databases. This would be used as an educational tool to display large scale global patterns related to topics such as economics, geology, natural resource use, etc.[2]