Visual hierarchy is the apparent order of importance of phenomena perceived by the human eye. As the viewer organizes the visual field, some objects naturally appear more important than others. In cartography, this principle is a fundamental part of map composition; since the goal of map composition is to clearly convey a desired purpose, the attention of readers should be focused on the map elements that are most relevant to the purpose. Not all map elements are given the same visual importance; if they are (i.e., there is a lack of Contrast), the map becomes difficult to read.[1] Visual hierachy can be achieved by manipulating the symbology of the objects on the map using a combination of visual variables such as size, color, and texture.[2]

Visual Hierarchy in the Gestalt Process

Visual hierarchy is related to Gestalt psychological theory, which proposes that the brain has inherent organizing characteristics. The theory suggests that people subconsciously notice certain objects before others. It states that the human mind tends to "structure individual elements, shapes or forms into a coherent, organized whole."[3] When presented with a picture, map, or other visual stimuli, the brain will take individual elements of the scene and organize them into a whole. 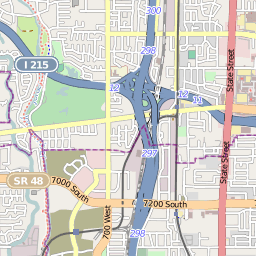 The white minor streets are similar in appearance to the gray background, so at first glance they form a gestalt of a mottled gray texture. The thick blue and red highways contrast sharply with this whole, making them stand out as important.

Visual hierarchy is established as the viewer notices exceptions to the whole; elements that most sharply contrast from the pattern of the whole draw attention. The greater the disconnect of an object from its surroundings (the whole), the more the brain highlights it as important to take note of. For example, the fluorescent color of tennis balls contrast with their surroundings, making it easier for a tennis player to focus on during high-speed play.[4] An example in cartography is that a bold title in a large font will draw the attention of the viewer first before a smaller, unbolded subtitle.[5][6][7][8]

The relative visual importance of an element in a map, also known as its visual weight, is the tendency of the element to attract the attention of the map reader away from other elements. This weight is not only relevant to visual hierarchy--it also is the fundamental principle for establishing Balance in a design work. In his consideration of the psychological underpinnings of visual balance, Arnheim states that the following properties contribute to visual weight:[9]

Many of these properties are closely aligned with the visual variables listed by Bertin and others, and can be directly controlled through the design of map symbols to establish a desired hierarchy. However, some properties are inherent to the geographic characteristic of the phenomena being represented (e.g., the meandering shape of a river, the size of a lake, the ruggedness of the terrain), and are more difficult for the cartographer to manipulate. In these cases, other means will need to be used to adjust the inherent weight to that desired. For example, a large lake or a complex shaded relief could be subdued through the use of color (lighter value).

Visual Hierarchy applies to the whole map layout, and not just the map image. Well-designed maps will have titles, legends, scale bars, inset maps, texts, and so on that fit within a hierarchy of their own relative to the map image, preferably matching an intended order of importance. An example of this is the map title, which is generally very important to map readers understanding the purpose of the map; therefore, it should be one of the first things the reader notices. The map legend is very useful for making sense of the map, but is of minor importance compared to the map itself. Factors such as size, color, position, transparency, font, and Negative space all apply to map layout and how it affects the visual hierarchy of the map.[11]

1. The F' and 'Z' principle, which studies have shown to be the patterns eyes follow when scanning a page to decide if it is worth reading or not. Making sure the title is readable and interesting is important to ensuring the map is used and choosing the pattern of the map itself plays a big role in whether or not it will be successful in broadcasting statistics and facts.

2. Bigger objects signify greater importance, they also attract the attention of the user. Important symbols and objects should be larger in size while symbols used for reference should be smaller.

3. Negative space. Negative space also known as “white space,” negative space is the empty space on a map that is available for placing map elements such as a legend, North arrow, scale bar, etc. The contrast created by the negative space against the map elements help to establish a visual hierarchy for the features. The more an element contrasts with its surrounding negative space, the more attention it will attract. An element that is surrounded by a large white area will stand out more than the same element on a complex background. However, using too much negative space can cause the opposite effect.

Maps that use negative space unwisely become cluttered and may therefore fail to convey their desired message.[12]

4. Symbology. Just as bigger objects signify greater importance, the type of symbol used ranks its importance as well as its relevance. Symbols that relate to the theme of the map are enhancing while symbols that appear to be random can be confusing and disorienting.