From wiki.gis.com
Jump to: navigation, search
For other uses, see WYSIWYG (disambiguation).

WYSIWYG (pronounced /ˈwɪziˌwɪg/[1]), is an acronym for What You See Is What You Get, used in computing to describe a system in which content displayed during editing appears very similar to the final output,[2] which might be a printed document, web page, slide presentation or even the lighting for a theatrical event.

The phrase was originally a catch phrase popularized by Flip Wilson's drag persona "Geraldine" (from Rowan & Martin's Laugh-In in the late 60s and then on The Flip Wilson Show until 1974), who would often say "What you see is what you get" to excuse her quirky behavior.

WYSIWYG implies a user interface that allows the user to view something very similar to the end result while the document is being created. In general WYSIWYG implies the ability to directly manipulate the layout of a document without having to type or remember names of layout commands. The actual meaning depends on the user's perspective, e.g. 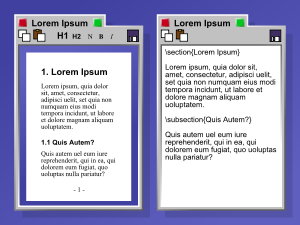 Modern software does a good job of optimizing the screen display for a particular type of output. For example, a word processor is optimized for output to a typical printer. The software often emulates the resolution of the printer in order to get as close as possible to WYSIWYG. However, that is not the main attraction of WYSIWYG, which is the ability of the user to be able to visualize what he or she is producing.

In many situations, the subtle differences between what you see and what you get are unimportant. In fact, applications may offer multiple WYSIWYG modes with different levels of "realism," including

Applications may deliberately deviate or offer alternative composing layouts from a WYSIWYG because of overhead or the user's preference to enter commands or code directly. 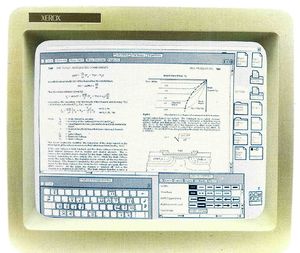 Before the adoption of WYSIWYG techniques, text appeared in editors using the same typeface and style with little indication of layout (margins, spacing, etc.). Users were required to enter special non-printing control codes (now referred to as markup code tags) to indicate that some text should be in boldface, italics, or a different typeface or size.

These applications typically used an arbitrary markup language to define the codes/tags. Each program had its own special way to format a document, and it was a difficult and time consuming process to change from one word processor to another.

Using markup codes remains popular today for some basic text editing applications due to the simplicity of using tags to store complex formatting information that the editor cannot display. But when the tags are visible in the editor, all the unformatted text must flow to the right and downward, moving the text out of place from where it would actually appear when printed in the final form.

Bravo, a document preparation program for the Alto produced at Xerox PARC by Butler Lampson, Charles Simonyi and colleagues in 1974, is generally considered the first program to incorporate WYSIWYG technology, displaying text with formatting (e.g. with justification, fonts, and proportional spacing of characters). The Alto monitor (72 pixels per inch) was designed so that one full page of text could be seen and then printed on the first laser printers. When the text was laid out on the screen 72 PPI font metric files were used, but when printed 300 PPI files were used — thus one would occasionally find characters and words slightly off, a problem that continues to this day. (72 PPI came from a new measure of 72 "PostScript points" per inch. Prior to this, the standard measure of 72.27 points per inch was used in typeface design, graphic design, typesetting and printing.)

Bravo was never released commercially, but the software eventually included in the Xerox Star can be seen as a direct descendant of it.[4]

In parallel with but independent of the work at Xerox PARC, Hewlett Packard developed and released in late 1978 the first commercial WYSIWYG software application for producing overhead slides or what today is called presentation graphics. The first release, named "BRUNO" (after an HP sales training puppet), ran on the HP-1000 minicomputer taking advantage of HP's first bit-mapped computer terminal. BRUNO was then ported to the HP-3000 and re-released as "HP Draw".

In the 1970s and early 1980s, most popular home computers lacked the sophisticated graphics capabilities necessary to display WYSIWYG documents, meaning that such applications were usually confined to limited-purpose high end workstations (such as the IBM Displaywriter System) that were too expensive to be afforded by the general public. Towards the mid 1980s, however, things began to change. Improving technology allowed the production of cheaper bitmapped displays, and WYSIWYG software started to appear for more popular computers, including LisaWrite for the Apple Lisa, released in 1983, and MacWrite for the Apple Macintosh, released in 1984.

The first attempts at WYSIWYG word processors for IBM PC compatible computers allowed the user to only preview the final form of the document on-screen, as a non-editable graphical display. WordPerfect 5.2 offered this, still using the old text-only markup language for the primary document editing, and allowing the user to briefly switch to a graphical mode to see how the document would look when printed. This final rendering was computationally intensive and was consequently slow and clumsy. It was not until adoption of Microsoft Windows began in earnest that WYSIWYG truly came to the PC platform, eventually leading to Microsoft Word (an application developed under the supervision of Charles Simonyi, who had joined Microsoft in 1981) becoming the market leader in WYSIWYG word processing. The first WYSIWYG version of Word for the Mac was in January 1985. The first version of Word for Windows was released November 1989.

Origination of this phrase from one of the engineers (Larry Sinclair) at Triple I (Information International) to express the idea that what you see on the screen is what you get on the printer on the "Page Layout System" a pre-press typesetting system at the time called the "AIDS system - Automated Information Documentation System first prototype shown at ANPS in Las Vegas and bought right off the showroom floor by the Pasadena Star News that year.

The phrase was originated by a newsletter published by Arlene and Jose Ramos, called WYSIWYG. It was created for the emerging Pre-Press industry going electronic in the late 1970s. After three years of publishing, the newsletter was sold to employees at the Stanford Research Institute in California.

Seybold and the researchers at PARC were simply reappropriating a popular catch phrase of the time originated by "Geraldine", Flip Wilson's drag persona from Rowan & Martin's Laugh-In in the late 60s and then on The Flip Wilson Show, (1970–1974).[5][6]

Because designers of WYSIWYG applications typically have to account for a variety of different output devices, each of which has different capabilities, there are a number of problems that must be solved in each implementation. These can be seen as tradeoffs between multiple design goals, and hence applications that use different solutions may be suitable for different purposes.

Typically, the design goals of a WYSIWYG application may include

It is not usually possible to achieve all of these goals at once.

The major problem to be overcome is that of varying output resolution. As of 2007, monitors typically have a resolution of between 92 and 125 pixels per inch. Printers generally have resolutions between 240 and 1440 pixels per inch; in some printers the horizontal resolution is different from the vertical. This becomes a problem when trying to lay out text; because older output technologies require the spacing between characters to be a whole number of pixels, rounding errors will cause the same text to require different amounts of space in different resolutions.

Solutions to this include

Other problems that have been faced in the past include printers that have a selection of fonts that are not identical to those used for on-screen display (largely solved by the use of downloadable font technologies like TrueType) and matching color profiles between different devices (mostly solved now thanks to printer drivers with good color model conversion software).

Support for WYSIWYG in modern OSs

All versions of Mac OS since Mac OS X support unconstrained glyph placement. The positioning and spacing of glyphs on-screen will exactly match printed documents unless a programmer specifically writes their program to act otherwise.

Applications for Microsoft Windows that use the Windows Presentation Foundation, included with the OS since Windows Vista, may place glyphs freely. Older Windows programs that use the Graphics Device Interface, the drawing system for all versions of Windows prior to Windows Vista are constrained by whole-pixel glyph positioning unless programmers produce custom text rendering code that calculates individual pixel colours for itself.

Many variations are used only to illustrate a point or make a joke, and have very limited real use. Some that have been proposed include