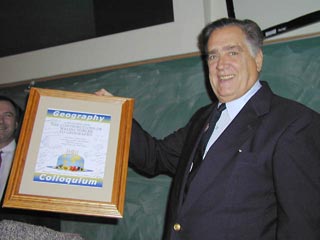 Waldo Tobler receiving a plaque for his contributions to geography. On the event of his November 2000 birthday. Photo by Susanna Baumgart, UCSB Geography

Waldo Tobler (born 1930) is an influential American-Swiss geographer and cartographer. Tobler's idea that "Everything is related to everything else, but near things are more related to each other" is referred to as the "first law of geography". Dr. Tobler is a Professor Emeritus at the University of California, Santa Barbara Department of Geography.

In 1961, Tobler received his Ph.D. in Geography from the University of Washington at Seattle. At Washington, he participated in geography's William Garrison-led quantitative revolution of the late 1950s. After graduating, Tobler spent several years at the University of Michigan. Until his retirement he held the positions of Professor of Geography and Professor of Statistics at UCSB. The University of Zurich, Switzerland, awarded him a Doctorate honoris causa in 1988.

Dr. Tobler was one of the principal investigators and a Senior Scientist in the National Science Foundation sponsored National Center for Geographic Information and Analysis. He has used computers in geographic research since the 1960s, with emphasis on mathematical modeling and graphic interpretations. Well known for his publications, he formulated the "first law of geography" in 1970 while producing a computer movie, and is the inventor of novel and unusual map projections, among which was the first derivation of the partial differential equations for area cartograms. He also invented a method for smooth two-dimensional mass-preserving areal data redistribution.

Tobler has been involved recently in building a global, latitude-longitude oriented, demographic information base with resolution two orders of magnitude better than was previously available. He also had been examining the development of smooth finite element and categorical pycnophylactic geographic information reallocation models. In July 1999 he presented a keynote speech, “The World is Shriveling as it Shrinks”, at the ESRI International User Conference, and was the recipient of a Lifetime Achievement Award in GIS by ESRI. Taylor and Francis of London recently published a map projection book, co-authored with Q. Yang of China and the late John P. Snyder. Current interests relate to ideas in computational geography including the analysis of geographical vector fields and the development of migration and of global trade models.

Tobler has also been concerned with the representing flow (due to its involvement with movement as a mechanism of geographic change). In 2003, Tobler released a freeware, Microsoft Windows-based version of his flow representation software Flow Mapper. In 2005, an ESRI ArcGIS version of the software, inspired by Tobler, was developed by Alan Glennon and Mike Goodchild at UCSB. Both versions are available from the Center for Spatially Integrated Social Science (web)