A waypoint is a reference point in physical space used for purposes of navigation.

Waypoints are sets of coordinates that identify a point in physical space. For the purposes of terrestrial navigation, these coordinates usually include longitude and latitude, and sometimes altitude (particularly for air navigation). Waypoints have only become widespread for navigational use by laypersons since the development of advanced navigational systems, such as the Global Positioning System (GPS) and certain other types of radio navigation. Waypoints located on the surface of the Earth are usually defined in two dimensions (e.g., longitude and latitude); those used in the Earth's atmosphere or in outer space are defined in at least three dimensions (four if time is one of the coordinates, as it might be for some waypoints outside the Earth).

Although the term waypoint has only come into common use in recent years, the equivalent of a waypoint in all but name has existed for as long as human beings have navigated. Waypoints have traditionally been associated with distinctive features of the real world, such as rock formations, springs, oases, mountains, buildings, roadways, waterways, railways, and so on. Today, these associations persist, but waypoints are more often associated with physical artifacts created specifically for navigation, such as radio beacons, buoys, satellites, control points, etc.

In the modern world, waypoints are increasingly abstract, often having no obvious relationship to any distinctive features of the real world. These waypoints are used to help define invisible routing paths for navigation. For example, artificial airways—“highways in the sky” created specifically for purposes of air navigation—often have no clear connection to features of the real world, and consist only of a series of abstract waypoints in the sky through which pilots navigate; these airways are designed to facilitate air traffic control and routing of traffic between heavily traveled locations, and do not reference natural terrain features. Abstract waypoints of this kind have been made practical by modern navigation technologies, such as land-based radio beacons and the satellite-based Global Positioning System (GPS).

Abstract waypoints typically have only specified longitude and latitude or UTM coordinates plus the reference datum, and often a name if they are marked on charts, and are located using a radio navigation system such as a VOR or GPS receiver. A waypoint can be a destination, a fix along a planned course used to make a journey, or simply a point of reference useful for navigation.

GPS systems are increasingly used to create and use waypoints in navigation of all kinds. A typical GPS receiver can locate a waypoint with an accuracy of three meters or better when used with land-based assisting technologies such as the Wide Area Augmentation System (WAAS). Waypoints can also be marked on a computer mapping program and uploaded to the GPS receiver, marked on the receiver's own internal map, or entered manually on the device as a pair of coordinates.

If the GPS receiver has track-logging capabilities, one can also define waypoints after the fact from where one has been. For example, marine GPS receivers often have a "man overboard" function, which instantly creates a waypoint in the receiver for the boat's position when enabled and then begins displaying the distance and course back to that position.

In GPS navigation, a "route" is usually defined as a series of two or more waypoints. To follow such a route, the GPS user navigates to the nearest waypoint, then to the next one in turn until the destination is reached. Most receivers have the ability to compute a great circle route towards a waypoint, enabling them to find the shortest route even over long distances, although waypoints are often so closely spaced that this isn't a factor.

Many GPS receivers, both military and civilian, now offer integrated cartographic databases (also known as base maps), allowing users to locate a point on a map and define it as a waypoint. Some GPS systems intended for automobile navigation can generate a suggested driving route between two waypoints, based on the cartographic database. As one drives along the route, the system indicates the driver's current location and gives advance notice of upcoming turns. The best of these systems can take into account traffic restrictions such as one-way streets and intersections where left or right turns are prohibited when computing the suggested driving route.

Most GPS receivers allow the user to assign a name to each waypoint. Many models also let the user select a symbol or icon to identify the waypoint on a graphical map display from a built-in library of icons. These include standard map symbols for marine navigation aids such as buoys, marinas and anchorages, as well as such land-based symbols as churches, bridges, shopping centers, parks, and tunnels.

One common brand of GPS device the can be used to create WayPoints is Garmin. After Waypoints have been captured the spatial information can be converted via a script[1] to a GIS point feature class for use in ArcMap.

GPS receivers used in air or marine navigation may contain large databases of standard, named waypoints that can be used to coordinate navigation with other aircraft or ships in the area. Some receivers are integrated into autopilots or flight management systems that will pilot an aircraft or ship along a planned route without human intervention. The routing information for the flight plans used in modern aviation often consists of a list of the waypoints that the flight will follow. Most waypoints used by aviation GPS receivers correlate with waypoints established on charts and other navigational documentation. 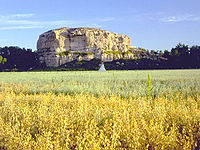 Pompey's Pillar, a historic waypoint along the Yellowstone River in Montana, USA

Although the concept of waypoints has been greatly popularized among non-specialists by the development of the GPS, waypoints can be used with other navigational aids. A notable example is the worldwide use, in orienteering sports, of waypoints with a map that omits a coordinate system (see Control point (orienteering)).

In aerial celestial navigation, waypoints are precomputed along an aircraft's great circle route to divide the flight into rhumb lines and allow celestial fixes to be more rapidly taken using the pre-computed intercept method.

In air navigation, waypoints are sometimes defined as intersections between two VOR radials, or in terms of specific distances and headings towards or away from a radio beacon. For visual air navigation (see the article on VFR), waypoints may be directly associated with distinctive features on the ground that are easily identifiable from aircraft, such as stadiums, power plants, racetracks, etc. Temporary waypoints are sometimes defined as traffic requires, e.g., air-traffic controllers may instruct a pilot to reference a terrain feature at “your ten o'clock position, two miles.”

In the RNAV context, a waypoint is a predetermined geographical position that is defined in terms of latitude/longitude coordinates (altitude is ignored). Waypoints may be a simple named point in space or may be associated with existing navigational aids, intersections, or fixes. A waypoint is most often used to indicate a change in direction, speed, or altitude along the desired path.

Establishing waypoints in real-time and transmitting them via GSM cellular telephone networks using the Short Message Service (SMS) is referred to as Gps2sms. Some vehicles and vessels are equipped with hardware that is able to automatically send an SMS text message when a particular event happens, such as theft or anchor drift. The receiving party can ring an alert sound or store the waypoint in a computer system or draw a map indicating the location. Recreational use of GPS2SMS is used by travellers who want to show their digital breadcrumbs on a map. See also automatic identification system.