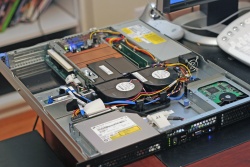 The inside and front of a Dell PowerEdge web server

The term web server or webserver can mean one of two things:

The origin of the content sent by server is known as:

Serving static content is usually much faster (from 2 to 100 times) than serving dynamic content, especially if the latter involves data pulled from a database.

Web servers are able to map the path component of a Uniform Resource Locator (URL) into:

For a static request the URL path specified by the client is relative to the Web server's root directory.

Consider the following URL as it would be requested by a client:

http://www.example.com/path/file.html The client's web browser will translate it into a connection to www.example.com with the following HTTP 1.1 request:

Host: www.example.com The web server on www.example.com will append the given path to the path of its root directory. On Unix machines, this is commonly /var/www. The result is the local file system resource:

The web server will then read the file, if it exists, and send a response to the client's web browser. The response will describe the content of the file and contain the file itself.

A web server (program) has defined load limits, because it can handle only a limited number of concurrent client connections (usually between 2 and 80,000, by default between 500 and 1,000) per IP address (and TCP port) and it can serve only a certain maximum number of requests per second depending on:

When a web server is near to or over its limits, it becomes overloaded and thus unresponsive.

A web server can be either implemented into the OS kernel, or in user space (like other regular applications).

An in-kernel web server (like TUX on Linux or Microsoft IIS on Windows) will usually work faster because, as part of the system, it can directly use all the hardware resources it needs, such as:

Web servers that run in user-mode have to ask the system the permission to use more memory or more CPU resources. Not only these requests to the kernel take time, but they are not always satisfied because the system reserves resources for its own usage and has the responsibility to share hardware resources with all the other running applications.

As a consequence, the only way for a user-mode web server to match kernel-mode performances is to raise the quality of its code to much higher standards than the code used into another web server that runs in the kernel.

This is more difficult under Windows than under Linux where the user-mode overhead is 6 times smaller than under Windows: http://www.acc.umu.se/~bosse/High%20performance%20kernel%20mode%20web%20server%20for%20Windows.pdf

At any time web servers can be overloaded because of:

The symptoms of an overloaded web server are:

To partially overcome above load limits and to prevent overload, most popular web sites use common techniques like: 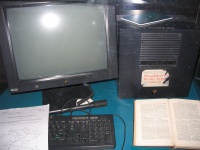 In 1989 Tim Berners-Lee proposed to his employer CERN (European Organization for Nuclear Research) a new project, which had the goal of easing the exchange of information between scientists by using a hypertext system. As a result of the implementation of this project, in 1990 Berners-Lee wrote two programs:

Between 1991 and 1994 the simplicity and effectiveness of early technologies used to surf and exchange data through the World Wide Web helped to port them to many different operating systems and spread their use among lots of different social groups of people, first in scientific organizations, then in universities and finally in industry.

In 1994 Tim Berners-Lee decided to constitute the World Wide Web Consortium to regulate the further development of the many technologies involved (HTTP, HTML, etc.) through a standardization process.

Given below is a list of top Web server software vendors published in a Netcraft survey in January 2009. 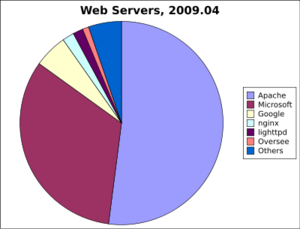