Altitude has one use on the context in which it is used (aviation, geometry, geographical survey, sport, and more). As a general definition, altitude is a distance measurement, usually in the vertical or "up" direction, between a reference datum and a point or object. The reference datum also often varies according to the context.

Vertical distance measurements in the "down" direction are commonly referred to as depth. 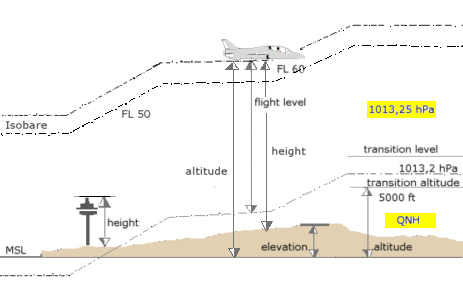 In aviation, the term altitude can have several meanings, and is always qualified by either explicitly adding a modifier (e.g. "true altitude"), or implicitly through the context of the communication. Parties exchanging altitude information must be clear which definition is being used. Air Navigation

Aviation altitude is measured using either Mean Sea Level (MSL) or local ground level (Above Ground Level, or AGL) as the reference datum.

With the exception of a few countries whose aviation authorities use metres (e.g. Russia), altitudes are stated in feet.

Pressure altitude divided by 100 feet is referred to as the flight level, and is used above the transition altitude (18,000 feet in the US, but may be as low as 3,000 feet in other jurisdictions); so when the altimeter reads 18,000 ft on the standard pressure setting the aircraft is said to be at "Flight level 180". When flying at a Flight Level, the altimeter is always set to standard pressure (29.92 / 1013.25).

On the flight deck, the definitive instrument for measuring altitude is the pressure altimeter, which is an aneroid barometer with a front face indicating distance (feet or meters) instead of atmospheric pressure.

There are several types of aviation altitude:

These types of altitude can be explained more simply as various ways of measuring the altitude:

Although the term altitude is commonly used to mean the height above sea level of a location, in Geography the term Elevation is often preferred for this usage.

The Earth's atmosphere is divided into several altitude regions:[4]