In the study of ellipses and related geometry, various parameters in the distortion of a circle into an ellipse are identified and employed: Aspect ratio, flattening and eccentricity. All of these parameters are ultimately trigonometric functions of the ellipse's modular angle, or angular eccentricity.

With the basic right triangle, the two sides adjoining the 90° angle (here, "

") are the triangle's "legs" and the third, longest, opposite side (" 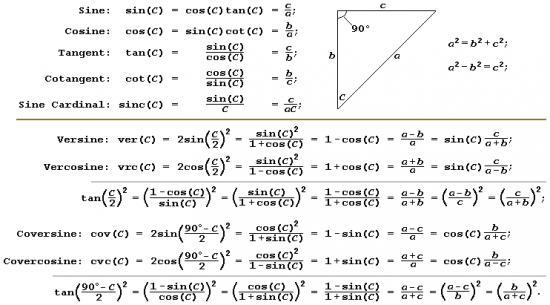 The doubled and squared half-angle functions (or "versed", meaning "turned", here, through 90°)—versine, vercosine, coversine and covercosine—have fallen into general obscurity, with function designation and abbreviation becoming ambiguous and even interchangeable (e.g., coversine is termed in some references as "vercosine" and "ver(C)" is also denoted as "vers(C)" and "versin(C)", while "cov(C)" is sometimes denoted as either "cvs(C)" or more commonly, "coversin(C)"). Also,

is separately identified as "haversine" and

as "hacoversine" (extending that terminology,

can be regarded as "havertangent").

The parameters of an ellipse involve the same components and behave the same way as any right triangle, with one major exception: Physically speaking, there is no hypotenuse, only two "legs"—the semi-major, or transverse, and semi-minor, or conjugate, axes, or (as applied to a sphere or ellipsoid) the equatorial (or transverse) and polar (or conjugate) radii,

. Instead, an equivalent right triangle is created and defined, where

is the leg adjoining

and the complementary, imaginary "leg" is the half-focal separation, or linear eccentricity,

This "imaginary leg" equals the distance from the center of the ellipse to the focus:

The generally accepted symbol for angular eccentricity is the Greek letter alpha,

[1].
However, not only is it more universally recognized as the denotation for navigational azimuth, but

is also nearly identical, glyphically, to italic a,

, which is used to denote the major radius of an ellipse which, in turn, is used in the different calculations of

.
Besides italic a, it is also glyphically a look-alike to the ancient Greek double character ("diphthong") omicron iota,

.
Over time, an alternative to the Latin form of

. In even more recent times, like its cousin ae, in most cases oe has simplified to just "e" (e.g., "oeconomy" → "economy"),[2] which is the Latin form of the Greek letter (var)epsilon, ε, the symbol for eccentricity.
Given this background, an alternative notation for angular eccentricity is used here, based on the graphenic derivation of e from

is Greek ethel, or "grethel".
The LaTex source code for this ligature is "o\!\varepsilon" (or, if——like "e" for ε——just "œ" is used, "o\!e").
There is also a more conceptual glyphical basis for

, as "o" can be regarded as a circle, with eccentricity, ε, pressing into it, making it elliptical:

can be found via the inverse of any trigonometric function it is the argument of:

There are three primary parameters used in defining and constructing an elliptic figure: Circularity, eccentricity and flattening.

The most concrete, tangible characteristic of an ellipse is its circularity, or diametric ratio, d. Also known as the aspect ratio, the circularity is the ratio of the conjugate to transverse radii, which equals the ellipse's angular eccentricity cosine:

It is this defining measurement that is visually discernible. For example, if the circularity of an ellipse is .5, then the (central) vertical diameter is one-half that of the horizontal, if .1, then one-tenth, if .01, then one-hundredth, etc. The extremes and middle valued ellipses work out to the following: 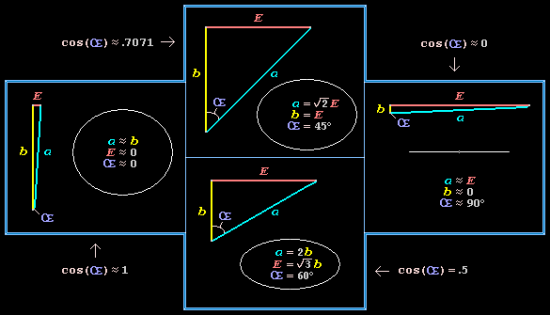 The eccentricity is actually a trio of factors: The primary, or first, eccentricity, ε (for basic text notation, "ε" is commonly expressed as "e"), is

's sine, the second eccentricity, ε', is its tangent, and the third, ε" (also denoted in its squared form as m), is (in terms of function identity) ambiguous:

Since they are mostly used in that form anyway, the eccentricities are usually found and kept in their squared form.
The primary eccentricity could be regarded as the complementary circularity, as it is the ratio of the linear eccentricity to the semi-major axis:

The flattening, or ellipticity, in contrast, is self-explanatory, as it defines the degree of "squashing", from no flattening (a perfect circle) to complete flattening (a straight line). Just as the eccentricity is based on

's sine, the flattening is based on its versine. Also like the eccentricity, there are three forms of flattening—the primary, or first, flattening, f, which is

's versine, a second, f' (rarely used or even acknowledged), and a third, f'' (more commonly denoted as n), which is

's "havertangent"[3]. The symmetry of the flattenings is similar in nature to the eccentricities, with the differences being that the radii aren't squared and the sines are doubled with half-angles:

While the circularity would seem to be the ideal parameter to find an unknown axis (usually b), it is usually the inverse (primary) flattening that is provided:

The basic object of elliptic geometry is the circle. If the two dimensional circle is expanded into a three dimensional solid, it becomes a sphere. Likewise, if one expands a two dimensional ellipse into a three dimensional solid, it becomes an ellipsoid. If the ellipse is rotated about its polar axis, it is known as an ellipsoid of revolution, specifically an oblate spheroid, or oblatum, where a > b—like an ellipse. If it is rotated about its equatorial axis, it is a prolate spheroid, or prolatum. 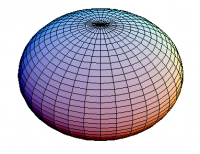 In dealing with elliptic parameters, the main, oblate-prolate contrasting characteristic is the radius catagorization.

Due to their rotation, most of the planets (including Earth) and their satellites are (even if minimally) oblate spheroids. As such, planetodetic formulation utilizes the oblate format, which follows standard elliptic parameterization.

In all cases of eccentricity and flattening, the numerator is always the major minus the minor radii, while the denominators of the eccentricities and third flattening are also fixed as to the major-minor status, but the first and second flattenings of prolate valuations are fixed to the conjugate-transverse status [4](thus their

For the most part, elliptic formularies ignore the angular eccentricity for the more familiar and notationally concise ε2, ε' 2, and f. However, these parameters don't provide the clear and obvious transformational relationships and structure. Consider the basic elliptic integrand at point P: 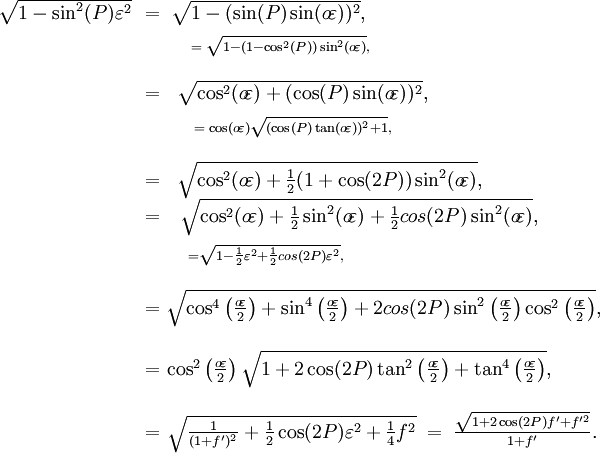 While one may consider such ability to convert as just gratuitously frivolous, there is at least one valid reason, as the Binomial series expansion (which planetodetic formularies frequently use) for

converges a lot quicker than the one for

which, in turn, converges quicker than

, there are likely other, even more efficient, series expansions possible (if not even efficiently practical approximations to a general transcendental elliptic integral).
Another example is the equation for authalic surface area:

While one certainly can use ε to define and express this type of equation, using

frequently provides a more illustrative—if not even its definitively mathematical—origin.