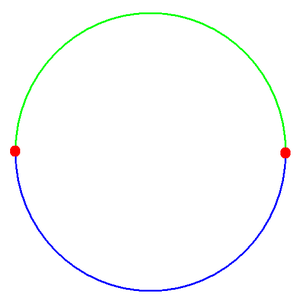 Antipodal points on a circle are 180 degrees apart.
For the geographical antipodal point of a place on the Earth, see antipodes.
Polar opposite redirects here. For the song "Polar Opposites" by Modest Mouse, see The Lonesome Crowded West.

In mathematics, the antipodal point of a point on the surface of a sphere is the point which is diametrically opposite it — so situated that a line drawn from the one to the other passes through the centre of the sphere and forms a true diameter.

This term applies to opposite points on a circle or any n-sphere.

An antipodal point is sometimes called an antipode, a back-formation from the Greek loan word antipodes, which originally meant "opposite the feet."

In mathematics, the concept of antipodal points is generalized to spheres of any dimension: two points on the sphere are antipodal if they are opposite through the centre; for example, taking the centre as origin, they are points with related vectors v and −v. On a circle, such points are also called diametrically opposite. In other words, each line through the centre intersects the sphere in two points, one for each ray out from the centre, and these two points are antipodal.

The Borsuk-Ulam theorem is a result from algebraic topology dealing with such pairs of points. It says that any continuous function from Sn to Rn maps some pair of antipodal points in Sn to the same point in Rn. Here, Sn denotes the n-dimensional sphere in (n + 1)-dimensional space (so the "ordinary" sphere is S2 and a circle is S1).

The antipodal map A : Sn → Sn, defined by A(x) = −x, sends every point on the sphere to its antipodal point. It is homotopic to the identity map if n is odd, and its degree is (−1)n+1.

If one wants to consider antipodal points as identified, one passes to projective space (see also projective Hilbert space, for this idea as applied in quantum mechanics).