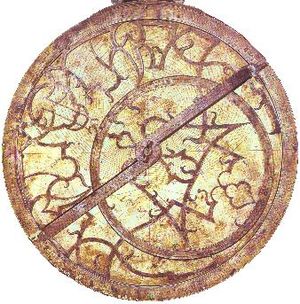 A 16th century astrolabe, showing a tulip rete and rule.

An astrolabe[1] is a historical astronomical instrument used by classical astronomers, navigators, and astrologers. Its many uses include locating and predicting the positions of the Sun, Moon, planets, and stars; determining local time given local latitude and vice-versa; surveying; and triangulation. 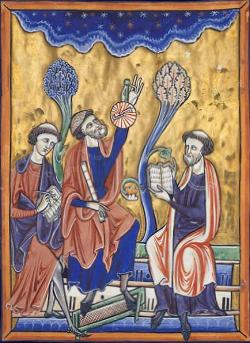 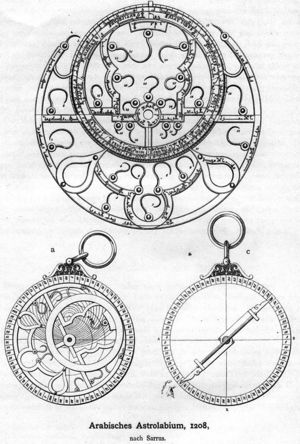 A Persian astrolabe from 1208 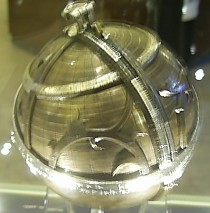 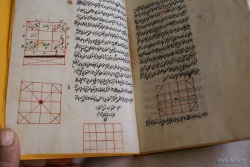 A Treatise on the astrolabe by Nasir al-Din al-Tusi, Isfahan 1505

An early rudimentary astrolabe was invented in the Hellenistic world by around 200 BC and is often attributed to Hipparchus. A marriage of the planisphere and dioptra, the astrolabe was effectively an analog calculator capable of working out several different kinds of problems in spherical astronomy. Theon of Alexandria wrote a detailed treatise on the astrolabe, and argues that Ptolemy used an astrolabe to make the astronomical observations recorded in the Tetrabiblos.[2]

Astrolabes continued in use in the Greek-speaking world throughout the Byzantine period. About 540 AD the Christian philosopher John Philoponus wrote a treatise on the astrolabe in Greek, which is the earliest extant Greek treatise on the instrument. [3] In addition, Severus Sebokht also wrote a treatise on the astrolabe in Syriac in the mid-seventh century.[4] It was undoubtedly from such Eastern Christian scholars, either Greek or Syriac-speakers, that Muslim scholars were first introduced to the astrolabe, just as they were introduced by such Eastern Christians to other Greek scientific instruments and texts (including other works by Philoponus). Severus Sebokht refers in the introduction of his treatise to the astrolabe as being made of brass, indicating that metal astrolabes were known in the Christan East well before they were developed in the Islamic world or the Latin West. [5]

Astrolabes were also used in the medieval Islamic world, chiefly as an aid to navigation and as a way of finding the qibla, the direction of Mecca. The first person credited with building the astrolabe in the Islamic world is reportedly the eighth century mathematician, Muhammad al-Fazari.[6] The mathematical background was established by the Arab astronomer, Muhammad ibn Jĝbir al-Harrĝnī al-Battĝnī (Albatenius), in his treatise Kitab az-Zij (ca. 920 AD), which was translated into Latin by Plato Tiburtinus (De Motu Stellarum). The earliest surviving astrolabe is dated AH 315 (927/8 AD). In the Islamic world, astrolabes were used to find the times of sunrise and the rising of fixed stars, to help schedule morning prayers (salat). In the 10th century, al-Sufi first described over 1,000 different uses of an astrolabe, in areas as diverse as astronomy, astrology, horoscopes, navigation, surveying, timekeeping, prayer, Salah, Qibla, etc.[7]

Abū Ishĝq Ibrĝhīm al-Zarqĝlī (Arzachel) of Al-Andalus constructed the first universal astrolabe instrument which, unlike its predecessors, did not depend on the latitude of the observer, and could be used from anywhere on the Earth. This instrument became known in Europe as the "Saphaea". The astrolabe was introduced to other parts of Western Europe via Al-Andalus in the 11th century.[8]

The spherical astrolabe, a variation of both the astrolabe and the armillary sphere, was invented during the Middle Ages by astronomers and inventors in the Islamic world.[9] The earliest description of the spherical astrolabe dates back to Al-Nayrizi (fl. 892-902). In the 12th century, Sharaf al-Dīn al-Tūsī invented the linear astrolabe, sometimes called the "staff of al-Tusi", which was "a simple wooden rod with graduated markings but without sights. It was furnished with a plumb line and a double chord for making angular measurements and bore a perforated pointer."[10] The first geared mechanical astrolabe was later invented by Abi Bakr of Isfahan in 1235.[11]

Peter of Maricourt in the last half of the thirteenth century also wrote a treatise on the construction and use of a universal astrolabe (Nova compositio astrolabii particularis). However, given the complicated nature of the instrument, it is highly unlikely that any were actually constructed; at least none survive.

The English author Geoffrey Chaucer (ca. 1343–1400) compiled a treatise on the astrolabe for his son, mainly based on Messahalla. The same source was translated by the French astronomer and astrologer Pelerin de Prusse and others. The first printed book on the astrolabe was Composition and Use of Astrolabe by Cristannus de Prachaticz, also using Messahalla, but relatively original.

In 1370, the first Indian treatise on the astrolabe was written by the Jain astronomer Mahendra Suri.[12]

The first known metal astrolabe known in Western Europe was developed in the fifteenth century by Rabbi Abraham Zacuto in Lisbon. Metal astrolabes improved on the accuracy of their wooden precursors. In the fifteenth century, the French instrument-maker Jean Fusoris (ca. 1365–1436) also started selling astrolabes in his shop in Paris, along with portable sundials and other popular scientific gadgets of the day.

In the 16th century, Johannes Stöffler published Elucidatio fabricae ususque astrolabii, a manual of the construction and use of the astrolabe. Four identical 16th century astrolabes made by Georg Hartmann provide some of the earliest evidence for batch production by division of labor.

At first mechanical astronomical clocks were influenced by the astrolabe; in many ways they could be seen as clockwork astrolabes designed to produce a continual display of the current position of the sun, stars, and planets. Ibn al-Shatir constructed the earliest astrolabic clock in the early 14th century.[13] At around the same time, Richard of Wallingford's clock (c. 1330) consisted essentially of a star map rotating behind a fixed rete, similar to that of an astrolabe.[14]

Many astronomical clocks, such as the famous clock at Prague, use an astrolabe-style display, adopting a stereographic projection (see below) of the ecliptic plane. 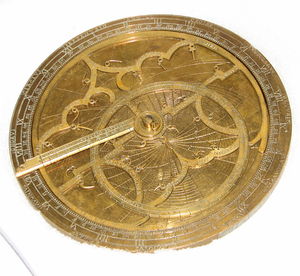 The Hartmann astrolabe in Yale's collection. This beautiful instrument shows its rete and rule. 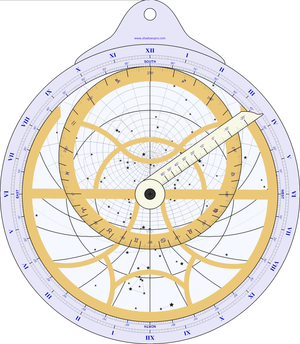 An astrolabe consists of a hollow disk, called the mater (mother), which is deep enough to hold one or more flat plates called tympans, or climates. A tympan is made for a specific latitude and is engraved with a stereographic projection of circular lines of equal azimuth and altitude representing the portion of the celestial sphere which is above the local horizon. The rim of the mater is typically graduated into hours of time, or degrees of arc, or both. Above the mater and tympan, the rete, a framework bearing a projection of the ecliptic plane and several pointers indicating the positions of the brightest stars, is free to rotate. Some astrolabes have a narrow rule or label which rotates over the rete, and may be marked with a scale of declinations.

The rete, representing the sky, has the function of a star chart. When it is rotated, the stars and the ecliptic move over the projection of the coordinates on the tympan. A complete rotation represents the passage of one day. The astrolabe is therefore a predecessor of the modern planisphere.

On the back of the mater there will often be engraved a number of scales which are useful in the astrolabe's various applications; these will vary from designer to designer, but might include curves for time conversions, a calendar for converting the day of the month to the sun's position on the ecliptic, trigonometric scales, and a graduation of 360 degrees around the back edge. The alidade is attached to the back face. An alidade can be seen in the lower right illustration of the Persion astrolabe above. When the astrolabe is held vertically, the alidade can be rotated and a star sighted along its length, so that the star's altitude in degrees can be read ("taken") from the graduated edge of the astrolabe; hence the word's Greek roots: "astron" (ἄστϝον) = star + "lab-" (λαβ-) = to take.