Users can browse and search topographically-shaded street maps for many cities worldwide. Maps include certain points of interest built-in, such as metro stations, stadiums, hospitals, and other facilities. It is also possible to browse public user-created points of interest. Search can cover public collections, businesses or types of business, locations, or people.

For some countries, like South Africa, and South Korea, Bing Maps has data on highways and some arterial roads, but lacks local streets or alleys. There is also detailed map data available for several global cities in developing countries like Rio de Janeiro, Istanbul, and Mexico City. However, for such cities, the detail of the map decreases significantly as one moves outward from the city center.

Bing Maps also includes several terabytes of satellite and aerial imagery. In many areas, maximum resolution is approximately 4.5 pixels per meter. Elsewhere, especially in the most remote areas of the world, top resolution is a few orders of magnitude less. Users may toggle labels on or off, choosing whether to see the ground as it would appear from an airplane versus closer to how it would appear on a map. 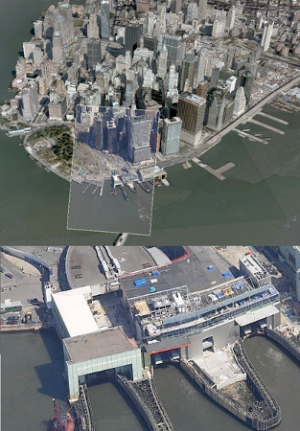 In over 100 cities in the United States,[7] Canada, Japan and in over 80 European locations,[8] a bird's-eye view offers aerial photos from four angles. These Pictometry images are much more detailed than the aerial views from directly above buildings. Signs, advertisements, pedestrians, and other objects are clearly visible in many bird's eye views.

The 3D Maps feature lets user see buildings in 3D, with the added ability to rotate and tilt the angle in addition to panning and zooming. To attempt to achieve near-photorealism, all 3D buildings are textured using composites of aerial photography.

To view the 3D maps, users must install a plug-in, then enable the "3D" option on "Virtual Earth". In addition to exploring the maps using a mouse and keyboard, it is possible to navigate the 3D environment using an Xbox 360 controller or another game controller in Windows Vista or Windows XP. As of April 2007, users may also use 3Dconnexion's SpaceNavigator input device.

Currently, roughly 68 cities worldwide may be viewed in 3D, including most of the major cities in the United States and a few cities in Canada, the United Kingdom, and France.[9] Some additional cities have had a select few important landmarks modelled in 3D, such as the Colosseum in Rome. Terrain data is available for the entire world. It is also possible to use a simple 3D modelling program called Virtual Earth - 3DVIA to add one's own models to the 3D map.

The following is a partial list of cities that have most areas rendered in 3D:

Microsoft announced in March 2008 that it will be releasing its latest software technology called “ClearFlow”. It is a Web-based service for driving directions available on Live.com in 72 cities across the U.S.[10] The tool took five years for Microsoft’s Artificial Intelligence team to develop. ClearFlow provides real-time traffic data to help drivers avoid traffic congestion. Differing from Yahoo! Maps, Google Maps and MapQuest, ClearFlow not only gives information for alternative routes, but supplies traffic conditions on city streets adjacent to highways.[11] Clearflow anticipates traffic patterns, while taking into account sporting/arena events, time of day and weather conditions, and then reflects the back ups and their consequential spill over onto city streets. Often, ClearFlow found it may be faster to stay on the highway instead of seeking alternative side street routes, which involve traffic lights and congestion as well.[12]

According to U.S Microsoft employee and artificial intelligence expert, Eric Horvitz, “…ClearFlow would be integrated into Bing Mobile and other Microsoft mobile applications, including in-car navigation and personal navigation devices.”[13] Clearflow will be available at no cost. The one draw back of Clearflow is that it offers no real-time updates regarding highway and road closures or accidents.[14] 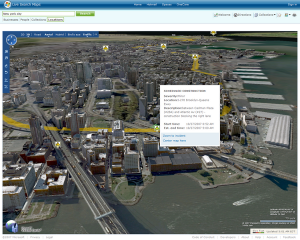 Bing Maps showing where there is traffic and relevant details

Bing Maps was based on existing Microsoft technologies such as Microsoft MapPoint, and TerraServer. The original version lacked many of its now-distinguishing features, including birds' eye view and 3D maps, and the Collections functionality was limited to a single "Scratchpad" of points of interest. Upon its release in December 2005, Windows Live Local became the public face of the Virtual Earth platform. On November 6, 2006, Microsoft added the ability to view the maps in 3D using a .NET managed control and managed interfaces to Direct3D. Microsoft subsequently referred to this product officially as "Live Search Maps", integrating it as part of its Live Search services. On June 3, 2009, Microsoft officially rebranded Live Search Maps as Bing Maps, and the Virtual Earth platform as Bing Maps for Enterprise.

Early in 2008, following criticism that the similar program Google Earth may be used as a reconnaissance platform by terrorists, Microsoft began a program of deleting high definition aerial views of military bases and other similar installations from Bing Maps.[15]

One example of such a deletion can be witnessed by viewing the Aviano Air Base in Northern Italy.[1] Whilst the base is viewable in low resolution from a low zoom level, zooming in reveals only farmland. It is unclear what location the photographs actually depict. Another example is the naval base in Toulon, France, which was blanked out in white. Also, while trying to view government buildings in Washington D.C. such as the White House, the image becomes extremely pixelated within the property lines. Area 51 can only be seen in a low resolution, Zooming in on the property will come up with no picture.

From 11 April to 15 April 2008, users in the UK who navigated to http://maps.live.com/ were automatically redirected to Multimap.com, making it very difficult to access Live Search Maps.[16] The issue was due to what the Bing Maps team called "a couple of unfortunate bugs."[17]

Bing maps frequently update their aerial imagery, on roughly a monthly basis. Each imagery release typically contains more than 10TB of imagery. The latest imagery releases can be seen on the Silverlight powered Bing World Tour application launched in June 2009.

Microsoft states that Bing Maps can be used with Internet Explorer 5.5 and later, with Mozilla Firefox 1.5 on Windows and Mac OS X, and with Safari[18]. Firefox on Linux and Firefox 2.0 and 3.0 also appear to work. Opera is stated to be usable "with some functionality limitations."[19]

There are multiple site based on region exits for bing maps. One can change the region on Bing Maps site on top right corner to go to region specific map site.