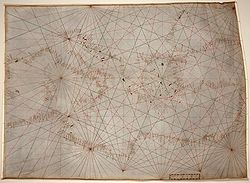 The oldest original cartographic artifact in the Library of Congress: a nautical chart of the Mediterranean Sea. Second quarter of the fourteenth century.

Cartography (in Greek chartis = map and graphein = write) is the study and practice of making geographical maps. Combining science, aesthetics, and technique, cartography builds on the premise that reality can be modeled in ways that communicate spatial information effectively.

The fundamental problems of cartography are to:[citation needed] 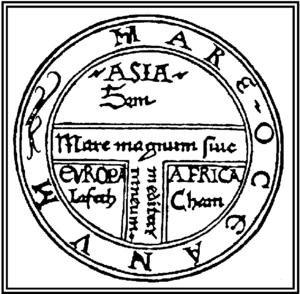 The earliest known map is a matter of some debate, both because the definition of "map" is not sharp and because some artifacts speculated to be maps might actually be something else. A wall painting, which may depict the ancient Anatolian city of Çatalhöyük (previously known as Catal Huyuk or Çatal Hüyük), has been dated to the late 7th millennium BCE.[1][2] Other known maps of the ancient world include the Minoan “House of the Admiral” wall painting from c. 1600 BCE, showing a seaside community in an oblique perspective and an engraved map of the holy Babylonian city of Nippur, from the Kassite period (14th – 12th centuries BCE).[3]

The ancient Greeks and Romans created maps, beginning at latest with Anaximander in the 6th century BC.[4] In the 2nd century AD, Ptolemy produced his treatise on cartography, Geographia. [5] This contained Ptolemy's world map - the world then known to Western society (Ecumene). As early as the 700s, Arab scholars were translating the works of the Greek geographers into Arabic.[citation needed]

In ancient China, geographical literature spans back to the 5th century BC. The oldest extant Chinese maps come from the State of Qin, dated back to the 4th century BC, during the Warring States Period. In the book of the Xin Yi Xiang Fa Yao, published in 1092 by the Chinese scientist Su Song, a star map on the equidistant cylindrical projection.[6][7] Although this method of charting seems to have existed in China even prior to this publication and scientist, the greatest significance of the star maps by Su Song, is that they represent the oldest existent star maps in printed form.

Early forms of cartography of India included legendary paintings; maps of locations described in Indian epic poetry, for example, the Ramayana.[8] Indian cartographic traditions also covered the locations of the Pole star, and other constellations of use.[8] These charts may have been in use by the beginning of the Common Era for purposes of navigation.[8]

Mappa mundi is the general term used to describe Medieval European maps of the world. Approximately 1,100 mappae mundi are known to have survived from the Middle Ages. Of these, some 900 are found illustrating manuscripts and the remainder exist as stand-alone documents (Woodward, p. 286).

The Tabula Rogeriana, drawn by Muhammad al-Idrisi for Roger II of Sicily in 1154.

The Arab geographer, Muhammad al-Idrisi, produced his medieval atlas Tabula Rogeriana in 1154. He incorporated the knowledge of Africa, the Indian Ocean and the Far East, gathered by Arab merchants and explorers with the information inherited from the classical geographers to create the most accurate map of the world up until his time. It remained the most accurate world map for the next three centuries.[9]

In the Age of Exploration, from the 15th century to the 17th century, European cartographers both copied earlier maps (some of which had been passed down for centuries) and drew their own based on explorers' observations and new surveying techniques. The invention of the magnetic compass, telescope and sextant enabled increasing accuracy. In 1492, Martin Behaim, a German cartographer, made the oldest extant globe of the Earth.[10]

Due to the sheer physical difficulties inherent in cartography, map-makers frequently lifted material from earlier works without giving credit to the original cartographer. For example, one of the most famous early maps of North America is unofficially known as the "Beaver Map", published in 1715 by Herman Moll. This map is an exact reproduction of a 1698 work by Nicolas de Fer. De Fer in turn had copied images that were first printed in books by Louis Hennepin, published in 1697, and François Du Creux, in 1664. By the 1700s, map-makers started to give credit to the original engraver by printing the phrase "After [the original cartographer]" on the work.[11] 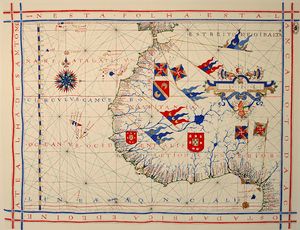 A pre-Mercator nautical chart of 1571, from Portuguese cartographer Fernão Vaz Dourado (c. 1520-c.1580). It belongs to the so-called plane chart model, where observed latitudes and magnetic directions are plotted directly into the plane, with a constant scale, as if the Earth were plane (Portuguese National Archives of Torre do Tombo, Lisbon).

In cartography, technology has continually changed in order to meet the demands of new generations of mapmakers and map users. The first maps were manually constructed with brushes and parchment; therefore, varied in quality and were limited in distribution. The advent of magnetic devices, such as the compass and much later, magnetic storage devices, allowed for the creation of far more accurate maps and the ability to store and manipulate them digitally.

Advances in mechanical devices such as the printing press, quadrant and vernier, allowed for the mass production of maps and the ability to make accurate reproductions from more accurate data. Optical technology, such as the telescope, sextant and other devices that use telescopes, allowed for accurate surveying of land and the ability of mapmakers and navigators to find their latitude by measuring angles to the North Star at night or the sun at noon.

Advances in photochemical technology, such as the lithographic and photochemical processes, have allowed for the creation of maps that have fine details, do not distort in shape and resist moisture and wear. This also eliminated the need for engraving, which further shortened the time it takes to make and reproduce maps.

Advances in electronic technology in the 20th century ushered in another revolution in cartography. Ready availability of computers and peripherals such as monitors, plotters, printers, scanners (remote and document) and analytic stereo plotters, along with computer programs for visualization, image processing, spatial analysis, and database management, have democratized and greatly expanded the making of maps. The ability to superimpose spatially located variables onto existing maps created new uses for maps and new industries to explore and exploit these potentials. See also: digital raster graphic.

These days most commercial-quality maps are made using software that falls into one of three main types: CAD, GIS and specialized illustration software. Spatial information can be stored in a database, from which it can be extracted on demand. These tools lead to increasingly dynamic, interactive maps that can be manipulated digitally. 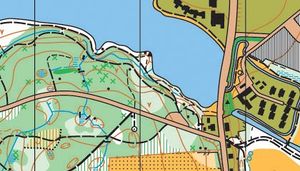 Small section of an orienteering map. 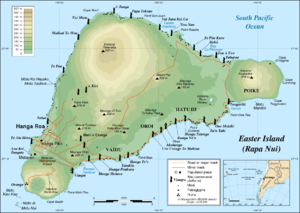 The processes of cartography depend largely on the purpose of the map. The myriad purposes of maps can be grouped into two broad categories: reference maps and thematic maps. Reference maps have the primary purpose of depicting the features of the physical and human landscape (such as roads, water, topography, vegetation, cadaster, and buildings) in their proper location, to scale. This information can be used for a wide variety of purposes by a wide variety of readers; thus, reference maps are also called general purpose maps. The prime examples of reference maps are the topographic map series produced by most national governments, including the United States Geological Survey (USGS) and the British Ordnance Survey.

A Thematic map focuses on a specific geographic theme, oriented toward a specific audience. Examples include a dot map showing corn production in Indiana or a shaded area map of Ohio counties, divided into numerical choropleth classes. As the volume of geographic data has exploded over the last century, thematic cartography has become increasingly useful and necessary to interpret and present spatial, cultural and social data.

Cartographers may go to great lengths to visualize the topic of interest in thematic maps, sometimes to the point of distorting spatial relationships. For example, topological or schematic maps distort scale and location to emphasize topological or qualitative spatial relationships; the iconic example is the transit map, starting with Beck's London Underground map. Though the most widely used map of "The Tube," it preserves little of reality. It varies scale constantly and abruptly, it straightens curved tracks, and it contorts directions haphazardly. The only traits the map preserves are the order of the stations and crossings along the tracks and whether a station or crossing is north or south of the River Thames. Yet those are all a typical passenger wishes to know, so the map fulfills its purpose.[12] Another example is the cartogram, which distorts the size of regions according to a statistical variable, effectively visualizing relative values at the expense of locational accuracy. 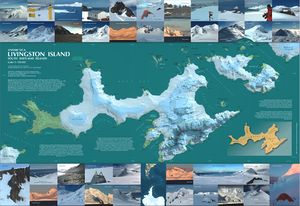 Map design is an important aspect of cartography that deals with the composition of the map's layout and visual aesthetics. The design of a map decides what appears on a map, and how it is presented. This can include a title, a legend, scale bar, color schemes, labeling, inset maps, and other information pertinent to the map's target audience.

See Maps for more links to modern and historical maps; however, most of the largest sites are listed at the sites linked below.