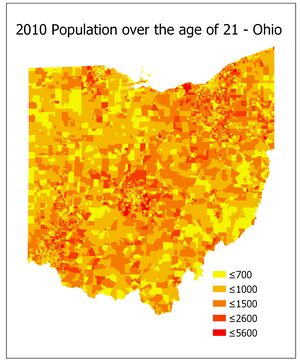 An example of a choropleth map made from Census Data

The focal point of the United States Census Bureau is geography. Their main goals are to "providing the framework for survey design, sample selection, data collection, tabulation, and dissemination." [1] Since the 1800s, the Census Bureau has played an important role in the creation and production of American cartography. In 1854 the Census Bureau published James D.B. DeBow's map along side census results however it was not until the early 20th/late 19th century that maps were produced regularly by the Census Bureau. In the mid-20th century the computer revolution made it possible and economical to develop and publish maps and there was a renewed interest in the development and publication of maps.[2]

How the data is collected

The several different types of data collected are as follows:

The data provided by the census is helpful to show maps to the public. These maps are often displayed as choropleth maps represented at the county or state levels. Data can be represented on with nominal, ordinal, or ratio data.

The Census Bureau uses a variety of geographic codes to describe and differentiate between different geographic landscapes and features.