Cluster analysis or clustering is the Classification of a set of observations into subsets (called clusters) so that observations in the same cluster are similar in some sense. Clustering is a method of unsupervised learning, and a common technique for statistical data analysis used in many fields, including machine learning, data mining, pattern recognition, image analysis and bioinformatics.

Besides the term clustering, there are a number of terms with similar meanings, including automatic classification, numerical taxonomy, botryology and typological analysis.

As a form of Classification, cluster analysis aims to form a set of classes, so that each is as similar as possible within the class, and as different as possible between classes. This is therefore an optimization problem, which is in most cases computationally difficult, with no straightforward way to find the globally optimal set of classes. Several algorithms have been developed to search for a good solution in reasonable time.

Cluster analysis can be used to cluster individuals that are close in geographic space, it is more frequently determines similarity based on similarity in one or more attributes. These attributes can be conceptualized as a multidimensional attribute space, in which similarity or difference can be determined using normal spatial distance measures.

Partitional algorithms typically determine all clusters at once, but can also be used as divisive algorithms in the hierarchical clustering.

Density-based clustering algorithms are devised to discover arbitrary-shaped clusters. In this approach, a cluster is regarded as a region in which the density of data objects exceeds a threshold. DBSCAN and OPTICS are two typical algorithms of this kind.

Another important distinction is whether the clustering uses symmetric or asymmetric distances. A property of Euclidean space is that distances are symmetric (the distance from object A to B is the same as the distance from B to A). In other applications (e.g., sequence-alignment methods, see Prinzie & Van den Poel (2006)), this is not the case.

Many clustering algorithms require specification of the number of clusters to produce in the input data set, prior to execution of the algorithm. Barring knowledge of the proper value beforehand, the appropriate value must be determined, a problem for which a number of techniques have been developed.

Hierarchical clustering creates a hierarchy of clusters which may be represented in a tree structure called a dendrogram. The root of the tree consists of a single cluster containing all observations, and the leaves correspond to individual observations.

Any valid metric may be used as a measure of similarity between pairs of observations. The choice of which clusters to merge or split is determined by a linkage criteria, which is a function of the pairwise distances between observations.

For example, suppose this data is to be clustered, and the euclidean distance is the distance metric. 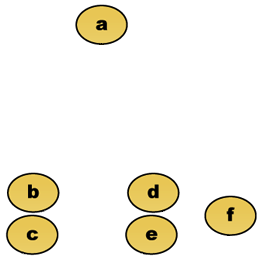 The hierarchical clustering dendrogram would be as such: 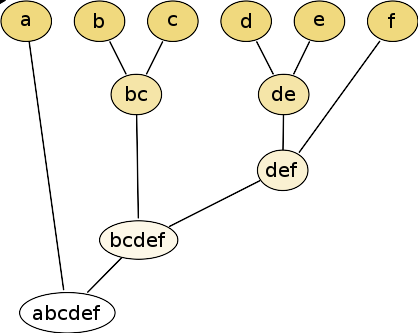 This method builds the hierarchy from the individual elements by progressively merging clusters. In our example, we have six elements {a} {b} {c} {d} {e} and {f}. The first step is to determine which elements to merge in a cluster. Usually, we want to take the two closest elements, according to the chosen distance.

Optionally, one can also construct a distance matrix at this stage, where the number in the i-th row j-th column is the distance between the i-th and j-th elements. Then, as clustering progresses, rows and columns are merged as the clusters are merged and the distances updated. This is a common way to implement this type of clustering, and has the benefit of caching distances between clusters. A simple agglomerative clustering algorithm is described in the single-linkage clustering page; it can easily be adapted to different types of linkage (see below).

is one of the following:

Each agglomeration occurs at a greater distance between clusters than the previous agglomeration, and one can decide to stop clustering either when the clusters are too far apart to be merged (distance criterion) or when there is a sufficiently small number of clusters (number criterion).

Another variation of the agglomerative clustering approach is conceptual clustering.

Example: The data set has three dimensions and the cluster has two points:

. Then the centroid Z becomes

The algorithm steps are [1]:

The main advantages of this algorithm are its simplicity and speed which allows it to run on large datasets. Its disadvantage is that it does not yield the same result with each run, since the resulting clusters depend on the initial random assignments. It minimizes intra-cluster variance, but does not ensure that the result has a global minimum of variance. Another disadvantage is the requirement for the concept of a mean to be definable which is not always the case. For such datasets the k-medoids variant is appropriate.

In fuzzy clustering, each point has a degree of belonging to clusters, as in fuzzy logic, rather than belonging completely to just one cluster. Thus, points on the edge of a cluster, may be in the cluster to a lesser degree than points in the center of cluster. For each point x we have a coefficient giving the degree of being in the kth cluster uk(k). Usually, the sum of those coefficients for any given x is defined to be 1:

With fuzzy c-means, the centroid of a cluster is the mean of all points, weighted by their degree of belonging to the cluster:

The degree of belonging is related to the inverse of the distance to the cluster center:

then the coefficients are normalized and fuzzyfied with a real parameter m > 1 so that their sum is 1. So

For m equal to 2, this is equivalent to normalising the coefficient linearly to make their sum 1. When m is close to 1, then cluster center closest to the point is given much more weight than the others, and the algorithm is similar to k-means.

The algorithm minimizes intra-cluster variance as well, but has the same problems as k-means, the minimum is a local minimum, and the results depend on the initial choice of weights. The expectation-maximization algorithm is a more statistically formalized method which includes some of these ideas: partial membership in classes. It has better convergence properties and is in general preferred to fuzzy-c-means.

QT (quality threshold) clustering (Heyer, Kruglyak, Yooseph, 1999) is an alternative method of partitioning data, invented for gene clustering. It requires more computing power than k-means, but does not require specifying the number of clusters a priori, and always returns the same result when run several times.

The distance between a point and a group of points is computed using complete linkage, i.e. as the maximum distance from the point to any member of the group (see the "Agglomerative hierarchical clustering" section about distance between clusters).

Locality-sensitive hashing can be used for clustering. Feature space vectors are sets, and the metric used is the Jaccard distance. The feature space can be considered high-dimensional. The min-wise independent permutations LSH scheme (sometimes MinHash) is then used to put similar items into buckets. With just one set of hashing methods, there are only clusters of very similar elements. By seeding the hash functions several times (eg 20), it is possible to get bigger clusters. [3]

Given a set of data points A, the similarity matrix may be defined as a matrix

represents a measure of the similarity between points

. Spectral clustering techniques make use of the spectrum of the similarity matrix of the data to perform dimensionality reduction for clustering in fewer dimensions.

One such technique is the Shi-Malik algorithm, commonly used for image segmentation. It partitions points into two sets

based on the eigenvector

corresponding to the second-smallest eigenvalue of the Laplacian matrix

is the diagonal matrix

This partitioning may be done in various ways, such as by taking the median

of the components in

, and placing all points whose component in

, and the rest in

. The algorithm can be used for hierarchical clustering by repeatedly partitioning the subsets in this fashion.

A related algorithm is the Meila-Shi algorithm, which takes the eigenvectors corresponding to the k largest eigenvalues of the matrix

for some k, and then invokes another (e.g. k-means) to cluster points by their respective k components in these eigenvectors.

In biology clustering has many applications

In medical imaging, such as PET scans, cluster analysis can be used to differentiate between different types of tissue and blood in a three dimensional image. In this application, actual position does not matter, but the voxel intensity is considered as a vector, with a dimension for each image that was taken over time. This technique allows, for example, accurate measurement of the rate a radioactive tracer is delivered to the area of interest, without a separate sampling of arterial blood, an intrusive technique that is most common today.

Social network analysis
In the study of social networks, clustering may be used to recognize communities within large groups of people.
Image segmentation
Clustering can be used to divide a digital image into distinct regions for border detection or object recognition.
Data mining
Many data mining applications involve partitioning data items into related subsets; the marketing applications discussed above represent some examples. Another common application is the division of documents, such as World Wide Web pages, into genres.
Search result grouping
In the process of intelligent grouping of the files and websites, clustering may be used to create a more relevant set of search results compared to normal search engines like Google. There are currently a number of web based clustering tools such as Clusty.
Slippy map optimization
Flickr's map of photos and other map sites use clustering to reduce the number of markers on a map. This makes it both faster and reduces the amount of visual clutter.
IMRT segmentation
Clustering can be used to divide a fluence map into distinct regions for conversion into deliverable fields in MLC-based Radiation Therapy.
Grouping of Shopping Items
Clustering can be used to group all the shopping items available on the web into a set of unique products. For example, all the items on eBay can be grouped into unique products. (eBay doesn't have the concept of a SKU)
Mathematical chemistry
To find structural similarity, etc., for example, 3000 chemical compounds were clustered in the space of 90 topological indices.[4]
Petroleum Geology
Cluster Analysis is used to reconstruct missing bottom hole core data or missing log curves in order to evaluate reservoir properties.
Physical Geography
The clustering of chemical properties in different sample locations.

There have been several suggestions for a measure of similarity between two clusterings. Such a measure can be used to compare how well different data clustering algorithms perform on a set of data. Many of these measures are derived from the matching matrix (aka confusion matrix), e.g., the Rand measure, Adjusted Rand Index and the Fowlkes-Mallows Bk measures.[5] With small variations, such kind of measures also include set matching based clustering criteria, e.g., the Meila and Heckerman.

For estimating number of clusters:

For discussion of the elbow criterion: