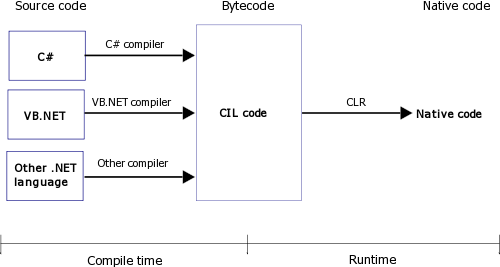 Developers using the CLR write code in a language such as C# or VB.NET. At compile time, a .NET compiler converts such code into CIL code. At runtime, the CLR's just-in-time compiler converts the CIL code into code native to the operating system. Alternatively, the CIL code can be compiled to native code in a separate step prior to runtime. This speeds up all later runs of the software as the CIL-to-native compilation is no longer necessary.

The CLR allows programmers to ignore many details of the specific CPU that will execute the program. It also provides other important services, including the following: