CommunityViz is the name of a group of extensions to ArcGIS Geographic Information System software. CommunityViz is used for urban planning, land use planning, and resource management applications. It provides several options for 3D visualization; many tools and capabilities for planning analysis; and an array of features designed to facilitate public participation and collaboration in the land-use decision-making process. The software is produced in a partnership between the Orton Family Foundation and Placeways, LLC.

Some of its key features include:

Video demos of key functions are available on the product website. [1]

CommunityViz began as an idea in the late 1990s when Noel Fritzinger and his friend Lyman Orton, proprietor of the Vermont Country Store and long-term member of his town’s local planning board, first envisioned a software tool that would make the planning process more accessible to ordinary citizens. After forming the Orton Family Foundation, they recruited lead software developer Brenda Faber and assembled a team to develop the idea. The first commercial version was released in late 2001 and included three components: Scenario Constructor for interactive analysis, SiteBuilder 3D (OEMed from MultiGen-Paradigm) for 3D visualization, and Policy Simulator for agent-based modeling of future outcomes resulting from present-day policy decisions. The price for the suite at that time was approximately $5000 USD.

The new software caused something of a sensation in the planning community, whose members were still accustomed to planning with “markers and mylar.” But initial adoption was not instantaneous, and planners only gradually adjusted to more collaborative planning and new concepts like real-time interactive analysis and realistic 3D fly-throughs.

By 2003 there was enough real-world experience and research to guide a complete redevelopment that resulted in CommunityViz Version 2. The new version was built for the new architecture of ArcGIS 8.x.[2] It changed Scenario Constructor to Scenario 360 and gave it a new, intuitive interface. SiteBuilder 3D was updated, but Policy Simulator was reluctantly dropped from the package. The new design made CommunityViz more accessible to a much wider audience, and it quickly gained popularity.

In 2004 CommunityViz development and operations were spun off from the Foundation into a new company called Placeways, LLC, and simultaneously the price of the software was greatly reduced.[3] With continuing guidance and financial support from the Foundation, Placeways continued with new research and development, introducing Version 3 and its “decision tool” architecture in the fall of 2005.

CommunityViz is used primarily for land-use planning and natural resource management. Because it allows its users to create custom analyses, it can be applied to almost any geographic decision-making process. The largest user groups comprise government planners (local, regional, and national), private planning and design firms, and universities. Most users are already somewhat familiar with GIS or have access to a GIS department. 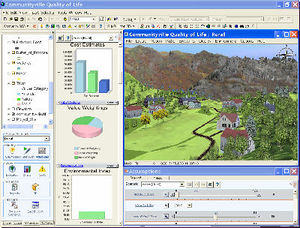 CommunityViz being used for planning a new community

Functionality is "layered," so that users can perform common tasks using standardized "decision tools" or develop their own customized analyses at varying levels of customization and sophistication. Popular decision tools include Build-out, Suitability, TimeScope, and Common Impacts.

"CommunityVis," "Community Viz," "communityviz," "Communitybiz" and "Communityviz" are some of the most common ways of misspelling the name. The correct spelling contains no spaces, a capital "V," and a "z." The abbreviations "CViz" and "CV" are sometimes used.