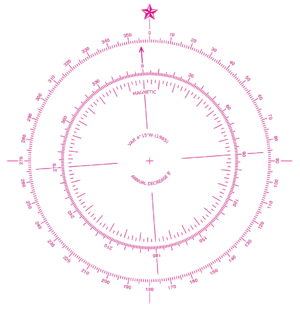 A compass rose is a figure on a map or nautical chart used to display the orientation of the cardinal directions, — north, south, east, and west. It is also the term for the graduated markings found on the traditional magnetic compass. Today, the idea of a compass rose is found on, or featured in, almost all navigation systems, including nautical charts, non-directional beacons (NDB), VHF omnidirectional range (VOR) systems, global-positioning systems (GPS), and similar equipment and devices. Early forms of the compass rose were known as wind roses, since no differentiation was made between a cardinal direction and the wind which emanated from that direction.[1] Today, wind roses are used by meteorologists to depict wind frequencies from different directions at a location.[2] 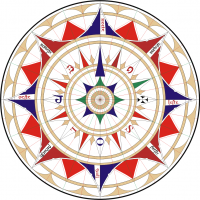 Replica of a 32-point compass rose from a chart by Jorge de Aguiar (1492), the oldest personally signed and dated Portuguese nautical chart

The compass rose is an element of a map used to show direction, usually showing cardinal directions and frequently intermediate direction.

Naming all 32 points on the rose is called boxing the compass.

The "rose" term arises from the fairly ornate figures used with early compasses. A fleur-de-lis figure, evolved from the initial T in the north wind's name Tramontane, is sometimes used to indicate the north direction. Similarly, on old maps the east was marked with an L for Levante, or with a Christian cross indicating the direction of Jerusalem from the point of view of western Europe's countries.[1]

Early roses were depicted with 12 points at 30° each, as was favored by the Romans. In the Middle Ages map makers moved to the 16-point rose complaining that sailors did not have the education to understand the previous design. The 16-point rose has the uncomfortable number of 22 1/2° between points, but is easily found by halving divisions and may have been easier for those not using a 360° circle. Using gradians, the sixteen-point rose will have exactly twenty-five gradians per point.

A Rose of the Winds is an ancient version of a compass rose which personified compass directions as winds with individual names, such as the west wind Zephyrus and the east wind Eurus. A fountain in Taranto, Italy was inspired by and named after the Rose of the Winds.

The earliest 32-point compass rose was developed by Arab navigators during the Middle Ages.[3] 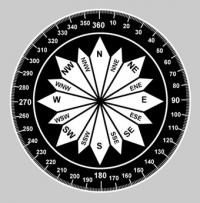 The contemporary compass rose appears as two rings, one smaller and set inside the other. The outside ring denotes true cardinal directions while the smaller inside ring denotes magnetic cardinal directions. True north refers to the geographical location of the north pole while magnetic north refers to the direction towards which the north pole of a magnetic object (as found in a compass) will point. The angular difference between true and magnetic north is called variation, which varies depending on location. The angular difference between magnetic heading and compass heading is called deviation which varies by vessel and its heading.

Pedro Reinel was the first person to draw a standard compass rose.

The Compass Rose is used as the symbol of the worldwide Anglican Communion of churches.[4]

HMS Compass Rose is the name of a fictional Royal Navy corvette in the novel The Cruel Sea. In the interactive fiction game, Beyond Zork, a compass rose is a flower that can control the direction of the wind. The Compass Rose is the name of a significant tavern in Mercedes Lackey's Valdemar fantasy novels. An 8-point compass rose is a prominent feature in the logo of the Seattle Mariners Major League Baseball club. A Java application known as windRose is used to allow PDAs and cell phones to show GPS navigation.[5]