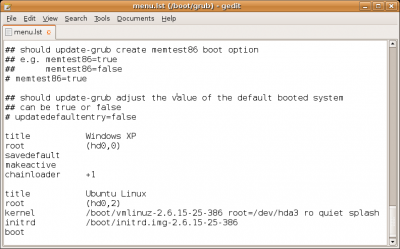 A configuration file for GNU GRUB being modified with gedit. This file contains a list of Operating Systems, which GNU GRUB reads and presents to the user as a menu.

In computing, configuration files, or config files, are used to configure the initial settings for some computer programs. They are used for user applications, server processes and operating system settings. The files are often written in ASCII (rarely UTF-8) and line-oriented, with lines terminated by a newline or carriage return/line feed pair, depending on the operating system. They may be considered a simple database. Some files are created and modified using an ASCII editor. Others are created and modified as a side-effect of changing settings in a graphical user interface (GUI) program. The formats of configuration files are often poorly documented.[citation needed]

Some applications provide tools to create, modify, and verify the syntax of their configuration files. For server processes and operating system settings, the only documentation may be the source code. Some configuration files are partially described by man or help pages.

Recently, XML and YAML have become popular as configuration file formats. They have the advantages of having well-defined syntaxes, and tools to validate and verify the syntax of the files that are created in those formats.

Among the Unix variants, there are hundreds of configuration file formats. Each application or service may have a unique format. Historically, Unix operating system settings were often modified only by editing configuration files. Almost all formats allow entries to be disabled by prepending a special comment character, turning that command line into a comment. Unix user applications often create a file or directory in the home directory of the user upon startup. To hide the file or directory from casual listing of the contents of the home directory, the name of the file or directory is prepended with a period, giving rise to the nickname "dotfile" or "dot file". Server processes often use configuration files stored in /etc, but they may also use their installation directory or a location defined by the system administrator.

Configuration files also do more than just modify settings, they often (in the form of an "rc file") run a set of commands upon startup (ex. a shell rc file might instruct the shell to change directories, run certain programs, delete or create files - many things which do not involve modifying variables in the shell itself and so were not in the shell's dotfiles); according to the Jargon File, this convention is borrowed from "runcom files" on the CTSS operating system.[1] This functionality can and has been extended for programs written in interpreted languages such that the configuration file is actually another program rewriting or extending or customizing the original program; Emacs is the most prominent such example. The "rc" naming convention of "rc files" was inspired by the "runcom" facility mentioned above and does not stand for "resource configuration" or "runtime configuration" as is often wrongly guessed.[2]

On UNIX variants dot files are 'hidden' from listing by default, On Mac OS X these files are sometimes called "hidden files" although other mechanisms exist on Mac OS X to hide a file from view in various tools. The Explorer interface of Microsoft Windows XP does not allow the user to rename a file with an initial '.' though it does allow access to such files, and Windows' Notepad program does allow files to be saved with such names.

IBM's AIX uses an Object Data Manager (ODM) database to store some system settings, some of which need to be available at boot time.

Primarily relied upon two files called CONFIG.SYS and AUTOEXEC.BAT. These were retained up to Windows 98SE, but were not strictly required to run Windows applications.

Within the Microsoft Windows family of operating systems and their attendant applications, the situation is similar. Windows 3.0 had an API for INI files (from "initialization"), but that format is deprecated and many modern Windows programs forgo configuration files to use only the Windows Registry to store information.

If you are running the Microsoft Windows with admin rights, this kind of file can be changed by anyone.

If an user run a simple Batch file that contain an "echo" command, any config file can be changed easily.

Some worms can exploit this to redirect your internet traffic, just changing the browser proxy settings.

IBM's OS/2 uses a binary format also named INI but it is different from the Windows versions. It contains a list of lists of untyped key-value pairs.[1] There are two files for system-wide settings, OS2.INI and OS2SYS.INI. Application developers can choose whether to use them or create a specific file for their applications.

Many language specifications have been created specifically to describe and retain configurations. These are frequently not Turing complete (nor need to be, by definition). A notable exception is Lua, which started out specifically as a configuration language for use in other programs. It evolved into a complete programming language, but retains a phrasing that allows configuration descriptions to be read directly into a native, stateful, tabulated set of variable-key pairings accessible to other programs (via a library), as well as allowing (self or external) invocation of commands to augment configuration activities.

The class includes all markup languages. The trend in the increase of XML and YAML (among other formats) for use as configuration file formats is at least partially attributable to the increase in popularity of open source and platform neutral software applications and libraries. Moreover, the specifications describing these formats are routinely made available to the public, thus increasing the availability of parsers and emitters across programming languages.