There are two approaches for representing three-dimensional map information, and for managing it in the data model.[2] 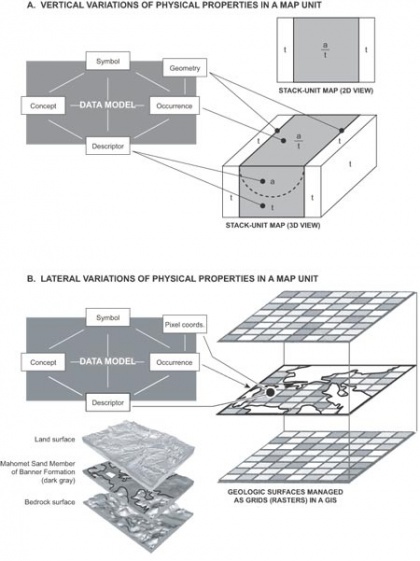 Approaches for representing three-dimensional map information, and for managing it in the data model.[2]

Vector-based stack-unit maps depict the vertical succession of geologic units to a specified depth (here, the base of the block diagram). This mapping approach characterizes the vertical variations of physical properties in each 3-D map unit. In this example, an alluvial deposit (unit “a”) overlies glacial till (unit “t”), and the stack-unit labeled “a/t” indicates that relationship, whereas the unit “t” indicates that glacial till extends down to the specified depth. In a manner similar to that shown in figure 11, the stack-unit’s occurrence (the map unit’s outcrop), geometry (the map unit’s boundaries), and descriptors (the physical properties of the geologic units included in the stack-unit) are managed as they are for a typical 2-D geologic map.[2]

Raster-based stacked surfaces depict the surface of each buried geologic unit, and can accommodate data on lateral variations of physical properties. In this example from Soller and others (1999)[3], the upper surface of each buried geologic unit was represented in raster format as an ArcInfo Grid file. The middle grid is the uppermost surface of an economically important aquifer, the Mahomet Sand, which fills a pre- and inter-glacial valley carved into the bedrock surface. Each geologic unit in raster format can be managed in the data model, in a manner not dissimilar from that shown for the stack-unit map. The Mahomet Sand is continuous in this area, and represents one occurrence of this unit in the data model. Each raster, or pixel, on the Mahomet Sand surface has a set of map coordinates that are recorded in a GIS (in the data model bin that is labeled “Pixel coordinates”, which is the raster corollary of the “Geometry” bin for vector map data). Each pixel can have a unique set of descriptive information, such as surface elevation, unit thickness, lithology, transmissivity, etc.).