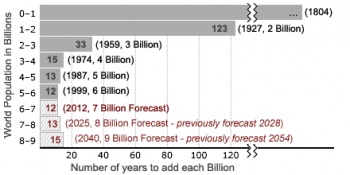 Demography (from Greek demos, people or population, and grapho, description) is the statistical study of all populations. It can be a very general science that can be applied to any kind of dynamic population, that is, one that changes over time or space (see population dynamics). It encompasses the study of the size, structure and distribution of populations, and spatial and/or temporal changes in them in response to birth, migration, aging and death.

Demographic analysis can be applied to whole societies or to groups defined by criteria such as education, nationality, religion and ethnicity. In academia, demography is often regarded as a branch of either anthropology, economics, or sociology. Formal demography limits its object of study to the measurement of populations processes, while the more broad field of social demography population studies also analyze the relationships between economic, social, cultural and biological processes influencing a population.[1]

The term demographics is often used erroneously for demography, but refers rather to selected population characteristics as used in government, marketing or opinion research, or the demographic profiles used in such research.

The term Demography derives from the Greek: δημογϝαφία (dimographia), Etymologically is compound of the words δήμος (dēmos) "people", and γϝαφία (graphia) "write or record"

There are two methods of data collection: direct and indirect. Direct data come from vital statistics registries that track all births and deaths as well as certain changes in legal status such as marriage, divorce, and migration (registration of place of residence). In developed countries with good registration systems (such as the United States and much of Europe), registry statistics are the best method for estimating the number of births and deaths.

The census is the other common direct method of collecting demographic data. A census is usually conducted by a national government and attempts to enumerate every person in a country. However, in contrast to vital statistics data, which are typically collected continuously and summarized on an annual basis, censuses typically occur only every 10 years or so, and thus are not usually the best source of data on births and deaths. Analyses are conducted after a census to estimate how much over or undercounting took place. Censuses do more than just count people. They typically collect information about families or households, as well as about such individual characteristics as age, sex, marital status, literacy/education, employment status and occupation, and geographical location. They may also collect data on migration (or place of birth or of previous residence), language, religion, nationality (or ethnicity or race), and citizenship. In countries in which the vital registration system may be incomplete, the censuses are also used as a direct source of information about fertility and mortality; for example the censuses of the People's Republic of China gather information on births and deaths that occurred in the 18 months immediately preceding the census.

Indirect methods of collecting data are required in countries where full data are not available, such as is the case in much of the developing world. One of these techniques is the sister method, where survey researchers ask women how many of their sisters have died or had children and at what age. With these surveys, researchers can then indirectly estimate birth or death rates for the entire population. Other indirect methods include asking people about siblings, parents, and children. 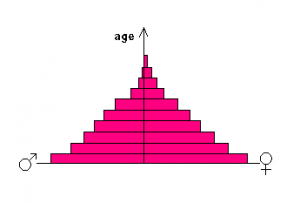 A population pyramid is an age/sex distribution diagram.

Important concepts in demography include:

Note that the crude death rate as defined above and applied to a whole population can give a misleading impression. For example, the number of deaths per 1000 people can be higher for developed nations than in less-developed countries, despite standards of health being better in developed countries. This is because developed countries have relatively more older people, who are more likely to die in a given year, so that the overall mortality rate can be higher even if the mortality rate at any given age is lower. A more complete picture of mortality is given by a life table which summarises mortality separately at each age. A life table is necessary to give a good estimate of life expectancy.

Suppose that a country (or other entity) contains Populationt persons at time t. What is the size of the population at time t + 1 ?

This basic equation can also be applied to subpopulations. For example, the population size of ethnic groups or nationalities within a given society or country is subject to the same sources of change. However, when dealing with ethnic groups, "net migration" might have to be subdivided into physical migration and ethnic reidentification (assimilation). Individuals who change their ethnic self-labels or whose ethnic classification in government statistics changes over time may be thought of as migrating or moving from one population subcategory to another.[2]

More generally, while the basic demographic equation holds true by definition, in practice the recording and counting of events (births, deaths, immigration, emigration) and the enumeration of the total population size are subject to error. So allowance needs to be made for error in the underlying statistics when any accounting of population size or change is made.

Ibn Khaldun (1332-1406) is regarded as the "father of demography" for his economic analysis of social organization which produced the first scientific and theoretical work on population, development, and group dynamics. His Muqaddimah also laid the groundwork for his observation of the role of state, communication and propaganda in history.[3]

The Natural and Political Observations ... upon the Bills of Mortality (1662) of John Graunt contains a primitive form of life table. Mathematicians, such as Edmond Halley, developed the life table as the basis for life insurance mathematics. Richard Price was credited with the first textbook on life contingencies published in 1771,[4] followed later by Augustus de Morgan, ‘On the Application of Probabilities to Life Contingencies’, (1838).[5]

At the end of the 18th century, Thomas Malthus concluded that, if unchecked, populations would be subject to exponential growth. He feared that population growth would tend to outstrip growth in food production, leading to ever increasing famine and poverty (see Malthusian catastrophe); he is seen as the intellectual father of ideas of overpopulation and the limits to growth. Later more sophisticated and realistic models were presented by e.g. Benjamin Gompertz and Verhulst. 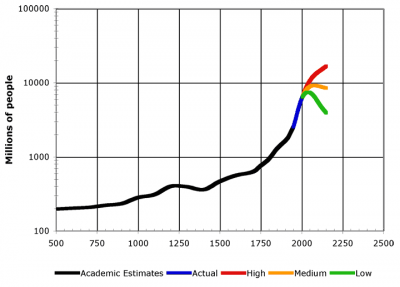 World population from 500CE to 2150, based on UN 2004 projections[7] (red, orange, green) and US Census Bureau historical estimates[8] (black). Only the section in blue is from reliable counts, not estimates or projections.
Main article: Demographic transition

Contrary to Malthus' predictions and in line with his thoughts on moral restraint, natural population growth in most developed countries has diminished to close to zero, without being held in check by famine or lack of resources, as people in developed nations have shown a tendency to have fewer children. The fall in population growth has occurred despite large rises in life expectancy in these countries. This pattern of population growth, with slow (or no) growth in pre-industrial societies, followed by fast growth as the society develops and industrializes, followed by slow growth again as it becomes more affluent, is known as the demographic transition.

Similar trends are now becoming visible in ever more developing countries, so that far from spiraling out of control, world population growth is expected to slow markedly in the next century, coming to an eventual standstill or even declining. The change is likely to be accompanied by major shifts in the proportion of world population in particular regions. The United Nations Population Division expects the absolute number of infants and toddlers in the world to begin to fall by 2015, and the number of children under 15 by 2025.[7] The figure in this section shows the latest (2004) UN projections of world population out to the year 2150 (red = high, orange = medium, green = low). The UN "medium" projection shows world population reaching an approximate equilibrium at 9 billion by 2075. Working independently, demographers at the International Institute for Applied Systems Analysis in Austria expect world population to peak at 9 billion by 2070.[9] Throughout the 21st century, the average age of the population is likely to continue to rise.

The science of population

Populations can change through three processes: fertility, mortality, and migration. Fertility involves the number of children that women have and is to be contrasted with fecundity (a woman's childbearing potential).[10] Mortality is the study of the causes, consequences, and measurement of processes affecting death to members of the population. Demographers most commonly study mortality using the Life Table, a statistical device which provides information about the mortality conditions (most notably the life expectancy) in the population.[11] Migration refers to the movement of persons from an origin place to a destination place across some pre-defined, political boundary. Migration researchers do not designate movements 'migrations' unless they are somewhat permanent. Thus demographers do not consider tourists and travelers to be migrating. While demographers who study migration typically do so through census data on place of residence, indirect sources of data including tax forms and labor force surveys are also important.[12]

Demography is today widely taught in many universities across the world, attracting students with initial training in social sciences, statistics or health studies. Being at the crossroads of several disciplines such as geography, economics, sociology or epidemiology, demography offers tools to approach a large range of population issues by combining a more technical quantitative approach that represents the core of the discipline with many other methods borrowed from social or other sciences. Demographic research is conducted in universities, in research institutes as well as in statistical departments and in several international agencies. Population institutions are part of the Cicred (International Committee for Coordination of Demographic Research) network while most individual scientists engaged in demographic research are members of the International Union for the Scientific Study of Population – IUSSP or, in the United States, in the Population Association of America.

Accordingly, it categorized populations as groups synonymous with political jurisdictions representing gender, religion, age, disability, generation, sexuality, and race, variables which go beyond the vital statistics of births, deaths, and marriages. Given the rapidly growing global population as well as the baby boom in affluent countries such as the United States, these geographers studied the relation between demographic growth, displacement, and access to resources at an international scale.

Examples can be shown through population density maps. A few types of maps that show the spatial layout of population are choropleth, isoline, and dot maps. [15]

Besides describing the makeup of a population, Population geography also compares populations to draw conclusions about physical and human geography.