Dissolve is an application of the conceptual operators that aggregates features often referred to as 'Merge' or 'Amalgamation.' It is a process in which a new map feature is created by merging adjacent polygons, lines, or regions that have a common value for a specified attribute. In GIS, dissolve is one of the Data Management tools used for generalizing features. In choropleth maps, the dissolve operation eliminates the boundaries of enumeration units with a common value, depicting a much larger area holding the same common value. Thus, using the dissolve operator on multiple polygons with a common value will yield one new polygon, combining the dimensions of the original, dissolved polygons. Giving linear features a dotted appearance or connecting linked line segments into one larger line segment in a GIS is also considered a dissolve operation.[1]

Dissolve has various applications in cartography and GIS. For example, road or river datasets often present the same linear feature in a number of segments. This can create problems for analysis or display, but dissolve can be used to combine them together and facilitate their intended use. Polygons are also commonly dissolved. For example, a cartographer or GIS user may desire to show several distinct polygon areas as one contiguous area, such as combining certain areas into one large region (for instance, merging east and west Germany into Germany). [2] Other uses include combining separate counties in a state to emphasize a common variable, or combining multiple countries into their respective continents. The dissolve operation is useful for performing these and many other tasks which a cartographer or GIS user may encounter.

"The merge operator combines an array of related features into a single representative feature without a change in dimension”[3] and has also been referred to as amalgamation [4], dissolving[5], agglomeration[4], dissolution[6], and fusion.[7][3] Some authors have used the term merge to refer to the combination of lines and the term amalgamation to refer to the combination of polygons[3][8][9][6][10][11][12][13], although this operation can be performed on points as well.[3] It should be noted that Merge is different than the Aggregate feature because no change in dimensionality (i.e. point to polygon) occurs. [3][14][6]

As the dissolve process does not retain all of the underlying attribute data of the original undissolved features in the new dissolve layer, it is important to understand how the dissolve operation affects data and how to achieve desired results. It is the removing of boundaries between adjacent polygons having the same value for a specific attribute, combining polygons that would otherwise be assigned the same color or hatch pattern in a thematic map display. 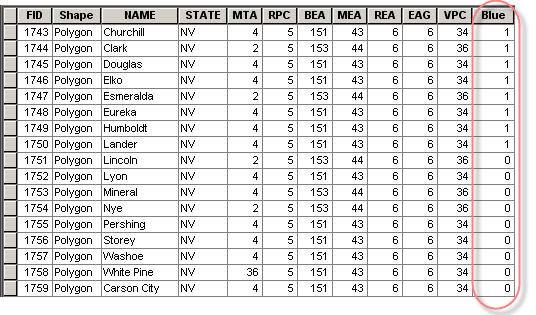 In this example, the original attribute table contains several columns of data, one of which is 'Blue'. Using this data, each county has a value of either 1 or 0 (blue or red), and this is the criteria by which they are symbolized in the map examples, and also by which the dissolve is run. Note that there are other fields of data for counties in this table.

After the dissolve, however, the data is quite different. In the lower table, the attribute table for the dissolved features shows new statistics for the Shape Area and Shape Length, and another column of data is added called Export_Output_Blue.

The Export_Output_Blue column is an updated version of the original 'Blue' column from the undissolved map. Note that all other data that was not part of the dissolve process was removed.

Also note that not all of the blue areas resolved to a single polygon, yet all of the data (Shape_Area and Shape_Length) for each Blue value is summed as a single entry in the data table. Attributes of features that become aggregated by dissolve can be summarized or described using a variety of statistics. The statistic used to summarize attributes is added to the output feature class as a single field with the following naming standard of statistic type + underscore + input field name. For example, if the SUM statistic is used on a field named 'POP', the output will have a field named 'SUM_POP'. To find out more about the syntax and process used in ArcGIS to summarize aggregated data on dissolve, see ESRI Web Help - Dissolve (Data Management).