The Dominion Land Survey (DLS) is the method used to divide most of Western Canada into one-square-mile sections for agricultural and other purposes. It is based on the layout of the Public Land Survey System used in the United States, but has several differences. The DLS is the dominant survey method in the Prairie provinces, and it is also used in British Columbia along the Railway Belt (near the main line of the Canadian Pacific Railway), and in the Peace River Block in the northeast of the province. These regions were surveyed using the DLS with the consent of the British Columbian government, since unlike the Prairie provinces and Northwest Territories B.C. controlled its own public lands upon entering Confederation.

The survey was begun in, 1871, shortly after Manitoba and the Northwest Territories became part of Canada. Covering about 800,000 square kilometres (309,000 sq mi), the survey system and its terminology are deeply ingrained in the rural culture of the Prairies.

The most important north–south lines of the survey are the meridians:

The Meridians were determined by painstaking survey observations and measurements, and in reference to other benchmarks on the continent, but were determined using 19th century technology. The only truly accurate benchmarks at that time were near the prime meridian in Europe. Benchmarks in other parts of the world had to be estimated by the positions of the sun and stars. Consequently, although they were remarkably accurate for the time, today they are known to be several hundred metres in error. Before the survey was even completed it was established that for the purposes of laws based on the survey, the results of the physical survey would take precedence over the theoretically correct position of the meridians. This precludes, for example any basis for a boundary dispute between Alberta and Saskatchewan on account of surveying errors.

The main east–west lines are the base lines. The First Base Line is at 49° north, which forms much of the Canada–United States border in the West. Each subsequent base line is slightly more than 24 miles (about 39 km) to the north of the previous one.

Starting at each intersection of a meridian and a base line and working west (also working east of the First Meridian), nearly square townships are surveyed, which are about six miles (9.8 km) in both north–south and east–west extent. There are two tiers of townships to the north and two tiers to the south of each base line.

Because the east and west edges of townships (range lines) are meridians of longitude, they converge towards the North Pole. Therefore, the north edge of every township is slightly shorter than the south. Only along the base lines do townships have their nominal width from east to west. The two townships to the north of a base line gradually narrow as one moves north, and the two to the south gradually widen as one moves south. Halfway between two base lines, wider-than-nominal townships abut narrower-than-nominal townships. The east and west boundaries of these townships therefore do not align, and north–south roads that follow the survey system have to jog to the east or west. These east–west lines halfway between base lines are called correction lines.

Townships are designated by their township number and range number. Township 1 is the first north of the First Base Line, and the numbers increase to the north. Range numbers recommence with Range 1 at each meridian and increase to the west (east of First Meridian they are numbered eastward). On maps, township numbers are marked in Arabic numerals, but range numbers are often marked in Roman numerals; however, in other contexts Arabic numerals are used for both. Individual townships are designated such as "Township 52, Range 25 west of the Fourth Meridian," abbreviated "52-25-W4." In Manitoba, the First Meridian is the only one used, so the abbreviations are even more terse, e.g., "3-1-W" and "24-2-E." 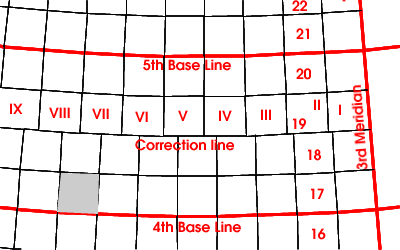 A part of the Dominion Land Survey (convergence of meridians exaggerated). The shaded township is Township 17, Range 8 west of the Third Meridian.

Every township is divided into thirty-six sections, each about one-mile (1.6 km) square. Sections are numbered within townships as follows (north at top):

In turn, each section is divided into four quarter sections: southeast, southwest, northwest and northeast. This quarter-section description is primarily used by the agricultural industry. The full legal description of a particular quarter section is "the Northeast Quarter of Section 20, Township 52, Range 25 west of the Fourth Meridian", abbreviated "NE-20-52-25-W4." A section may also be split into as many as 16 legal subdivisions (LSDs). LSDs are commonly used by the oil and gas industry as a precise way of locating wells, pipelines, and facilities. LSDs can be "quarter-quarter sections" (square land parcels roughly 1/4 mile on a side, comprising roughly 40 acres or 162,000 m2 in area) - but this is not necessary. Many are other fractions of a section (a half-quarter section - roughly 80 acres or 323,000 m2 in area is common.) LSDs may be square, rectangular, and occasionally even triangular. LSDs are numbered as follows (north at top):

In order to fully understand how the townships, sections, 1/4 sections, and legal subdivisions were set out, one should refer to the "Manual of Instructions for the Survey of Dominion Lands" available for free from Natural Resources Canada Centre for Cadastral Management.

Occasionally, resource companies assign further divisions within LSDs such as "A, B, C, D etc." for example, to distinguish between multiple sites within an LSD. These in no way constitute an official change to the Dominion land Survey system, but nonetheless often appear as part of the legal description.

Between certain sections of a township run road allowances (but not all road allowances have had an actual road built on them). The road allowances add to the size of the township (they do not cut down the size of the sections): this is the reason base lines are not exactly 24 miles (39 km) apart. In townships surveyed from 1871 to 1880 (most of southern Manitoba, part of southeastern Saskatchewan and a small region near Prince Albert, Saskatchewan), there are 1.5-chain-wide (30.2 m) road allowances surrounding every section. In townships surveyed from 1881 to the present, road allowances are reduced both in width and in number. They are one chain wide (20.12 m) and run north–south between all sections; however, there are only three east–west road allowances in each township, on the north side of sections 7 to 12, 19 to 24 and 31 to 36. This results in a road allowance every mile going east-west, and a road allowance every two miles going north-south. This arrangement reduced land allocation for roads, but still provides road-access to every quarter-section. 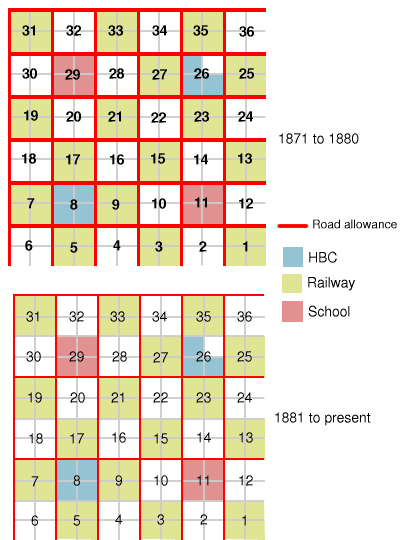 Certain sections of townships were reserved for special purposes:

Legal surveys conducted before and after the Dominion Land Survey grid was laid out often have their own legal descriptions and delineations. Early settlement lots still retain their own original legal descriptions, but often have townships superimposed over them for the sake of convenience or for certain tasks. Urban developments superimpose new survey lots and plans over the older section and township grid also.

Thomson, D.W. (1966 & 1967) Men and Meridians: The History of Surveying and Mapping in Canada, 3 vols. Ottawa: Department of Energy, Mines and Resources.