From wiki.gis.com
Jump to: navigation, search
The Dymaxion Map of the Earth, also known as the Fuller Projection, is a projection of a global map onto the surface of a polyhedron, which, when expanded to a flat, two-dimensional map, retains most of the relative proportional integrity (relative size and shape) of global features.

A different perspective of the world map. Unlike most projections, the Dymaxion map of the world actually shows Antarctica as coequal to other continents and not distorted beyond recognition.
The Dymaxion Map is the most well known flat map of the entire surface of the earth that reveals virtually contiguous continents as an island in one ocean, without any visible distortion of the relative shapes and sizes of the land areas. 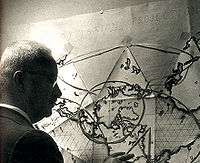 The Dymaxion Map projection was created by the visionary designer and inventor Buckminster Fuller and patented in 1946. The 1954 version published by Fuller under the title The Air-Ocean World Map used a slightly modified but mostly regular icosahedron as the base for the projection, and this is the version most commonly referred to today.

The term "Dymaxion" was used by Mr. Fuller for several of his projects, such as the Dymaxion car and Dymaxion House or the Dymaxion Map. Unlike most other projections, the Dymaxion is intended purely for representations of the entire globe. The word Dymaxion, Spaceship Earth and the Fuller Projection design are trademarks of the Buckminster Fuller Institute.[1][2]

All flat world map representations of the spherical globe contain some amount of distortion either in shape, area, distance or direction measurements. On a Mercator world map, Greenland appears to be three times its relative globe size and Antarctica appears as a long thin white strip along the bottom edge of the map.

As an example of the degree to which distortion can affect maps, especially on a world map scale, the Robinson Projection, a popular projection not long ago, contains a large amount of area distortion, with Greenland appearing 60 percent larger than its relative globe size. The Dymaxion map is superior to most other projections when shape and size integrity are important to preserve in a global map.