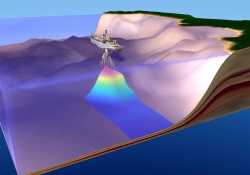 Illustration of echo sounding.
Echo sounding is the technique of using sound pulses directed from the surface or from a submarine vertically down to measure the distance to the bottom by means of sound waves. Echo sounding can also refer to hydroacoustic "echo sounders" defined as active sound in water (sonar) used to study fish. Hydroacoustic assessments have traditionally employed mobile surveys from boats to evaluate fish biomass and spatial distributions. Conversely, fixed-location techniques use stationary transducers to monitor passing fish.

After the disaster of the Titanic in 1912, the German physicist Alexander Behm conducted some research to find a way to detect icebergs. He discovered the technique of echo sounding which turned out to be inefficient in spotting icebergs, but a great tool to measure the depth of the sea. Behm had his invention patented in 1913. While the first serious attempts to quantify fish biomass were conducted in the 1960's, major advances in equipment and techniques took place at hydropower dams in the 1980’s. Some evaluations monitored fish passage 24 hours a day for over a year, producing estimates of fish entrainment rates, fish sizes, and spatial and temporal distributions.

In the 1970’s, the dual-beam technique was invented, permitting direct estimation of fish size in-situ via its target strength. The first portable split-beam hydroacoustic system was developed by HTI (Hydroacoustic Technology, Incorporated) in 1991, and provided more accurate and less variable estimates of fish target strength than the dual-beam method. It also permitted tracking of fish in 3D, giving each fish’s swimming path and absolute direction of movement. This feature proved important for evaluations of entrained fish in water diversions as well as for studies of migratory fish in rivers. In the last 35 years, tens of thousands of mobile and fixed-location hydroacoustic evaluations have been conducted worldwide.

Distance is measured by multiplying half the time from the signal's outgoing pulse to its return by the speed of sound in the water, which is approximately 1.5 kilometres per second. Echo sounding is effectively a special purpose application of sonar used to locate the bottom.

As well as an aid to navigation (most larger vessels will have at least a simple depth sounder), echo sounding is commonly used for fishing. Variations in elevation often represent places where fish congregate. Schools of fish will also register. Most charted ocean depths use an average or standard sound speed. Where greater accuracy is required average and even seasonal standards may be applied to ocean regions. For high accuracy depths, usually restricted to special purpose or scientific surveys, a sensor may be lowered to observe the factors (temperature, pressure and salinity) used to calculate sound speed and thus determine the actual sound speed in the local water column.

In areas where detailed bathymetry is required, an Autonomous Underwater Vehicle (AUV) can be deployed to make a high resolution map. These maps are made using a multibeam echosounder (MBES) that measures the time it takes for a pulse of sound emitted from the AUV to travel to the ocean floor and back. The MBES transmitting and listening devices are known as transducers. A good MBES will have around one hundred transducers, the output from which can be combined in such a way as to enhance the sound transmitted towards or arriving from a particular direction. This technique is known as beam forming. The travel time and direction of the sound return can be converted to a depth relative to the AUV. The vertical position of the AUV in the ocean is determined using a pressure gauge. The accuracy of this process is in the order of centimeters.