An ellipsoid is a type of quadric surface that is a higher dimensional analogue of an ellipse. It is similar to a sphere, except that the radii along one of the axis are longer than the radii along the other axis. It is important to understand ellipsoids in geography because the shape of the Earth is an ellipsoid, with the distance around the Equator longer than the distance around the Prime Meridian. Therefore, all map projections must take into account that the Earth is an ellipsoid to help minimize distortion.

where ax and ay are the transverse, equatorial radii (along the X- and Y- axes) and b is the conjugate, polar radius (along the Z-axis), all of which are fixed positive real numbers determining the shape of the ellipsoid (traditionally, ax and ay are denoted as a and b, respectively——thereby defining the equator as an ellipse——and b as c; however, in most cases——such as Earth——the equator is considered spherical, with the equatorial radius being defined simply as a and the polar as b——like an ellipse——thus a,b,c notation can be needlessly confusing).

More generally, a not-necessarily-axis-aligned ellipsoid is defined by the equation

where A is a symmetric positive definite matrix and x is a vector. In that case, the eigenvectors of A define the principal directions of the ellipsoid and the inverse of the square root of the eigenvalues are the corresponding equatorial radii.

The points (ax,0,0), (0,ay,0) and (0,0,b) lie on the surface and the line segments from the origin to these points are called the semi-principal axes. These correspond to the semi-major axis and semi-minor axis of the appropriate ellipses. 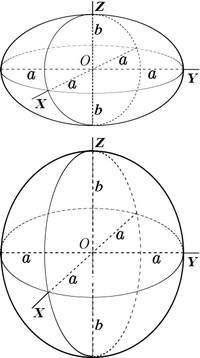 Ellipsoids of revolution (spheroid) with a pair of equal semi-axes (a) and a distinct third semi-axis (b) which is an axis of symmetry. The ellipsoid is oblate or prolate as b is less than or greater than a. 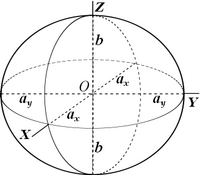 Tri-axial ellipsoid with distinct semi-axes ax ,ay and b

Scalene ellipsoids are frequently called "triaxial ellipsoids",[1] the implication being that all three axes need to be specified to define the shape.

A biaxial ellipse can be parameterized with Cartesian coordinates as

is a point's reduced, or parametric, latitude and

is its planetographic longitude, an ellipsoid can be parameterized either triaxially or biaxially, by making

a variable with respect to

(Note that this parameterization is not 1-1 at the poles, where

The volume of an ellipsoid is given by the formula

Note that this equation reduces to that of the volume of a sphere when all three elliptic radii are equal, and to that of an oblate or prolate spheroid when two of them are equal.

The surface area of an ellipsoid is given by:

is the modular angle, or angular eccentricity;

are the incomplete elliptic integrals of the second and first kind, respectively:

In the case of a spheroid, the above simplifies to closed-form expressions:

An approximate formula for any ellipsoid is:

In the "flat" limit of

, the area is approximately

The mass of an ellipsoid of uniform density is:

The mass moments of inertia of an ellipsoid of uniform density are:

It can easily be shown that if ax=ay=b, then the moments of inertia reduce to those for a uniform-density sphere.

Conversely, if the mass and principle inertias of an arbitrary rigid body are known, an equivalent ellipsoid of uniform density can be constructed, with the following characteristics: 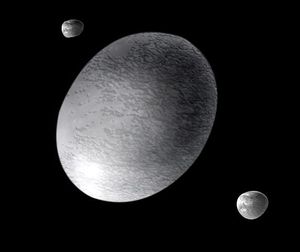 Artist's conception of a scalene dwarf planet with two moons

Scalene ellipsoids and cuboids rotate stably along their major or minor axes, but not along their median axis. This can be seen experimentally by throwing an eraser with some spin. In addition, moment of inertia considerations mean that rotation along the major axis is more easily perturbed than rotation along the minor axis. One practical effect of this is that scalene astronomical bodies such as generally rotate along their minor axes (as does the Earth, which is merely oblate); in addition, because of tidal locking, scalene moons in synchronous orbit such as those of Saturn orbit with their major axis aligned radially to their planet.

A relaxed ellipsoid, that is, one in hydrostatic equilibrium, has an oblateness ax − b directly proportional to its mean density and mean radius. Ellipsoids with a differentiated interior—that is, a denser core than mantle—have a lower oblateness than a homogeneous body. Over all, the ratio (ay–b)/(ax−b) is approximately 0.25, though this drops for rapidly rotating bodies.[4]

If one applies an invertible linear transformation to a sphere, one obtains an ellipsoid; it can be brought into the above standard form by a suitable rotation, a consequence of the spectral theorem. If the linear transformation is represented by a symmetric 3-by-3 matrix, then the eigenvectors of the matrix are orthogonal (due to the spectral theorem) and represent the directions of the axes of the ellipsoid: the lengths of the semiaxes are given by the eigenvalues.

The intersection of an ellipsoid with a plane is either empty, a single point, or an ellipse (including a circle).

One can also define ellipsoids in higher dimensions, as the images of spheres under invertible linear transformations. The spectral theorem can again be used to obtain a standard equation akin to the one given above. 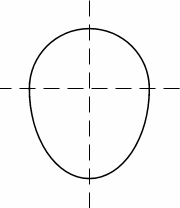 The shape of a chicken egg is approximately that of half each a prolate and roughly spherical (potentially even minorly oblate) ellipsoid joined at the equator, sharing a principal axis of rotational symmetry.[5] Although the term egg-shaped usually implies a lack of reflection symmetry across the equatorial plane, it may also refer to true prolate ellipsoids. It can also be used to describe the 2D figure that, revolved around its major axis, produces the 3D surface. See also oval.

Although on small scales earth's true shape is practically irrelevant, it is essential to take the earth's shape into account when measuring distances between two points, as the distance across the surface of a sphere could greatly differ from that of an ellipsoid. Also, when dealing with coordinate systems, it is critical to be attentive to the ellipsoid used. The same point on earth can have drastically different locations according to different ellipsoids. [6]