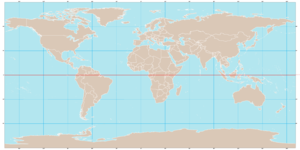 World map showing the line of the equator. 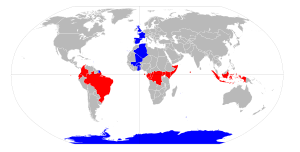 The nations that touch the equator (red) and the prime meridian (blue).
For other uses, see Equator (disambiguation).

Geodesy of the equator 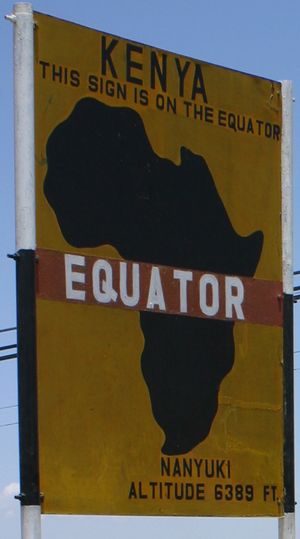 The equator is one of the five main circles of latitude that are based on the relationship between the Earth's axis of rotation and the plane of the Earth's orbit around the sun. It is the only line of latitude which is also a great circle. The imaginary circle obtained when the Earth's equator is projected onto the sky is called the celestial equator.

The Sun in its seasonal movement through the sky, passes directly over the equator twice each year, on the March and September equinoxes. At the equator, the rays of the sun are perpendicular to the surface of the earth on these dates. 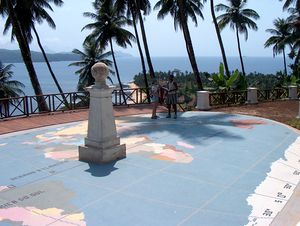 The equator marked as it crosses Ilhéu das Rolas, in São Tomé and Príncipe

Places on the equator experience the quickest rates of sunrise and sunset in the world. They are also the only places in the world where the sun can go directly from the zenith to the nadir and from the nadir to the zenith. Such places also have a theoretical constant 12 hours of day and night throughout the year (in practice there are variations of a few minutes due to the effects of atmospheric refraction and because sunrise and sunset are measured from the time the edge of the Sun's disc is on the horizon, rather than its center). North or south of the equator day length increasingly varies with latitude and the seasons. 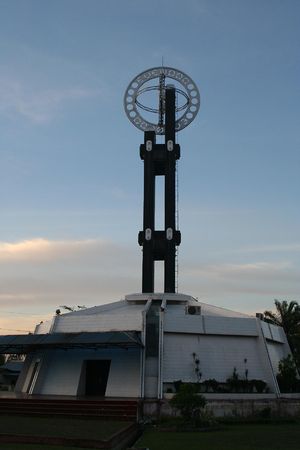 A monument marking the equator at the city of Pontianak, Indonesia

Locations near the equator are good sites for spaceports, such as the Guiana Space Centre in Kourou, French Guiana, as they are already moving faster than any other point on the Earth due to the Earth's rotation, and the added velocity reduces the amount of fuel needed to launch spacecraft. Spacecraft launched in this manner must launch to the east to use this effect.

For high precision work, the equator is not quite as fixed as the above discussion implies. The true equatorial plane must always be perpendicular to the Earth's spin axis. Although this axis is relatively stable, its position wanders in approximately a 9 metres (30 ft) radius circular motion each year. Thus, the true equator moves slightly. This, however, is only important for detailed scientific studies. The effect is quite small, and the width of a line marking the equator on almost any map will be much wider than the error.

The "Marco Zero" in Macapá, Brasil.

Near the equator there is no summer, winter, autumn or spring. Temperatures are high year round (permanent "summer"), with the exception of periods during the wet season and at higher altitudes. In many tropical regions people identify two seasons: wet and dry. However, most places close to the equator are wet throughout the year, and seasons can vary depending on a variety of factors including elevation and proximity to an ocean. The rainy and humid conditions mean that the equatorial climate is not the hottest in the world.

The equator traverses the land and/or territorial waters of 14 countries. Starting at the Prime Meridian and heading eastwards, the equator passes through:

Despite its name, no part of Equatorial Guinea's territory lies on the equator. However, its island of Annobón is about 155 kilometres (100 mi) south of the equator, and the rest of the country lies to the north. The country that comes closest to the equator without actually touching it is Peru.

The English-speaking seafaring tradition maintains that all sailors who cross the equator during a nautical voyage must undergo rites of passage and elaborate rituals initiating them into The Solemn Mysteries of the Ancient Order of the Deep. Those who have never "crossed the line" are derisively referred to as "pollywogs" or simply "slimy wogs". Upon entering the domain of His Royal Majesty, Neptunus Rex, all wogs are subject to various initiation rituals performed by those members of the crew who have made the journey before. Upon completion of the initiation ceremony, the wogs are then known as "trusty Shellbacks". If the crossing of the equator is done at the 180th meridian, the title of "Golden Shellback" is conferred, recognizing the simultaneous entry into the realm of the Golden Dragon. If the crossing occurs at the Greenwich or Prime Meridian, the sailor is considered to be an "Emerald Shellback".[1]

Exact length of the equator