An often-cited result of Earth's equatorial bulge is that the highest point on Earth, measured from the center outwards, is the peak of Mount Chimborazo in Ecuador, rather than Mount Everest. But since the ocean, like the Earth and the atmosphere, bulges, Chimborazo is not as high above sea level as Everest is.

The equilibrium as a balance of energies 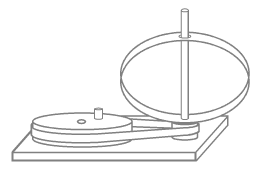 When spun, the spring-metal band bulges at its equator and flattens at its poles in analogy with the Earth.

Gravity tends to contract a celestial body into a perfect sphere, the shape for which all the mass is as close to the center of gravity as possible. Rotation causes a distortion from this spherical shape; a common measure of the distortion is the flattening (sometimes called ellipticity or oblateness), which can depend on a variety of factors including the size, angular velocity, density, and elasticity.

To get a feel for the type of equilibrium that is involved, imagine someone seated in a spinning swivel chair, with weights in his hands. If the person in the chair pulls the weights towards him, he is doing work and his rotational kinetic energy increases. The increase of rotation rate is so strong that at the faster rotation rate the required centripetal force is larger than with the starting rotation rate.

Something analogous to this occurs in planet formation. Matter first coalesces into a slowly rotating disk-shaped distribution, and collisions and friction convert kinetic energy to heat, which allows the disk to self-gravitate into a very oblate spheroid.

As long as the proto-planet is still too oblate to be in equilibrium, the release of gravitational potential energy on contraction keeps driving the increase in rotational kinetic energy. As the contraction proceeds the rotation rate keeps going up, hence the required force for further contraction keeps going up. There is a point where the increase of rotational kinetic energy on further contraction would be larger than the release of gravitational potential energy. The contraction process can only proceed up to that point, so it halts there.

The Earth's rate of rotation is slowing down mainly because of tidal interactions with the Moon and the Sun. Since the solid parts of the Earth are ductile, the Earth's equatorial bulge has been decreasing in step with the decrease in the rate of rotation.

The forces at play in the case of a planet with an equatorial bulge due to rotation.
Red arrow: gravity
Green arrow, the normal force
Blue arrow: the resultant force

In calculations, when a coordinate system is used that is co-rotating with the Earth, the vector of the fictitious centrifugal force points outward, and is just as large as the vector representing the centripetal force.

In summary, there are two contributions to the fact that the effective gravitational acceleration is less strong at the equator than at the poles. About 70 percent of the difference is contributed by the fact that objects circumnavigate the Earth's axis, and about 30 percent is due to the non-spherical shape of the Earth.

The diagram illustrates that on all latitudes the effective gravitational acceleration is decreased by the requirement of providing a centripetal force; the decreasing effect is strongest on the equator.

The fact that the Earth's gravitational field slightly deviates from being spherically symmetrical also affects the orbits of satellites and changes their orbits away from pure ellipses. This is especially important in the case of the trajectories of GPS-satellites.

Generally any celestial body that is rotating (and that is sufficiently massive to draw itself into spherical or near spherical shape) will have an equatorial bulge matching its rotation rate. Saturn is the planet with the largest equatorial bulge in our solar system (11808 km, 7337 miles).

The following is a table of the equatorial bulge of some major celestial bodies of our solar system:

Mathematically, for flattening we have:

is the equatorial radius,

is the polar radius and b:a is the aspect ratio. The approximation is valid in the case of a fluid planet of uniform density; it is a function of the Newtonian constant of gravitation

(PDF-file, 312 KB) Available as part of the MIT OpenCourseWare initiative