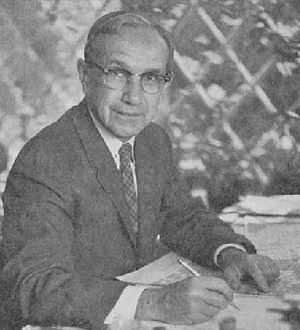 Erwin Raisz
Erwin Josephus Raisz (1893-1968) was a distinguished, influential cartographer who helped pioneer and standardize the field of modern cartography in the 20th century with his 1938 publication of General Cartography (McGraw Hill), the first complete textbook on cartography written in English.

Mr. Raisz was born in Hungary. As the son of a civil engineer, he was introduced to maps and their uses when his father took him on assignments in his youth. He was acclaimed for his unique artistic style, and in the course of his career created a substantial number of visually appealing hand-drawn maps and detailed geomorphological and landform sketches.

Raisz received a degree in civil engineering and architecture from the Royal Polytechnicum in Budapest in 1914. After a brief term in the army he worked for an engineering firm before immigrating to the United States in 1923. He worked for the Ohman Map Company in New York City while attending graduate school at Columbia University. While at Columbia he was the first to offer a course in cartography, and it was one of the first such courses in the United States. In 1929 he received his Ph.D. in Geology with a dissertation entitled "Scenery of Mount Desert Island: its origin and development."

In 1931 Raisz joined the Institute of Geographical Exploration at Harvard University. For nearly twenty years he taught cartography at Harvard and was curator of their Map Collection. In the course of his career he was affiliated with Clark University and the Universities of Virginia, Florida, British Columbia and Rio de Janeiro. He has produced thousands of maps, dozens of articles, four books and two atlases. His early work consisted mainly of landform drawings. He was accurate, fast and prolific. His fine drawing ability was complemented by an excellent memory. His drawing style explained the landscape, allowing for easy interpretation of landform features. "Combining a scientist's fascination with geomorphology with an artist's drawing ability, he created maps that continue to intrigue us with their accuracy, aesthetic appeal, and elegance."(Joseph Garver, Boston Map Society Newsletter, 11/98).

The style advanced by Raisz was unique. Raisz perfected the pen and ink style and his work is recognized by many geographers and cartographers as unsurpassed. He significantly helped to shape the field of cartography in the United States. He was appointed the first map supplement Editor of the "Annals of the Association of American Geographers." His papers were read before meetings of the members of the Association of American Geographers, The American Congress on Surveying and Mapping and the International Geographical Congress.

At the time of his death he was assisting in the compilation of the "National Atlas of the United States." He perfected block-pile maps, introduced value-by-area-cartograms, created the orthoapsidal projection (also called the Armadillo projection or Raisz Armadillo projection), essentially a small-scale variation of an isometric projection which portrays the earth as if it were depicted on the shell of an armadillo[1]. However, he is best known for his landform and physiographic maps. His famous shaded relief depiction of terrain almost appears three-dimensional, exemplifying the artistic and informative values of cartography[2]. He made maps of continents, countries, and states that are still used today[3].

Mr. Raisz's interests were varied and he was particularly interested in advancing the understanding of cartography. He was very aware of the changes time had on the cartographer's craft. In his later years he put effort into advancing ideas, such as the use of aerial photographs. He studied the use of Gemini photographs in cartography and was also skeptical about the use of computers to produce maps. He feared that there would be a loss of reality and that these maps were being produced by skilled technicians with little interest in geography or cartography.

Mr. Raisz traveled extensively around the world for his work and at the time of his death on December 1, 1968 he was in Bangkok, Thailand en route to present a paper at the International Geographical Congress meeting in New Delhi, India.

Raisz Landform Maps continues to be a family-owned company committed to ensuring that Erwin Raisz's work lives on.[4]

Raisz was a pioneer in cartography and always wanted to improve and create diverse ways to understand cartography. Right before he died, he started to think that aerial photographs could help to improve cartography, but at the same time, he did not like the idea of computer making map because he thought that they would not be true to reality[5]. He made different maps of North America[6] and the different regions of the United States[7], as well as Asia[8] and Europe[9].

Raisz used the technique of Physiographic illustration where he “generalized texture to imitate landform shapes over a large area”. He combines hill and relief drawing to represent the different geomorphological patterns of the Earth[10].