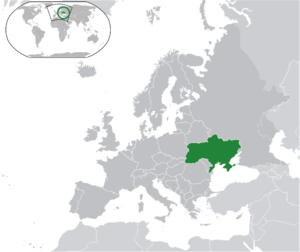 A map with a strong figure-ground contrast. Ukraine is clearly the figure (the map is thus about Ukraine), while the other countries and the ocean are the ground. Europe appears as a secondary figure.
Figure-ground contrast on a map is the distinction between one or more objects of interest (the figure) and the remainder of the map (the ground). During the vision-cognition process, people need to focus attention on particular objects, relegating the rest of the visual field as unimportant (for the moment at least). In most maps, the figure phenomena represent the primary subject of the map, while the ground phenomena are present only to give context. In a map utilizing good figure-ground contrast, the figure is clearly recognizable as a distinct entity largely contained within the map, while the ground often appears as a texture that extends beyond the scope of the map.

As part of map composition, the principle of figure-ground contrast is closely related to the principle of visual hierarchy, and the two are typically synergistic. Both are based on establishing contrast between the objects on the map, and both have the goal of making the visual organization of the map match the conceptual organization of the intended purpose of the map. The difference is that visual hierarchy is about making the primary object of the map look important, while figure-ground contrast is about making the primary object look like an object.

Differentiation is described as the ability to easily discriminate the main figure from the ground. This can be accomplished by designing the desired figure as visually distinct and reducing the level of distraction caused by the ground. By adding surface patterns, colors, or textures to the figure, visual differentiation will lend to the reader's ability to distinguish the subject of the map [1]. 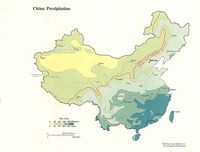 A closed form map of the mean precipitation of China. Only China is shown, so it is clear that China is the subject of the map.
Closure is the perception of an object as a complete, self-contained whole.[2]. Viewers can mentally complete or close unfinished objects, but this distracts from the sense of figure. The location and shape of central figures on a map can be adjusted by varying the scale, projection, and format [3]. For example, a map of the contiguous United States of America should have an extent that completely covers the lower United States, providing closure and allowing recognition of this region as the figure. Oceans and land that belonging to Canada, Mexico, or other countries should extend off of the map (unclosed) makes it difficult to easily recognize one as figure and the other as ground. 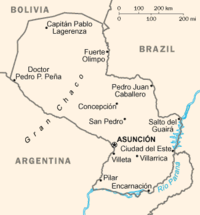 Although some of the surrounding areas are included, the subject of the map is clearly Paraguay due to it being centered.

The figure of emphasis should be centrally located and surrounded by areas of a different character with contrast that lessens ground importance visually and emphasized the main figure. Both alignment and centering can be achieved through measurement or through visual approximation [4]. The concept of centrality is important because the object located in the center of a map is most often assumed to be the figure. Other map elements can be centered in the remaining visual space after the figure has been centered. 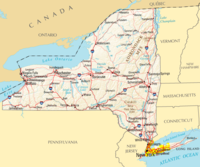 The state of New York is differentiated by the topographic texture in this map.

Articulation utilizes texture to differentiate figure from ground. One common example of using articulation on a map is differentiating a continent from the ocean. The ocean, in most cases, will be the ground and the continent will be the figure [5]. By adding fine-textured shading to water, the continent pops out visually as the figure [6]. Another method that can be employed for articulation called is vignetting, or the inclusion of brightness gradients at the land-water edge.

In this map, the border of Montana is well-contrasted against the ground and is consequently easy to distinguish.

Good contour on the map can be described as the viewer’s ability to continue the line throughout the map. The figure is formed by a contour or outline (as opposed to an isometric contour line), the common boundary between the figure and ground, usually through a brightness contrast [7]. If a figure is not separated entirely from the ground, a simple black contour line can be drawn around the figure enclosing it and thus differentiating it from the ground [8].

Intellectual hierarchy, also known as a scale of concepts [9], refers to the idea that some map features are more important than others. The placement on a map or the ordering of information will convey relative importance of map features to the percipient. If developed on the map correctly, the intellectual hierarchy will correspond to the visual hierarchy established on the map. By developing a visual hierarchy, the percipient can distinguish relative importance to map objects, drawing attention to the most important objects first. By emphasizing the colors of important figures and fading out the colors on less important figures, the perceived distance between the two is increased. Also by employing color contrasts, contour sharpness can be adjusted [10].

Fields other than cartography, such as psychology, neurology, and computer science, have studied differentiation of figure from ground. Many studies have employed different experiments, varying the shades, textures, and orientations of test pictures to determine the best method for figure-ground design with mixed results. A current application of figure-ground research is the development of computer vision for robots. By studying the way humans perceive figure and ground, methods can be developed to improve computer vision algorithms [11].