From wiki.gis.com
Jump to: navigation, search
For other uses, see Furlong (disambiguation).

Five furlongs are approximately 1 kilometer (1.00584 km to be exact). Since the original definition of the meter was one-quarter of one ten-millionth of the circumference of the Earth (along the great circle coincident with the meridian of longitude passing through Paris), the circumference of the Earth is about 40,000 km or about 200,000 furlongs.

The name furlong derives from the Old English words furh (furrow) and lang (long). Dating back at least to the ninth century, it originally referred to the length of the furrow in one acre of a plowed open field (a medieval communal field which was divided into strips). The system of long furrows arose because turning a team of oxen pulling a heavy plow was difficult. This offset the drainage advantages of short furrows and meant furrows were made as long as possible. An acre is an area that is one furlong long and one chain (22 yards) wide. For this reason, the furlong was once also called an acre's length, though of course in modern usage an area of one acre can be any shape.

The furlong was historically viewed as equivalent to the Roman stade (stadium), which in turn derived from the Greek system. For example the King James Bible will use the term "furlong" in place of the Greek "stadion", whereas modern translations will translate into miles in the main text and relate the original numbers in footnotes.

In the Roman system, there were 625 feet to the stade, eight stade to the mile, and three miles to the league. A league was considered to be the distance a man could walk in one hour, and the mile (mille, meaning one thousand) consisted of 1000 passus (paces, 5 feet, or double-step).

After the fall of Rome, Medieval Europe continued with the Roman system, which proceeded to "diversify" leading to serious complications in trade, taxation, etc. Around the turn of the century of 1300, England by decree standardized a long list of measures. Among the important units of distance and length at the time were foot, yard, rod, furlong and mile. The rod was 5½ yards or 16½ feet (= 3 feet/yard × 5½ yards), and the mile was 8 furlongs, so the definition of the furlong became 40 rods and that of the mile became 5280 feet (= 8 furlongs × 40 rods/furlong × 16½ feet/rod).

The official use of furlong was abolished in the United Kingdom under the Weights and Measures Act of 1985, which also abolished from official use many other traditional units of measurement. 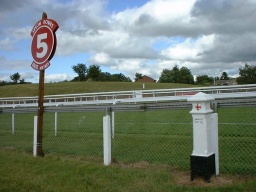 Today the unit enjoys very limited use, with the notable exception of horse racing measurements. Distances for thoroughbred horse races in the United Kingdom, Ireland, Canada, and the United States are still given in miles and furlongs (example).

The city of Chicago's street numbering system allots a measure of 800 address units to each mile, in keeping with the city's system of eight blocks per mile. This means that every block in a typical Chicago neighborhood (in either North/South or East/West direction but rarely both) is approximately one furlong in length. Salt Lake City's blocks are also each a square furlong in the downtown area. However, the blocks are irregular in shape as one moves further out from the center, but the numbering system remains the same (800 units to each mile) everywhere in Salt Lake County. Bus stops in Ann Arbor, Michigan are about a furlong apart. Blocks in central Logan, Utah, and in large sections of Phoenix, Arizona are similarly a square furlong in extent (eight to a mile, which explains the series of freeway exits: 19th Ave, 27th, 35th, 43rd, 51st, 59th...). City blocks in Melbourne's Hoddle Grid are also one furlong in length.

The furlong is also a base unit of the obscure FFF System of units.