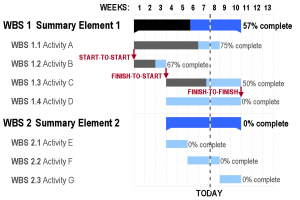 Although now regarded as a common charting technique, Gantt charts were considered revolutionary when they were introduced. In recognition of Henry Gantt's contributions, the Henry Laurence Gantt Medal is awarded for distinguished achievement in management and in community service. This chart is used also in Information Technology to represent data that has been collected.

The first known Gantt Chart was developed in 1896 by Karol Adamiecki, who called it a harmonogram. Adamiecki did not publish his chart until 1931, however, and then only in a language not popular in the West. The chart thus now bears the name of Henry Gantt (1861–1919), who designed his chart around the years 1910–1915 and popularized it in the West.[1][2][3]

In the 1980s, personal computers eased the creation and editing of elaborate Gantt charts. These desktop applications were intended mainly for project managers and project schedulers. In the late 1990s and early 2000s, Gantt charts became a common feature of web-based applications, including collaborative groupware.

Gantt charts have become a common technique for representing the phases and activities of a project work breakdown structure (WBS), so they can be understood by a wide audience.

A common error made by those who equate Gantt chart design with project design is that they attempt to define the project work breakdown structure at the same time that they define schedule activities. This practice makes it very difficult to follow the 100% Rule. Instead the WBS should be fully defined to follow the 100% Rule, then the project schedule can be designed.[citation needed]

Although a Gantt chart is useful and valuable for small projects that fit on a single sheet or screen, they can become quite unwieldy for projects with more than about 30 activities. Larger Gantt charts may not be suitable for most computer displays. A related criticism is that Gantt charts communicate relatively little information per unit area of display. That is, projects are often considerably more complex than can be communicated effectively with a Gantt chart.

Gantt charts only represent part of the triple constraints of projects, because they focus primarily on schedule management. Moreover, Gantt charts do not represent the size of a project or the relative size of work elements, therefore the magnitude of a behind-schedule condition is easily miscommunicated. If two projects are the same number of days behind schedule, the larger project has a larger impact on resource utilization, yet the Gantt does not represent this difference.

Although project management software can show schedule dependencies as lines between activities, displaying a large number of dependencies may result in a cluttered or unreadable chart.

Because the horizontal bars of a Gantt chart have a fixed height, they can misrepresent the time-phased workload (resource requirements) of a project. In the example shown in this article, Activities E and G appear to be the same size, but in reality they may be orders of magnitude different. A related criticism is that all activities of a Gantt chart show planned workload as constant. In practice, many activities (especially summary elements) have front-loaded or back-loaded work plans, so a Gantt chart with percent-complete shading may actually miscommunicate the true schedule performance status.