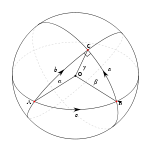 A geodesic triangle on the sphere. The geodesics are great circle arcs.

In mathematics, a geodesic (pronounced /ˌdʒi˝.ɵˈdi˝zɨk, ˌdʒi˝.ɵˈdɛsɨk/ JEE-o-DEE-zik, JEE-o-DES-ik) is a generalization of the notion of a "straight line" to "curved spaces". In the presence of a metric, geodesics are defined to be (locally) the shortest path between points on the space. In the presence of an affine connection, geodesics are defined to be curves whose tangent vectors remain parallel if they are transported along it.

The term "geodesic" comes from geodesy, the science of measuring the size and shape of Earth; in the original sense, a geodesic was the shortest route between two points on the Earth's surface, namely, a segment of a great circle. The term has been generalized to include measurements in much more general mathematical spaces; for example, in graph theory, one might consider a geodesic between two vertices/nodes of a graph.

Geodesics are of particular importance in general relativity, as they describe the motion of inertial test particles.

The shortest path between two points in a curved space can be found by writing the equation for the length of a curve (a function f from an open interval of R to the manifold), and then minimizing this length using the calculus of variations. This has some minor technical problems, because there is an infinite dimensional space of different ways to parametrize the shortest path. It is simpler to demand not only that the curve locally minimize length but also that it is parametrized "with constant velocity", meaning that the distance from f(s) to f(t) along the geodesic is proportional to |s−t|. Equivalently, a different quantity may be defined, termed the energy of the curve; minimizing the energy leads to the same equations for a "constant velocity" geodesic. Intuitively, one can understand this second formulation by noting that an elastic band stretched between two points will contract its length, and in so doing will minimize its energy; the resulting shape of the band is a geodesic.

In Riemannian geometry geodesics are not the same as "shortest curves" between two points, though the two concepts are closely related. The difference is that geodesics are only locally the shortest distance between points, and are parametrized with "constant velocity". Going the "long way round" on a great circle between two points on a sphere is a geodesic but not the shortest path between the points. The map t→t2 from the unit interval to itself gives the shortest path between 0 and 1, but is not a geodesic because the velocity of the corresponding motion of a point is not constant.

Geodesics are commonly seen in the study of Riemannian geometry and more generally metric geometry. In relativistic physics, geodesics describe the motion of point particles under the influence of gravity alone. In particular, the path taken by a falling rock, an orbiting satellite, or the shape of a planetary orbit are all geodesics in curved space-time. More generally, the topic of sub-Riemannian geometry deals with the paths that objects may take when they are not free, and their movement is constrained in various ways.

This article presents the mathematical formalism involved in defining, finding, and proving the existence of geodesics, in the case of Riemannian and pseudo-Riemannian manifolds. The article geodesic (general relativity) discusses the special case of general relativity in greater detail.

The most familiar examples are the straight lines in Euclidean geometry. On a sphere, the images of geodesics are the great circles. The shortest path from point A to point B on a sphere is given by the shorter piece of the great circle passing through A and B. If A and B are antipodal points (like the North pole and the South pole), then there are infinitely many shortest paths between them.

This generalizes the notion of geodesic for Riemannian manifolds. However, in metric geometry the geodesic considered is often equipped with natural parametrization, i.e. in the above identity v = 1 and

If the last equality is satisfied for all t1, t2 ∈I, the geodesic is called a minimizing geodesic or shortest path.

In a Riemannian manifold with metric tensor g, the length of a continuously differentiable curve γ : [a,b] → M is defined by

The distance d(p,q) between two points p and q of M is defined as the infimum of the length taken over all continuous, piecewise continuously differentiable curves γ : [a,b] → M such that γ(a) = p and γ(b) = q. With this definition of distance, geodesics in a Riemannian manifold are then the locally distance-minimizing paths, in the above sense.

The minimizing curves of L in a small enough open set of M can be obtained by techniques of calculus of variations. Typically, one introduces the following action or energy functional

It is then enough to minimize the functional E, owing to the Cauchy-Schwarz inequality

with equality if and only if |dγ/dt| is constant.

are the Christoffel symbols of the metric. This is the geodesic equation, discussed below.

Techniques of the classical calculus of variations can be applied to examine the energy functional E. The first variation of energy is defined in local coordinates by

The critical points of the first variation are precisely the geodesics. The second variation is defined by

In an appropriate sense, zeros of the second variation along a geodesic γ arise along Jacobi fields. Jacobi fields are thus regarded as variations through geodesics.

By applying variational techniques from classical mechanics, one can also regard geodesics as Hamiltonian flows. They are solutions of the associated Hamilton–Jacobi equations, with (pseudo-)Riemannian metric taken as Hamiltonian.

A geodesic on a smooth manifold M with an affine connection ∇ is defined as a curve γ(t) such that parallel transport along the curve preserves the tangent vector to the curve, so }} at each point along the curve, where

is the derivative with respect to

. More precisely, in order to define the covariant derivative of

it is necessary first to extend

to a continuously differentiable vector field in an open set. However, the resulting value of () is independent of the choice of extension.

Using local coordinates on M, we can write the geodesic equation (using the summation convention) as

are the coordinates of the curve γ(t) and

are the Christoffel symbols of the connection ∇. This is just an ordinary differential equation for the coordinates. It has a unique solution, given an initial position and an initial velocity. Therefore, from the point of view of classical mechanics, geodesics can be thought of as trajectories of free particles in a manifold. Indeed, the equation

The local existence and uniqueness theorem for geodesics states that geodesics on a smooth manifold with an affine connection exist, and are unique; this is a variant of the Frobenius theorem. More precisely:

where I is a maximal open interval in R containing 0.

In general, I may not be all of R as for example for an open disc in R2. The proof of this theorem follows from the theory of ordinary differential equations, by noticing that the geodesic equation is a second-order ODE. Existence and uniqueness then follow from the Picard-Lindelöf theorem for the solutions of ODEs with prescribed initial conditions. γ depends smoothly on both p and V.

where t ∈ R, V ∈ T(M) and γV denotes the geodesic with initial data

. Thus, Gt(V) = exp(tV) is the exponential map of the vector tV. A closed orbit of the geodesic flow corresponds to a closed geodesic on M.

More precisely, an affine connection gives rise to a splitting of the double tangent bundle TTM into horizontal and vertical bundles:

at each point v ∈ TM; here π∗ : TTM → TM denotes the pushforward (differential) along the projection π : TM → M associated to the tangent bundle.

More generally, the same construction allows one to construct a vector field for any Ehresmann connection on the tangent bundle. For the resulting vector field to be a spray (on the deleted tangent bundle TM \ {0}) it is enough that the connection be equivariant under positive rescalings: it need not be linear. That is, (cf. Ehresmann connection#Vector bundles and covariant derivatives) it is enough that the horizontal distribution satisfy

A particular case of a non-linear connection arising in this manner is that associated to a Finsler manifold.

where a and b are constant real numbers. Thus apart from specifying a certain class of embedded curves, the geodesic equation also determines a preferred class of parameterizations on each of the curves. Accordingly, solutions of () are called geodesics with affine parameter.

An affine connection is determined by its family of affinely parameterized geodesics, up to torsion (Spivak 1999, Chapter 6, Addendum I). The torsion itself does not, in fact, affect the family of geodesics, since the geodesic equation depends only on the symmetric part of the connection. More precisely, if

are two connections such that the difference tensor

, but with vanishing torsion.

Geodesics without a particular parameterization are described by a projective connection.