Geodetic systems or geodetic data are used in geodesy, navigation, surveying by cartographers and satellite navigation systems to translate positions indicated on their products to their real position on earth.

The systems are needed because the earth is not a perfect sphere.

Examples of map data are:

The difference in co-ordinates between data is commonly referred to as datum shift. The datum shift between two particular datums can vary from one place to another within one country or region, and can be anything from zero to hundreds of metres (or several kilometres for some remote islands). The North Pole, South Pole and Equator may be assumed to be in different positions on different datums, so True North may be very slightly different. Different datums use different estimates for the precise shape and size of the Earth (reference ellipsoids).

The difference between WGS84 and OSGB36 is up to 140 metres (450 feet), which for some navigational purposes is an insignificant error. For most applications, such as surveying and dive site location for SCUBA divers, 140 metres is an unacceptably large error.

The main reason that there are a number of datums is that before the advent of GPS positioning, national map making organizations did not have a common surveying reference point and only produced maps for their locality.

In surveying and geodesy, a datum is a reference point or surface against which position measurements are made, and an associated model of the shape of the earth for computing positions. Horizontal datums are used for describing a point on the earth's surface, in latitude and longitude or another coordinate system. Vertical datums are used to measure elevations or underwater depths.

The horizontal datum is the model used to measure positions on the earth. A specific point on the earth can have substantially different coordinates, depending on the datum used to make the measurement. There are hundreds of locally-developed horizontal datums around the world, usually referenced to some convenient local reference point. Contemporary datums, based on increasingly accurate measurements of the shape of the earth, are intended to cover larger areas. The WGS 84 datum, which is almost identical to the NAD83 datum used in North America, is a common standard datum.

A vertical datum is used for measuring the elevations of points on the earth's surface. Vertical data are either tidal, based on sea levels, gravimetric, based on a geoid, or geodetic, based on the same ellipsoid models of the earth used for computing horizontal datums.

In common usage, elevations are often cited in height above sea level; this is a widely used tidal datum. Because ocean tides cause water levels to change constantly, the sea level is generally taken to be some average of the tide heights. Mean lower low water — the average of the lowest points the tide reached on each day during a measuring period of several years — is the datum used for measuring water depths on some nautical charts, for example; this is called the chart datum. Whilst the use of sea-level as a datum is useful for geologically recent topographic features, sea level has not stayed constant throughout geological time, so is less useful when measuring very long-term processes.

A geodetic vertical datum takes some specific zero point, and computes elevations based on the geodetic model being used, without further reference to sea levels. Usually, the starting reference point is a tide gauge, so at that point the geodetic and tidal datums might match, but due to sea level variations, the two scales may not match elsewhere. One example of a geoid datum is NAVD88, used in North America, which is referenced to a point in Quebec, Canada. 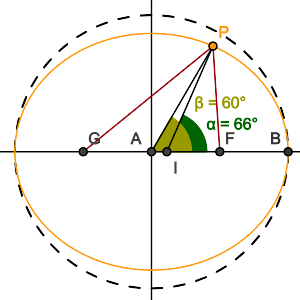 The same position on a spheroid has a different angle for latitude depending on whether the angle is measured from the normal (angle α) or around the center (angle β). Note that the "flatness" of the spheroid (orange) in the image is greater than that of the Earth; as a result, the corresponding difference between the "geodetic" and "geocentric" latitudes is also exaggerated.

). The ellipsoid is completely parameterised by the semi-major axis

It is important to note that geodetic latitude (

) is different from geocentric latitude (

Parameters for some geodetic systems

A more comprehensive list of geodetic systems can be found here

The global positioning system (GPS) uses the world geodetic system 1984 (WGS84) to determine the location of a point near the surface of the Earth.

Other Earth based coordinate systems 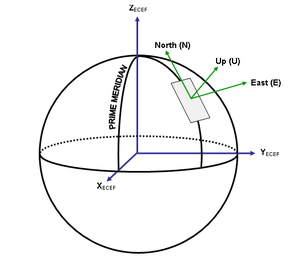 The Earth-centred Earth-fixed (ECEF) or conventional terrestrial coordinate system rotates with the Earth and has its origin at the centre of the Earth. The

axis passes through the equator at the prime meridian. The

axis passes through the north pole. The

axis can be determined by the right-hand rule to be passing through the equator at 90o longitude.

In many targeting and tracking applications the local East, North, Up (ENU) Cartesian coordinate system is far more intuitive and practical than ECEF or Geodetic coordinates. The local ENU coordinates are formed from a plane tangent to the Earth's surface fixed to a specific location and hence it is sometimes known as a "Local Tangent" or "local geodetic" plane. By convention the east axis is labeled

In an airplane most objects of interest are below you, so it is sensible to define down as a positive number. The NED coordinates allow you to do this as an alternative to the ENU local tangent plane. By convention the north axis is labeled

. To avoid confusion between

, etc in this web page we will restrict the local coordinate frame to ENU.

From geodetic to ECEF coordinates

) can be converted into ECEF coordinates using the following formulae:

are the semi-major axis and the square of the first numerical eccentricity of the ellipsoid respectively.

is called the Normal and is the distance from the surface to the Z-axis along the ellipsoid normal.

From ECEF to ENU Coordinates

To transform from ECEF coordinates to the local coordinates we need a local reference point, typically this might be the location of a radar. If a radar is located at

and an aircraft at

is the geodetic latitude. A prior version of this page showed use of the geocentric latitude (

The geocentric and geodetic longitude have the same value. This is true for the Earth and other similar shaped planets because their latitude lines (parallels) can be considered in much more degree perfect circles when compared to their longitude lines (meridians).

requires knowledge of which quadrant the coordinates lie in.

As before it is done in two stages

From ENU to ECEF

From ECEF to geodetic coordinates

The conversion of ECEF coordinates to geodetic coordinates (such WGS84) is a much harder problem. A number of techniques are available but the most accurate according to Zhu (Ref 6), is the following 15 step procedure summarised by Kaplan. It is assumed that geodetic parameters 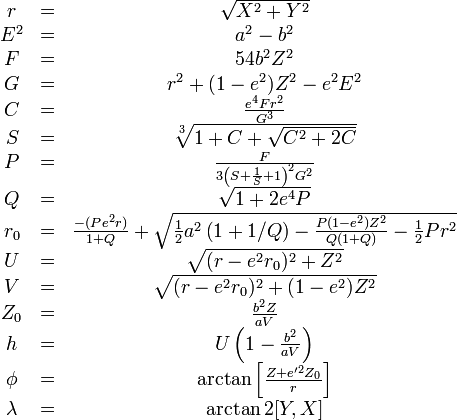 From WGS-84 to ENU: sample code

This code works with both MATLAB and GNU Octave. It is useful for converting GPS measurements into the local ENU coordinate system.

From ENU to WGS-84: sample code

Note: atan2(Y,X) uses quadrant information to return a value of lambda between

The use of a reference datum allows for the measurement of other quantities (locations, layers etc.) with reference to an original, set datum or surface. [1] A reference datum is needed because different users of a map may have several options or coordinates for the same point, depending upon which datum they choose to use or which datum is specified by the map. The ability to set your datum in a GPS, GIS, or other geographically referenced system allows the user to select specifically what areas they want to be the most accurate on the earth for their purpose. [2]