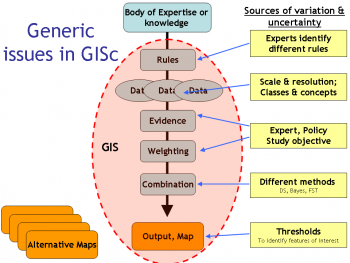 Geographic information science (GISc or GISci) is the academic theory behind the development, use, and application of geographic information systems (GIS). It is concerned with people, hardware, software, and geospatial data. GISc addresses fundamental issues raised by the use of GIS and related information technologies (Goodchild 1990, 1992; Wilson and Fotheringham 2007).

Three central issues of GISc are the modifiable areal unit problem, complete spatial randomness and spatial autocorrelation. GISc is relevant to researchers from many scientific disciplines because these three central issues are often ignored in the application of statistical hypothesis testing. GISc argues that both Bayesian and Traditional statistical inference should consider spatial structure of the data being analyzed.

Complete spatial randomness is also referred to as global spatial homogeneity. Spatial autocorrelation is also referred to as global spatial heterogeneity. These terms depend on scale. For example, a spatially homogeneous dataset at a global scale may be heterogeneous at a local scale. Likewise, globally heterogeneous spatial data can be locally homogeneous, data values at near places being more similar than values at further places.

The terminology of GISc is contestable because the definitions of the words depend on user preference. GISc is one of two main types of Information Science.

Geographic refers to spatial dimensions, particularly but not necessarily on Earth's land. Science refers to inferences about natural law based on either classical statistical hypothesis testing or Bayesian statistics. Non-science is the writing of opinions without reference to analysis of measured data. Science and literature are two types of art, art is a type of culture, culture is a type of human thought.

Technology is the use of machines to solve human problems. Non-technology is the beauty, the art, the emotional enjoyments that make animals feel joy, and the civilized culture that defines humanity apart from other animals. GISc is entangled with technology but distinctions can be made. Information Technology emphasizes the machines and the hardware. Whereas, Information Science is focused on how humans use information to understand nature (humanity being one small type of nature). Information Science emphasizes the logic, methods, software, the mental structures.

Information is one type of human thought. Data is one type of information, particularly the archival of information for later use. Two basic types of information are spatial and temporal. There are nine basic types of data: words, numbers, symbols, points, lines, areas, volumes, tones and rhythms. Vision and hearing are the primary information senses for which we archive data. For example a movie is a time series of images, images are made from pixels. Pixels are a type of point data, regularly spaced rather than irregularly spaced. So the data storage of a movie is a time series of regularly spaced points representing red, green, blue colors. Geographic Information systems focus primarily on spatial data types: points, lines and areas, tied to a relational database. Much of what we think of as Information Science is actually Temporal Information Science, as opposed to Geographic Information Science. Of course space-time is one thing but it is very useful to separate space and time when we store data in computers.

Geographic data usually refers to the spatial database records tied with points, lines or areas. Geographic information is the result of an interpretation of both the world and of mapped data. As the real world is complex, choices over how the features of interest are described in the database, such as how the percentage canopy closure for a given forest results in alternative but equally valid interpretations of the same raw data. Thus, in the creation of informational representations from data, choices about how and what to map are made. It is important to recognize that information is socially constructed, as it depends on decisions and choices, themselves influenced by institutional and political contexts. Objective measurement of the empirical world is impossible to achieve without a subjective researcher and database designer. The entanglement of a subjective observer and the objective true world is the topic of phenomenology. People influence the information, the information influences people.

Because of these issues and many others, it is therefore useful to reflect on what it is we do with a GIS. Thus GISc is concerned with issues relating to representation, ontology, topology, error, and inconsistency. Uncertainty is introduced in almost every stage of the operation of a GIS, as there are subjective choices to be made. Users of GIS should try to bear in mind the political and social dimensions of using GIS and maps to represent "a truth" to an audience.