The Geography (also known as Geographia, Cosmographia, or Geographike Hyphegesis) is Ptolemy's main work besides the Almagest. It is a treatise on cartography [1] and a compilation of what was known about the world's geography in the Roman Empire of the 2nd century. Ptolemy relied mainly on the work of an earlier geographer, Marinus of Tyre, and on gazetteers of the Roman and ancient Persian empire, but most of his sources beyond the perimeter of the Empire were unreliable.

The Geographia comprises two parts: Book 1, a discussion of the data and of the methods used; and Books 2–5, an atlas. The original work included maps, but due to the difficulties involved in copying them by hand, they have fallen out of the manuscript transmission. The work has been discovered and used through the ages by several noted people around the world. Arabic writer al-Mas'udi, while writing around 956, mentioned a colored map of the Geography which had 4530 cities and over 200 mountains. Byzantine monk Maximus Planudes found a copy of the Geography in 1295, and since there were no maps in his copy, he drew his own based on the coordinates found in the text. In 1397 a copy was given to Palla Strozzi in Florence by Emanuel Chrysoloras. The first Latin translation – Geographia Claudii Ptolemaei – was made in 1406 by Florentine Giacomo da Scarperia (latinsed name Jacobus Angelus), and since this, various translations in other languages have been made available to people all over the world.

As with the model of the solar system in the Almagest, Ptolemy put all this information into a grand scheme. He assigned coordinates to all the places and geographic features he knew, in a grid that spanned the globe. Latitude was measured from the equator, as it is today, but Ptolemy preferred to express it as the length of the longest day rather than degrees of arc (the length of the midsummer day increases from 12h to 24h as one goes from the equator to the polar circle). He put the meridian of 0 longitude at the most western land he knew, the Canary Islands. 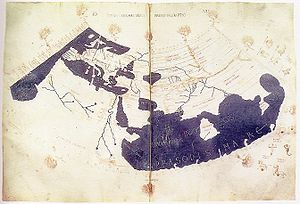 The Ptolemy world map, reconstituted from Ptolemy's Geographia (circa 150), indicating the countries of "Serica" and "Sinae" (China) at the extreme right, beyond the island of "Taprobane" (Sri Lanka, oversized) and the "Aurea Chersonesus" (Southeast Asian peninsula).

Ptolemy also devised and provided instructions on how to create maps both of the whole inhabited world (oikoumenè) and of the Roman provinces. In the second part of the Geographia he provided the necessary topographic lists, and captions for the maps. His oikoumenè spanned 180 degrees of longitude from the Canary islands in the Atlantic Ocean to China, and about 80 degrees of latitude from the Arctic to the East Indies and deep into Africa; Ptolemy was well aware that he knew about only a quarter of the globe.

Maps based on scientific principles had been made since the time of Eratosthenes (3rd century BC), but Ptolemy improved projections. It is known that a world map based on the Geographia was on display in Autun, Gaul in late Roman times. 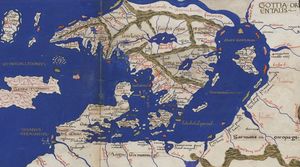 Reception in the Renaissance

Ptolemy's text reached Italy from Constantinople about 1400. The first printed edition, probably in 1477 in Bologna, was also the first printed book with engraved illustrations. Many editions followed (more often using woodcut in the early days), some following traditional versions of the maps, and others updating them.[2] An edition printed at Ulm in 1482 was the first one printed north of the Alps. Also in 1482, Francesco Berlinghieri printed the first edition in vernacular Italian. The maps look distorted as compared to modern maps, because Ptolemy's data was inaccurate. One reason is that Ptolemy estimated the size of the Earth as too small: while Eratosthenes found 700 stadia for a degree on the globe, in the Geographia Ptolemy uses 500 stadia. It is not certain if these geographers used the same stadion, but if we assume that they both stuck to the traditional Attic stadion of about 185 meters, then the older estimate is 1/6 too large, and Ptolemy's value is 1/6 too small. Because Ptolemy derived most of his topographic coordinates by converting measured distances to angles, his maps get distorted. So his values for the latitude were in error by up to 2 degrees. For longitude this was even worse, because there was no reliable method to determine geographic longitude; Ptolemy was well aware of this. It remained a problem in geography until the invention of marine chronometers at the end of the 18th century. It must be added that his original topographic list cannot be reconstructed: the long tables with numbers were transmitted to posterity through copies containing many scribal errors, and people have always been adding or improving the topographic data: this is a testimony to the persistent popularity of this influential work in the history of cartography.