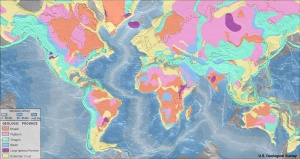 A geologic map or geological map is a special-purpose map made to show geological features. Rock units or geologic strata are shown by color or symbols to indicate surface coverage. Structural features are shown with strike and dip symbols which consist of (at minimum) a long line, a number, and a short line which are used to indicate tilted beds. The long line is the strike line, which shows the true horizontal direction along the bed, the number is the dip or number of degrees of tilt above horizontal, and the short line is the dip line, which shows the direction of tilt.

Stratigraphic contour lines may be used to illustrate the surface of a selected stratum illustrating the subsurface topographic trends of the strata. Isopach maps detail the variations in thickness of stratigraphic units. It is not always possible to properly show this when the strata are extremely fractured, mixed, in some discontinuities, or where they are otherwise disturbed.

The oldest preserved geologic map is the Turin papyrus, created around 1150 B.C. and depicting gold deposits and mines in ancient Egypt.[1] The first geologic map of Great Britain was created by William Smith in 1815.[2]

Maps and mapping across the globe 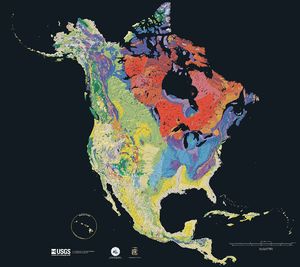 In the United States, geologic maps are usually superimposed over a topographic map (and at times over other base maps) with the addition of a color mask with letter symbols to represent the kind of geologic unit. The color mask denotes the exposure of the immediate bedrock, even if obscured by soil or other cover. Each area of color denotes a geologic unit or particular rock formation (as more information is gathered new geologic units may be defined). However, in areas where the bedrock is overlain by a significantly thick unconsolidated burden of till, terrace deposits, loess deposits, or other important feature, these are shown instead. Stratigraphic contour lines, fault lines, strike and dip symbols, are represented with various symbols as indicated by the map key. Whereas topographic maps are produced by the United States Geological Survey in conjunction with the states, geologic maps are usually produced by the individual states. There are almost no geologic map resources for some states, while a few states, such as Kentucky, are extensively mapped geologically.

In the United Kingdom the term geological map is used. The UK and Isle of Man have been extensively mapped by the British Geological Survey since 1835; a separate Geological Survey of Northern Ireland (drawing on BGS staff) has operated since 1947.

Sheets of all scales (though not for all areas) fall into two categories:

The maps are superimposed over a topographic map base produced by Ordnance Survey, and use symbols to represent fault lines, strike and dip or geological units, boreholes etc. Colors are used to represent different geological units. Explanatory booklets (memoirs) are produced for many sheets at the 1:50,000 scale.

Although BGS maps show the National Grid and employ an OS base map, sheet boundaries are not based on the grid. The 1:50,000 sheets originate from earlier 'one inch to the mile' (1:63,630) coverage utilising the pre-grid Ordnance Survey One Inch Third Edition as the base map. Current sheets are a mixture of modern field mapping at 1:10,000 redrawn at the 1:50,000 scale and older 1:63,630 maps reproduced on a modern base map at 1:50,000. In both cases the original OS Third Edition sheet margins and numbers are retained. The 1:250,000 sheets are defined using lines of latitude and longitude, each extending 1° north-south and 2° east-west.

The first geologic map of Singapore was produced in 1974, produced by the then Public Work Department. The publication include a locality map, 8 map sheets detailing the topography and geological units, and a sheet containing cross sections of the island.

Since 1974, for 30 years, there were many finding reported in various technical conferences on new found geology islandwide, but no new publication was produced. In 2006, Defence Science & Technology Agency, with their developments in underground space promptly started a re-publication of the Geology of Singapore, second edition. The new edition that was published in 2009, contains a 1:75,000 geology map of the island, 6 maps (1:25,000) containing topography, street directory and geology, a sheet of cross section and a locality map.

The difference found between the 1976 Geology of Singapore report include numerous formations found in literature between 1976 and 2009. These include the Fort Canning Boulder Beds and stretches of limestones.