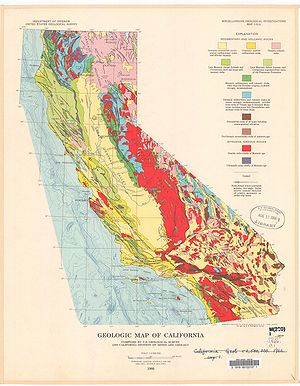 Geology (from the Greek γῆ, gê, "earth" and λόγος, logos, "speech") is the science and study of the solid and liquid matter that constitutes the Earth. The field of geology encompasses the study of the composition, structure, physical properties, dynamics, and history of Earth materials, and the processes by which they are formed, moved, and changed. The field is a major academic discipline, and is also important for mineral and hydrocarbon extraction, knowledge about and mitigation of natural hazards, some engineering fields, and understanding past climates and environments.[1] 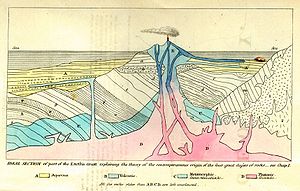 Geology is among a group of scientific disciplines under the more general field of Earth Science, or geoscience, which also includes Paleontology, Geophysics, Seismology, Mineralogy, Oceanography, Geomorphology and Glaciology, among others.

According to Charles Lyell's Principles of Geology, "Geology is the science which investigates the successive changes that have taken place in the organic and inorganic kingdoms of nature; it enquires into the causes of these changes, and the influence which they have exerted in modifying the surface and external structure of our planet. By these researches into the state of the earth and its inhabitants at former periods, we acquire a more perfect knowledge of its present condition, and more comprehensive views concerning the laws now governing its animate and inanimate productions."[2] Conversely, Lyell indicates that by observing the natural processes that operate today and the relationships that exist between the various landforms, fossils and living things, one can infer the origin and age relationships of the present landscape and its life-forms. More succinctly, and to paraphrase Scottish geologist James Hutton, "the present is the key to the past," or that the processes which now occur, such as erosion, deposition, reef formation, earthquakes and volcanism, given enough time, can explain the current state of the Earth's surface.