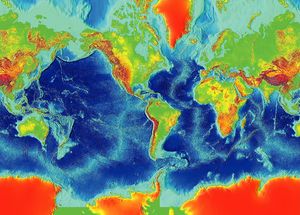 Surface of the Earth

Geomorphology (from Greek: γη, ge, "earth"; μοϝφή, morfé, "form"; and λόγος, logos, "knowledge") is the scientific study of landforms and the processes that shape them. Geomorphologists seek to understand why landscapes look the way they do: to understand landform history and dynamics, and predict future changes through a combination of field observation, physical experiment, and numerical modeling. Geomorphology is practiced within geology, engineering geology, geodesy, geography, archaeology, and geological engineering. Early studies in geomorphology are the foundation for pedology, one of two main branches of soil science.

Landforms evolve in response to a combination of natural and anthropogenic processes. The landscape is built up through uplift and volcanism. Denudation occurs by erosion and mass wasting, which produces sediment that is transported and deposited elsewhere within the landscape or off the coast. Landscapes are also lowered by subsidence, either due to tectonics or physical changes in underlying sedimentary deposits. These processes are each influenced differently by climate, ecology, and human activity.

Practical applications of geomorphology include measuring the effects of climate change, hazard assessments including landslide prediction and mitigation, river control and restoration, coastal protection, and assessing the presence of water on Mars.

Perhaps the earliest one to devise a theory of geomorphology was the polymath Chinese scientist and statesman Shen Kuo (1031-1095 AD). This was based on his observation of marine fossil shells in a geological stratum of a mountain hundreds of miles from the Pacific Ocean. Noticing bivalve shells running in a horizontal span along the cut section of a cliffside, he theorized that the cliff was once the pre-historic location of a seashore that had shifted hundreds of miles over the centuries. He inferred that the land was reshaped and formed by soil erosion of the mountains and by deposition of silt, after observing strange natural erosions of the Taihang Mountains and the Yandang Mountain near Wenzhou. Furthermore, he promoted the theory of gradual climate change over centuries of time once ancient petrified bamboos were found to be preserved underground in the dry, northern climate zone of Yanzhou, which is now modern day Yan'an, Shaanxi province.

The first geomorphic model was the geographical cycle or the cycle of erosion, developed by William Morris Davis between 1884 and 1899. The cycle was inspired by theories of uniformitarianism which were first formulated by James Hutton (1726-1797). Concerning valley forms, the cycle was depicted as a sequence by which a river would cut a valley more and more deeply, but then erosion of side valleys would eventually flatten out the terrain again, now at a lower elevation. The cycle could be started over by uplift of the terrain. The model is today considered too much of a simplification to be especially useful in practice..

Walther Penck developed an alternative model in the 1920s, based on ratios of uplift and erosion, but it was also too weak to explain a variety of landforms. G. K. Gilbert was an important early American geomorphologist. 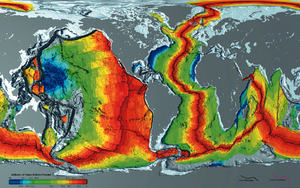 Modern geomorphology focuses on the quantitative analysis of interconnected processes, such as the contribution of solar energy, the rates of steps of the hydrologic cycle, plate movement rates from geophysics to compute the age and expected fate of landforms and the weathering and erosion of the land. The use of more precise measurement technique has also enabled processes like erosion to be observed directly, rather than merely surmised from other evidence. Computer simulation is also valuable for testing that a particular model yields results with properties similar to real terrain.

Rivers and streams are not only conduits of water, but also of sediment. The water, as it flows over the channel bed, is able to mobilize sediment and transport it downstream, either as bedload, suspended load or dissolved load. The rate of sediment transport depends on the availability of sediment itself and on the river's discharge.

As rivers flow across the landscape, they generally increase in size, merging with other rivers. The network of rivers thus formed is a drainage system and is often dendritic, but may adopt other patterns depending on the regional topography and underlying geology.

Soil, regolith, and rock move downslope under the force of gravity via creep, slides, flows, topples, and falls. Such mass wasting occurs on both terrestrial and submarine slopes, and has been observed on Earth, Mars, Venus, Titan and Iapetus.

Glaciers, while geographically restricted, are effective agents of landscape change. The gradual movement of ice down a valley causes abrasion and plucking of the underlying rock. Abrasion produces fine sediment, termed glacial flour. The debris transported by the glacier (till), when the glacier recedes, is termed a moraine. Glacial erosion is responsible for U-shaped valleys, as opposed to the V-shaped valleys of fluvial origin. Wet-base glaciers (those in which liquid water flows underneath) produce distinctive deposits such as eskers, kames and varves.

This results from chemical dissolution of rock and from the mechanical wearing of rock by plant roots, ice expansion, and the abrasive action of sediment. Weathering provides the source of the sediment transported by fluvial, glacial, aeolian, or biotic processes.

Although geomorphometry started with ideas of Brisson (1808) and Gauss (1827), the field did not evolve much until the construction of the first DEM (Miller and Laflamme, 1958). With the rapid increase of sources of DEMs today (and especially due to the Shuttle Radar Topography Mission and LIDAR-based projects), extraction of land surface parameters is becoming more and more attractive to numerous fields ranging from precision agriculture, soil-landscape modelling, climatic and hydrological applications to urban planning, education and space research. The topography of almost all Earth has been today sampled or scanned, so that DEMs are available at resolutions of 100 m or better at global scale. Land surface parameters are today successfully used for both stochastic and process-based modelling, the only remaining issue being the level of detail and vertical accuracy of the DEM.