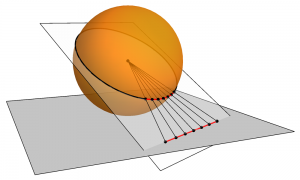 The gnomonic map projection displays all great circles as straight lines. In other words, it views the the surface data from the center of the earth.

Thus the shortest route between two locations in reality corresponds to that on the map. This is achieved by projecting, with respect to the center of the Earth (hence perpendicular to the surface), the Earth's surface onto a tangent plane. The least distortion occurs at the tangent point. Less than half of the sphere can be projected onto a finite map.

Since Meridians and the Equator are great circles, they are always shown as straight lines. 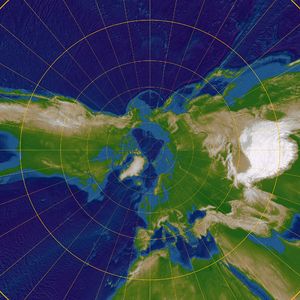 Gnomonic projection of Earth centered on the geographic North Pole

As for all azimuthal projections, angles from the tangent point are preserved. The map distance from that point is a function r(d) of the true distance d, given by

where R is the radius of the Earth. The radial scale is

and the transverse scale

so the transverse scale increases outwardly, and the radial scale even more.

The gnomonic projection is said to be the oldest map projection, developed by Thales in the 6th century BC.

Another relevant application of the Gnomonic projection lies in aviation. Aircraft pilots use the gnomonic projection to find and use the shortest route between point A and point B. If you have ever flown on an airplane, you may have recognized that the plane seems to take a rounded path on the map tracking the airplane's location. This is actually not a curved path, but rather a straight path on a sphere between two points. The path is just portrayed on a different map projection that shows the whole earth as a flat surface. This is often called the "great circle route" and is the shortest route for the plane to fly. [1]

Here is an example of a great circle route pilots may follow. It is the shortest route between Tokyo and Los Angeles.

In 1946 Buckminster Fuller patented a projection method similar to the Gnomonic Projection in his cuboctahedral version of the Dymaxion map. The 1954 icosahedral version he published under the title of AirOcean World Map, and this is the version most commonly referred to today.