From wiki.gis.com
(Redirected from Graticule)
Jump to: navigation, search 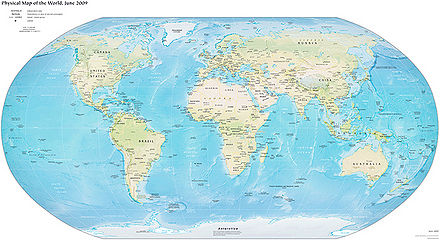 A geographic coordinate system (GCS) defines locations on the earth using a three-dimensional spherical surface [1], it is a reference system that uses latitude and longitude to identify locations on a spheroid or sphere. A datum, prime meridian, and angular unit are parts of a GCS[2].

The Earth is not a sphere, but an irregular shape approximating an ellipsoid; the challenge is to define a coordinate system that can accurately state each topographical point as an unambiguous tuple of numbers [3].

Latitude (abbreviation: Lat., φ, or phi) is the angle from a point on the Earth's surface to the equatorial plane, measured from the center of the sphere. Lines joining points of the same latitude are called parallels, which trace concentric circles on the surface of the Earth, parallel to the equator. The north pole is 90° N; the south pole is 90° S. The 0° parallel of latitude is designated the equator, the fundamental plane of all geographic coordinate systems. The equator divides the globe into Northern and Southern Hemispheres.

Longitude (abbreviation: Long., λ, or lambda) is the angle east or west of a reference meridian between the two geographical poles to another meridian that passes through an arbitrary point. All meridians are halves of great circles, and are not parallel. They converge at the north and south poles.

In 1884, the United States hosted the International Meridian Conference and twenty-five nations attended. Twenty-two of them agreed to adopt the location of Greenwich as the zero-reference line. San Domingo voted against the adoption of that motion, while France and Brazil abstained [4]. To date, there exist organizations around the world which continue using historical prime meridians before the acceptance of Greenwich and the ill-attended conference became common-place [5].

The combination of these two components specifies the position of any location on the planet, but does not consider altitude nor depth.

For example, Baltimore, Maryland (in the USA) has a latitude of 39.3° North, and a longitude of 76.6° West. So, a vector drawn from the center of the Earth to a point 39.3° north of the equator and 76.6° west of Greenwich will pass through Baltimore.

This latitude/longitude "webbing" is known as the conjugate graticule.

Degrees: a measurement of angle

There are several formats for writing degrees, all of them appearing in the same Lat, Long order.

DMS is the most common format, and is standard on all charts and maps, as well as Global Positioning Systems (GPS) and geographic information systems (GIS). DD is the most convenient if a need for calculation or computation might arise, avoiding the complexity and likely introduction of errors by mixed radix degree minute second arithmetic.

To completely specify a location of a topographical feature on, in, or above the Earth, one has to also specify the vertical distance from the centre of the sphere, or from the surface of the sphere. Because of the ambiguity of "surface" and "vertical", it is more commonly expressed relative to a more precisely defined vertical datum such as mean sea level at a named point. Each country has defined its own datum. In the United Kingdom, the reference point is Newlyn. The distance to Earth's centre can be used both for very deep positions and for positions in space.[3]

Every point that is expressed in spherical coordinates can be expressed as an x y z coordinate. This is not a useful method for recording a position on maps but is used to calculate distances and to perform other mathematical operations. The origin is usually the center of the sphere, a point close to the center of the Earth. 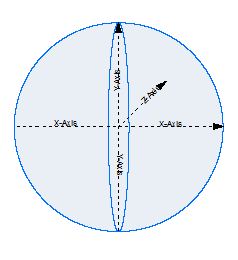 Shape of the Earth

The Earth is not a sphere, but an irregular shape approximating a biaxial ellipsoid. It is nearly spherical, but has an equatorial bulge making the radius at the equator about 0.3% larger than the radius measured through the poles. The shorter axis approximately coincides with axis of rotation. Map-makers choose the true ellipsoid that best fits their need for the area they are mapping. They then choose the most appropriate mapping of the spherical coordinate system onto that ellipsoid. In the United Kingdom there are three common latitude, longitude, height systems in use. The system used by GPS, WGS84, differs at Greenwich from the one used on published maps OSGB36 by approximately 112m. The military system ED50, used by NATO, differs by about 120m to 180m.[3]

Though early navigators thought of the sea as a flat surface that could be used as a vertical datum, this is far from reality. The Earth can be thought to have a series of layers of equal potential energy within its gravitational field. Height is a measurement at right angles to this surface, and although gravity pulls mainly toward the centre of Earth, the geocentre, there are local variations. The shape of these layers is irregular but essentially ellipsoidal. The choice of which layer to use for defining height is arbitrary. The reference height we have chosen is the one closest to the average height of the world's oceans. This is called the geoid [3][7].

The Earth is not static as points move relative to each other due to continental plate motion, subsidence, and diurnal movement caused by the Moon and the tides. The daily movement can be as much as a metre. Continental movement can be up to 10 cm a year, or 10 m in a century. A weather system high-pressure area can cause a sinking of 5 mm. Scandinavia is rising by 1 cm a year as a result of the melting of the ice sheets of the last ice age, but neighbouring Scotland is only rising by 0.2 cm. These changes are insignificant if a local datum is used, but are significant if the global GPS datum is used.[3]

The width of one longitudinal degree on latitude

can be calculated by this formula (to get the width per minute and second, divide by 60 and 3600, respectively):

approximately equals 6,367,449 m. Due to the average radius value used, this formula is of course not precise. You can get a better approximation of a longitudinal degree at latitude

where Earth's equatorial and polar radii,

Latitude and longitude values can be based on several different geodetic systems or datums, the most common being WGS 84 used by all GPS equipment [8]. Other datums however are significant because they were chosen by a national cartographical organisation as the best method for representing their region, and these are the datums used on printed maps. Using the latitude and longitude found on a map may not give the same reference as on a GPS receiver. Coordinates from the mapping system can sometimes be changed into another datum using a simple translation. For example, to convert from ETRF89 (GPS) to the Irish Grid add 49 metres to the east, and subtract 23.4 metres from the north.[9] More generally one datum is changed into any other datum using a process called Helmert transformations. This involves converting the spherical coordinates into Cartesian coordinates and applying a seven parameter transformation (translation, three-dimensional rotation), and converting back [3].

False Origin is the location of the starting coordinates, chosen to the south and west of the true origin of a rectangular coordinate system. False origins are used to avoid negative coordinates. Negative coordinates are avoided because they can confuse the reader, by leading the reader to believe that the location is on the opposite hemisphere of the Earth. A negative false origin shifts the range of values in the negative direction. A positive false origin shifts the range of values in the positive direction. There are both false northings and false eastings, which allow for the coordinates to be adjusted correctly. The UTM mapping system is a common example of a coordinate system that uses a false origin with false eastings and northings.

First, take note of which datum you will need (WGS-84, Clarke 1866, etc.), including the equatorial and polar radius. Then, follow the formula listed below [11]:

For further information on these equations or how to calculate the arc, check http://www.uwgb.edu/dutchs/usefuldata/utmformulas.htm.