From wiki.gis.com
Jump to: navigation, search
For other uses, see Height (disambiguation). 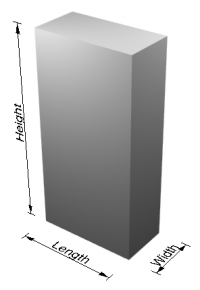 A cuboid demonstrating the dimensions length, width, and height

Height is the measurement of vertical distance, but has two meanings in common use. It can either indicate how "tall" something is, or how "high up" it is. For example one could say "That is a tall building", or "That airplane is high up in the sky". These can both be referred to as the height of the object, as in "The height of the building is 50 m" or "The height of the airplane is 10,000 m". When used to describe how high something like an airplane or mountain peak is from sea level, height is more often called altitude. Height is measured along the vertical (y) axis between a specified point and another point.

For more details on this topic, see Height (mathematics).

Dimensional models assert height as the third dimension, more accurately referred to as depth, the other two being length and width, which form a two-dimensional plane of reference. In this model, the dimension of height is measured along a line traveling from the point in question and intersecting the plane of reference at a 90 degree angle.

Although height is relative to a plane of reference, most measurements of height in the physical world are based upon a zero surface, known as sea level. Both altitude and elevation, two synonyms for height, are usually defined as the position of a point above the mean sea level. One can extend the sea-level surface under the continents: naively, one can imagine a lot of narrow canals through the continents. In practice, the sea level under a continent has to be computed from gravity measurements, and slightly different computational methods exist; see Geodesy, heights.

Instead of using the sea level, geodesists often prefer to define height from the surface of a reference ellipsoid, see Geodetic system, vertical datum.

Human height is one of the areas of study within anthropometry. As pointed out in an article [1] in The New Yorker, the average height of human populations appears to be a convenient metric for all the factors that make up a group's well-being.[1] While height variations within a population are largely genetic, height variations between populations are mostly environmental.

The United Nations uses height (among other statistics) to monitor nutritional standards in developing nations. In human populations, average height can distill down complex data about the group's birth, upbringing, social class, diet, and health care system. However, the height of a human is not always directly connected or related to such things as nutrition, social class, etc.