From wiki.gis.com
Jump to: navigation, search
For the histograms used in digital image processing, see Image histogram and Color histogram. 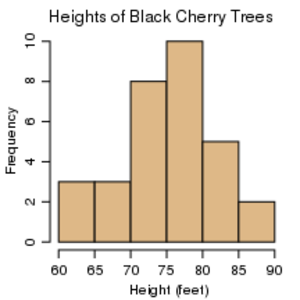 An example histogram of the heights of 31 Black Cherry trees.

In statistics, a histogram is a graphical display of tabulated frequencies, shown as bars. It shows what proportion of cases fall into each of several categories: it is a form of data binning. The categories are usually specified as non-overlapping intervals of some variable. The categories (bars) must be adjacent. The intervals (or bands, or bins) are generally of the same size.[1]

Histograms are used to plot density of data, and often for density estimation: estimating the probability density function of the underlying variable. The total area of a histogram used for probability density is always normalized to 1. If the length of the intervals on the x-axis are all 1, then a histogram is identical to a relative frequency plot.

An alternative to the histogram is kernel density estimation, which uses a kernel to smooth samples. This will construct a smooth probability density function, which will in general more accurately reflect the underlying variable.

The histogram is one of the seven basic tools of quality control, which also include the Pareto chart, check sheet, control chart, cause-and-effect diagram, flowchart, and scatter diagram.

The word histogram derived from the Greek histos 'anything set upright' (as the masts of a ship, the bar of a loom, or the vertical bars of a histogram); and gramma 'drawing, record, writing'. The term was introduced by Karl Pearson in 1895.[2]

As an example we consider data collected by the U.S. Census Bureau on time to travel to work (2000 census, [1], Table 2). The census found that there were 124 million people who work outside of their homes. This rounding is a common phenomenon when collecting data from people. 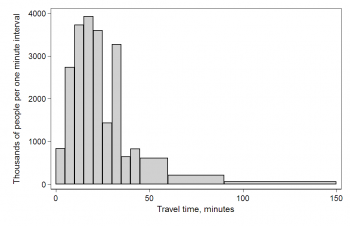 Histogram of travel time, US 2000 census. Area under the curve equals the total number of cases. This diagram uses Q/width from the table. 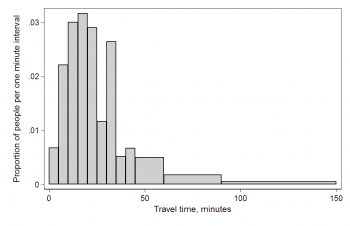 Histogram of travel time, US 2000 census. Area under the curve equals 1. This diagram uses Q/total/width from the table.

This histogram differs from the first only in the vertical scale. The height of each bar is the decimal percentage of the total that each category represents, and the total area of all the bars is equal to 1, the decimal equivalent of 100%. The curve displayed is a simple density estimate. This version shows proportions, and is also known as a unit area histogram.

In other words a histogram represents a frequency distribution by means of rectangles whose widths represent class intervals and whose areas are proportional to the corresponding frequencies. They only place the bars together to make it easier to compare data.

The SOCR resource pages contain a number of hands-on interactive activities demonstrating the concept of a histogram, histogram construction and manipulation using Java applets and charts. 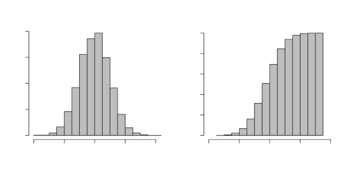 An ordinary and a cumulative histogram of the same data. The data shown is a random sample of 10,000 points from a normal distribution with a mean of 0 and a standard deviation of 1.

In a more general mathematical sense, a histogram is a mapping

that counts the number of observations that fall into various disjoint categories (known as bins), whereas the graph of a histogram is merely one way to represent a histogram. Thus, if we let

be the total number of observations and

be the total number of bins, the histogram

Number of bins and width

There is no "best" number of bins, and different bin sizes can reveal different features of the data. Some theoreticians have attempted to determine an optimal number of bins, but these methods generally make strong assumptions about the shape of the distribution. You should always experiment with bin widths before choosing one (or more) that illustrate the salient features in your data.

The number of bins

can be calculated directly, or from a suggested bin width

The braces indicate the ceiling function.

which implicitly bases the bin sizes on the range of the data, and can perform poorly if

is the sample standard deviation.

which is based on the interquartile range.

The idea of a histogram can be generalized to continuous data. Let

can be defined by:

is the value of a stationary point.